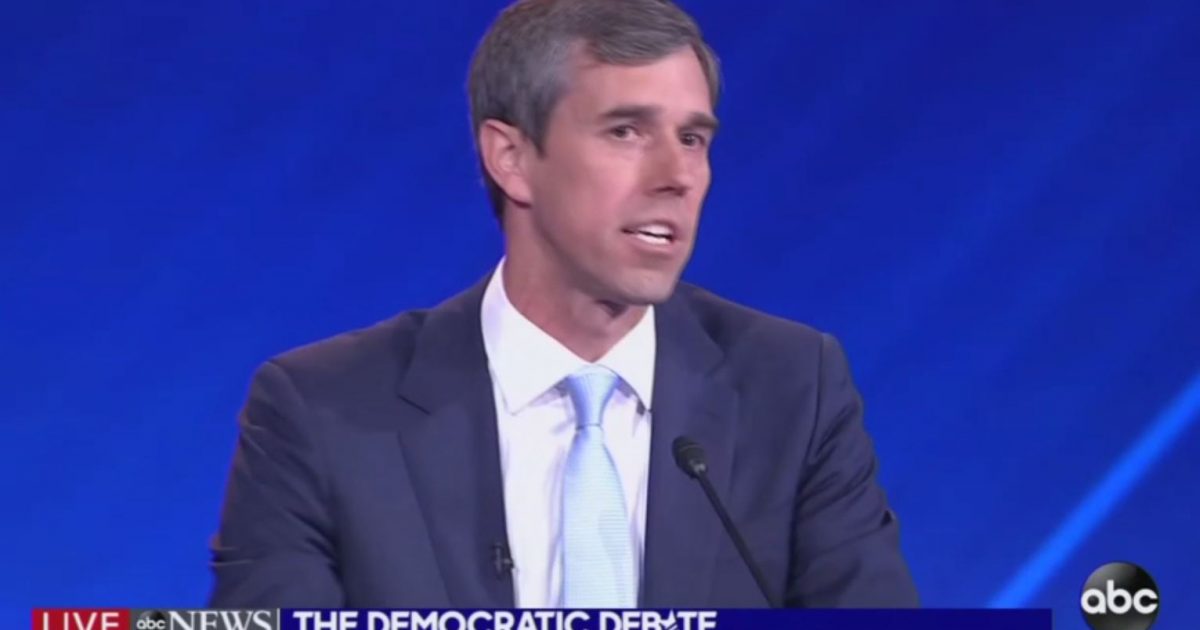 While participating in a debate hosted by ABC News on Thursday, Beto O’Rourke, the dirt-eating, America-hating, wannabe tyrant who said he would make gun owners sell their weapons to the government, doubled down, telling debate co-moderator David Muir, “hell, yes,” he intends to take guns he doesn’t think law-abiding gun owners should be allowed to own.

“Hell, yes, we’re going to take your AR-15, your AK-47. We’re not going to allow it to be used against a fellow American anymore,” he said.

O’Rourke also illustrated his complete ignorance of the AR-15 style weapon, claiming it was designed to be used on the battlefield. Moreover, he demonstrated an astonishing ignorance about ammunition and repeated a story he told earlier regarding an alleged encounter at a gun show in Conway, Arkansas.

Here’s a partial transcript as posted by Newsbusters’ Scott Whitlock:

DAVID MUIR: I’m going to work down the row here, I want to come to Congressman O’Rourke, because I know this is personal to you. El Paso is your hometown. Some of the stage have suggested a voluntary buy-back for guns in this country. You have gone further. You said, quote, “Americans who own AR-15s and AK-47s will have to sell them to the government, all of them. You know that critics call this confiscation. Are you proposing taking away their guns and how would this work?

BETO O’ROURKE: I am, if it’s a weapon that was designed to kill people on a battlefield. If the high impact, high velocity, when it hits your body, shreds everything inside of your body because it was designed to do that so you would bleed to death on a battlefield and not be able to get up and kill one of our soldiers. When we see that being used against children and in Odessa, I met the mother of a 15-year-old girl who was shot by an AR-15 and that mother watched her bleed to death over the course of an hour because so many other people were shot by that AR-15 in Odessa, there weren’t enough ambulances to get to them in time. Hell, yes, we’re going to take your AR-15, your AK-47. We’re not going to allow it to be used against a fellow American anymore.

O’ROURKE: And, I want to say this — I’m listening to the people of this country, the day after I proposed doing that, I went to a gun show in Conway, Arkansas. To meet with those who were selling AR-15s and those who were buying those weapons and you might be surprised, there was some common ground there. Folks who said, “I would give that up, cut it to pieces, I don’t need this weapon to hunt, to defend myself. It is a weapon of war.” So, let’s do the right thing, but let’s bring everyone in America into the conversation. Republicans, Democrats, gun owners and non-gun owners alike.

On a personal note, I’ve fired a number of weapons of all types over the years — everything from black powder muzzle-loading flintlock rifles to M-60 machine guns. Pretty much all of the weapons I’ve shot used ammunition that could do the type of damage O’Rourke spoke of if used on a human target. That’s just what bullets do.

Perhaps O’Rourke is giving us a brief glimpse into what he would really like to do regarding guns. After all, even a replica Brown Bess — the single-shot musket carried by the British Army during the Revolutionary War — can do a lot of damage if fired at a human being.

I’ve also spent some time in rural Arkansas, and I don’t think Beto truly understands the fiercely independent nature of regular Arkansans — even those who usually vote for Democrats. Something tells me he’s going to have a hard sell with those folks, along with all the millions of law-abiding gun owners across the country.

Here’s video of his comments:

It’s interesting to note that no one during the debate — including the moderators — even touched on the constitutionality of government-forced confiscation. Others, like Dana Loesch, did.

You’re going to use guns to go door to door and forcibly steal lawfully-owned property from law-abiding Americans? https://t.co/Dxy3v80W8R

She also wondered if he could pass the background check necessary for such a “sale” with his record.

Could you pass the background check to take possession of it with your DWI and burglary record? https://t.co/91klgnJOlF