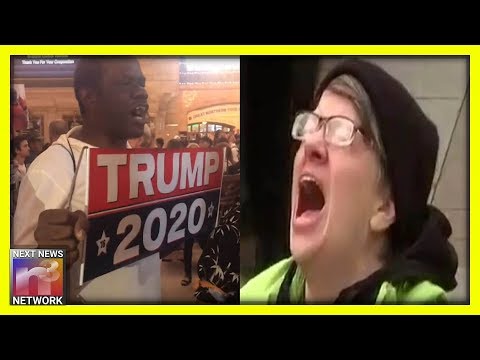 It is a common belief among this nation’s mentally-challenged libtard population that BLACK Trump supporters are racist toward their own people.

I guess you would call that self-hate?

I think that more aptly describes libtards, who can’t seem to function as decent human beings as long as Trump is in office.

What was their excuse before that?

If the shoe fits…

On Sunday a group of far left open borders leftists held a rally in Grand Central Station in New York City. The radical leftists were protesting against ICE and US Border Patrol with their NO RAIDS/CLOSE THE CAMPS/ABOLISH ICE banners.

Local Trump Supporters caught wind of the rally and held a counter protest.

Reporter Pamela Hall was there to cover the action at The Silent Majority No More.

One Trump 2020 supporter of color carried around a Trump 2020 sign and challenged the leftists.

This guy is amazing!

Once again, this might be an appropriate time to remind people of who the real (covert) racists are in this country:

It is important to look at policies with common sense.

Do the welfare state policies of the Democrats really help minorities excel and prosper?

Or do they keep them down, where the Democrats want them, and voting Democrat their entire lives?

Even Black Christian Pastors have become awakened to what’s really going on in America.

If Democrats really cared, they would be for policies to help people break free from poverty and excel financially.

This is not about caring for your constituents.

It is about enslaving them ALL OVER AGAIN.

The jig is up Dems, because people of color are starting to figure out your scam.