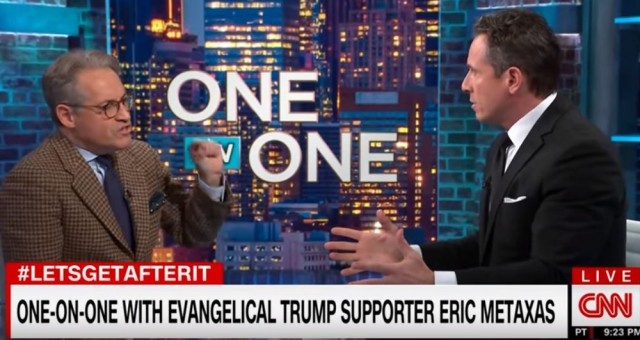 Is Cuomo kidding with his blatant hypocrisy?

(TNS) We can think of nothing more pointless for a conservative, Christian Trump supporter than taking the time out of his busy day to appear on CNN, for any reason.

But Christian author Eric Metaxas did and boy, what a waste of time he’ll never get back.

The premise of his interview with that monumental jerk, Chris Cuomo, was to discuss an editorial published in the magazine Christianity Today that argued in favor of impeachment President Donald Trump and removing him from office.

Cuomo’s “point” was that he finds it difficult to believe that any Christian could support Trump for any reason, because, again, the president’s not ‘moral’ or ‘decent’ or ‘upstanding’ or anything having anything to do with Christian values.

"Why get behind a man who makes a mockery of your faith?"

"Most people that I know do not think he makes a mockery of our faith."@ChrisCuomo gets into a heated exchange with @ericmetaxas, evangelical author and supporter of @realDonaldTrump.https://t.co/MhOQR8TRPD pic.twitter.com/yhEq8vMtRp

Is it any wonder why virtually no one in America watches this network, let alone this preening, posturing, blatant hypocrite?

First and foremost, many Christians support President Trump because they believe that he supports them and their faith — even if he himself isn’t a particularly religious person.

Secondly, they support him because he supports their First Amendment right to hold religious that do not comport with the Left’s support for every aberrant lifestyle and behavior imaginable. Cuomo’s Garbage Party seeks to force Christians and everyone else, by rule of law and under threat of punishment, to not only accept such behavior, but to support it financially.

Like, for instance, paying out $500 million per year in tax money to Planned Parenthood, the largest abortion mill on the planet. Note to Cuomo: Your Catholic Church isn’t a big supporter of abortion, but you nevertheless shill for and support politicians who do.

Hey Chris — how ‘moral’ and ‘decent’ is it to support a party that believes in killing babies right up and just beyond the moment they take their first breath? Do you do ludicrous much?

It’s pathetic watching Cuomo try to argue that Trump’s a reprobate when the politicians he supports are walking, talking, daily examples of what morality challenged people really look and act like.

No wonder nobody watches him or his network.