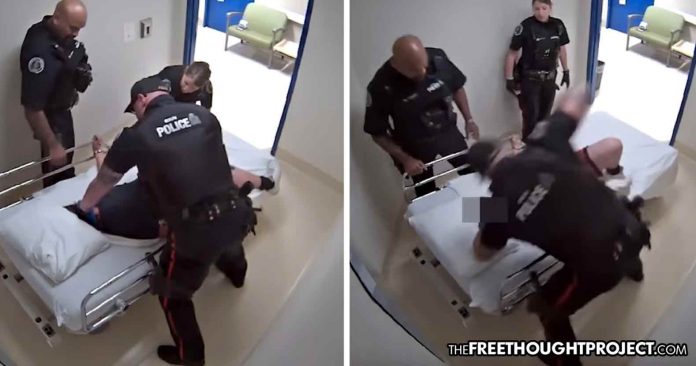 A veteran cop from the Guelph police department has been charged and convicted for his role in a savage beating caught on camera of a 17-year-old boy in a hospital — who was restrained to a bed. Failing to take responsibility for his actions, the officer blamed the incident on PTSD.

The incident happened in September of 2016 after the teen was admitted to Guelph General Hospital. The teen was apparently suicidal so he’d been restrained to a hospital bed and was taken to a safe room.

As the video shows, in spite of being chained to the bed, the teen was still flailing about, trying to cause himself harm. That’s when officer Corey McArthur snapped and threw a vicious elbow about the face and upper body of the teen.

The blow resulted in a massive gash below the defenseless teen’s eye which had to be treated with stitches by hospital staff.

After hospital staff investigated the cause of the teen’s injuries, they watched the surveillance footage and then notified police. None of McArthur’s fellow cops who witnessed the attack said a thing.

After the incident, McArthur and his defense team claimed that it was his PTSD that caused him to lose control and beat the restrained child in a hospital. However, the PTSD was completely undiagnosed and untreated prior to this incident.

Markson said that his client has PTSD stemming from the death of a fellow cop who died in a car crash.

As Guelph Today reports, often reading from medical reports, Markson said the PTSD led to McArthur becoming “increasingly irritable and aggressive in situations he felt a police officer was being attacked.”

“He acted too quickly and with too much force,” Markson admitted, but said it was an instinctive reaction by someone experiencing “hyper-vigilance” and “super awareness” caused by the PTSD.

According to the court, only after the incident did McArthur ever decide to seek treatment for his PTSD. The claims of PTSD may have been believable had this officer not had a history of violence and charges for assault, including a charge prior to the tragic loss of his coworker.

In total, McArthur has faced charges three times for assault. In 2010, he was found guilty of assault and given an unconditional discharge. However, he was rehired where he would strike again in 2014 and 2016.

Prosecutor Michael Carnegie had a different opinion about the incident which he called “cringe worthy.”

“The public expects that when an individual is placed in police custody, that, however difficult, that individual will be kept safe,” Carnegie said.

“The public will and ought to have a concern,” said Carnegie, who called the assault “beyond the pale.”

Now, as Guelph Today reports, McArthur is up for sentencing on Sept 27.

The prosecution is seeking a suspended sentence with probation, which would leave McArthur with a criminal record.

The defence is seeking a conditional discharge with probation, which, if McArthur stayed out of trouble for three years, would leave him with no criminal record.

If the prosecution gets their way, there is a good chance that McArthur could be back on the job again as a gypsy cop, attacking more handcuffed children. For the sake of public safety, let’s hope that doesn’t happen.