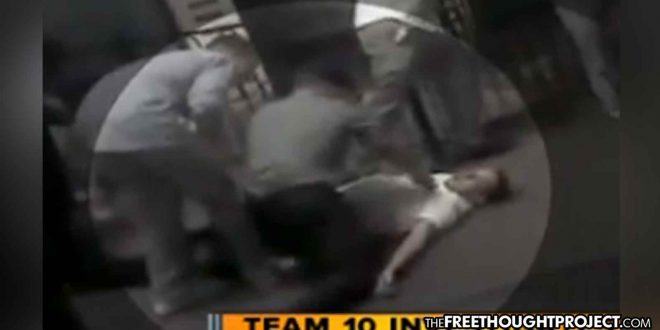 San Diego, Calif. – As TFTP originally reported, two active duty U.S. Marines were charged with felony assault and battery charges stemming from an altercation with San Diego police officers and faced the possibility of being dishonorably discharged from the service, as well as up to three years in prison for the false charges filed against them. Luckily, however, unlike the police officers, the body camera footage didn’t lie, and now, one of these former Marines is getting civil justice.

Although they were charged with assault and battery, video captured on an officer’s body camera indicates a different set of circumstance than the narrative put forth by the officers involved in the incident, and backs up claims made by the men and their attorneys.

This week, former Lance Corporal Robert Reginato was awarded $116,000 to settle the lawsuit against the San Diego police department.

The Marines claim and the video shows that they were simply being good Samaritans and rendering aid to an unknown victim that was lying unconscious on the ground when police attacked them.

They two men stated that they were out celebrating the return of a fellow Marine from Afghanistan when they witnessed a fight take place. One of the participants in the fight, who was unknown to either Marine, was knocked unconscious. Both men rushed to the side of the victim and attempted to render aid to the unconscious man on the ground.

The video then shows police rushing in and attempting to manhandle the two Marines as they are in the process of attempting to give aid to the unconscious man on the ground.

“While being held down on the ground, [Reginato] was repeatedly punched in the face by defendant Patrick Vinson, without necessity or justification,” reads the 2015 lawsuit.

After the incident, police attempted to paint Reginato, then 21, as an aggressor claiming in the police report that he, “forcibly grabbed an officer to free his friend from police. When an officer attempted to arrest him, he resisted. The only way he was taken into custody is after the sergeant punched him several times in the face.”

But the video clearly shows something else transpiring, as another officer on the scene can be heard clearly shouting, “Sarge! Sarge! Sarge! No punching Sarge!,” as if he clearly could tell the officer throwing the heavy-handed punches was going too far with his actions.

Paul Neuharth, Reginato’s attorney said, “What you’re seeing here appears to be assault and battery under color of authority and is definitely a violation of the civil rights of these Marines,” according to ABC 10 News.

Why should two Marines, acting to provide assistance to an unconscious man lying on the ground, be assaulted by police simply because the officers rush into an area without any idea as to what is going on, but fueled by fear and adrenaline?

Neuharth told reporters at the time, “You’ve got two Marines that will be kicked out of the Marine Corps as a result of this if convicted of those felonies, which started as giving First Aid to an unconscious person they never knew.”

These Marines were being exemplary citizens and should be applauded for their actions, but instead they were attacked by jackboot thugs operating under the color of law.

Because these Marines didn’t allow themselves to simply be manhandled by overly aggressive cops they were facing up to 3 years in prison, and for what? For taking the time to assist someone they didn’t even know.

Luckily, the system that set out to paint them as criminals failed miserably at their corruption. However, neither of the officers involved were ever held liable. One of them retired in 2016 and the other is still active on the force. Shameful, indeed.