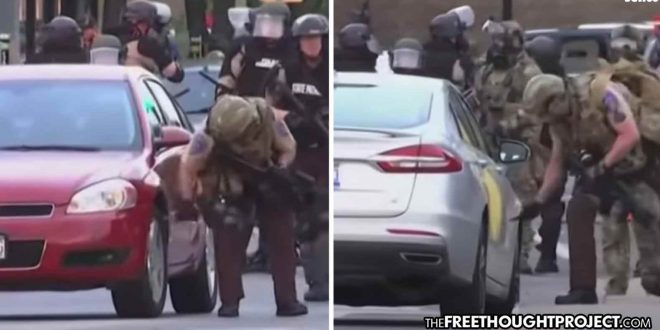 Minneapolis, MN — On Sunday, the majority of councils members on the Minneapolis City Council announced their plans to disband the entire police department and replace it with something more community oriented. The move comes after officers killed George Floyd and were not immediately held accountable and the multiple criminal acts Minneapolis cops have carried out since that day. As the following video below of cops slashing tires shows, cops in Minnesota have no problem giving the public reason after reason to fire them all.

Several videos have surfaced that appear to show cops in military-style uniforms slashing the tires of several cars. Mother Jones compiled the various videos and posted them in an article on Monday. Adding to the egregious nature of such an act of vandalism is the fact that many of the cars belonged to journalists covering the protests.

In the videos, officers are seen in a K-Mart parking lot and a highway overpass which were both used as parking areas for protesters during the beginning of the unrest. Mother Jones contacted the owner of the grey car in the video below, which was a rental belonging to Luke Mogelson, a New Yorker writer who typically covers war zones and is now stationed in Minneapolis to write about the protests.

As Mother Jones reports, one officer took a picture of his press pass and said he would “radio it up the chain so everyone knew that car belonged to the press,” said Mogelson. When he came back later that evening to retrieve his car, officers informed him that the tires were punctured. “They were laughing,” Mogelson recalled. “They had grins on their faces.”

Mogelson was not alone in his strife. Multiple members of the press returned to their cars only to find that their tires had been slashed as well.

Minneapolis Police slashed every tire on my rental car, as well as every tire of every car in this parking lot. pic.twitter.com/lchFplYQ0n

Radio-Canada journalists covering the protests in Minneapolis had their tires slashed. Witnesses told them police did it. https://t.co/9YwfcClMoq

Cops in Minneapolis shot my friend, the photographer @philip_nyc, in the chest, with a rubber bullet, causing bruising over his heart. They also slashed his tires.

Turns out it wasn’t just journalists the cops were targeting either. A tow truck driver in the area said they received a record amount of calls from folks who had their tires slashed. When asked by the press whose cars were being towed, the tow truck driver said, “Everybody. Medics over there. News crews. Random people that were just here to protest and—tires slashed.”

When Mother Jones published their article on Monday, police refused to elaborate on why or who would do such a thing. However, the Star Tribune finally received a response that is utterly laughable. Police claimed the parked cars, belonging mostly to journalists and medics, had their tires slashed because they were suspected of driving into crowds — while parked in parking lots. As the Tribune reports:

“State Patrol troopers strategically deflated tires … in order to stop behaviors such as vehicles driving dangerously and at high speeds in and around protesters and law enforcement,” Department of Public Safety spokesman Bruce Gordon said.

Gordon said the patrol also targeted vehicles “that contained items used to cause harm during violent protests” such as rocks, concrete and sticks.

“While not a typical tactic, vehicles were being used as dangerous weapons and inhibited our ability to clear areas and keep areas safe where violent protests were occurring,” he said. As in all operations of this size, there will be a review about how these decisions were made.”

Knotz said the deputies got their directions from the state-led Multiagency Command Center [MACC], which was coordinating law enforcement during the protests connected to the death on May 25 of George Floyd.

Towing the vehicles was not an option, Knotz said, because “you could not get any tow trucks in there” because of the mass of people in the area.

Star Tribune likely had a hard time swallowing this excuse given the fact that one of their reporters, Chris Serres, who was covering the protests the night of May 30, was one of the victims of police tire slashing.

Not only is this an unprecedented act of vandalism by police, but they had no evidence an actual crime was being committed before destroying the property of innocent people. They appeared to be targeting the vehicles of journalists as well.

Imagine the victim card police would pull if a multiple vehicles belonging to officers had their tires slashed. It would be across multiple news outlets with angry police union leaders claiming their is a war on cops. However, when cops target cars belonging to journalists and medics, we are told they are doing so for our safety. Thank you Minnesota law enforcement for keeping everyone safe by slashing the tires of those who would show the world your crimes.

Courtesy of TFTP
Matt Agorist is an honorably discharged veteran of the USMC and former intelligence operator directly tasked by the NSA. This prior experience gives him unique insight into the world of government corruption and the American police state. Agorist has been an independent journalist for over a decade and has been featured on mainstream networks around the world. Agorist is also the Editor at Large at the Free Thought Project. Follow @MattAgorist on Twitter, Steemit, and now on Minds.