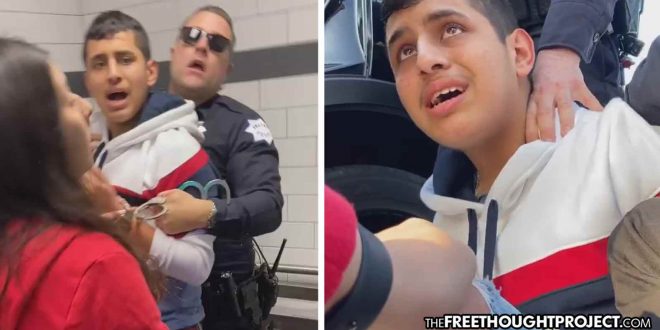 Fresno, CA — All too often, families in need of medical help for their family members in a crisis will call 911 and receive anything but help. All too often, police—who have zero training in dealing with the mentally or physically ill—will show up to these medical calls for help and abuse, assault, arrest, and sometimes even kill those in need of help. A California woman learned this the hard way over the weekend when she called for an ambulance, got police instead, and watched her child endure a horrifying fate at the hands of Fresno’s finest.

Lourdes Ponce and her 16-year-old son with autism had gone to the doctor last week after he had a seizure. After the doctor, the pair were enjoying an early dinner at El Pollo Loco with Ponce’s other child when her son went to the bathroom and didn’t return for a long time. Ponce said she tried to get into the bathroom to help her son David, but the door was locked.

“I stood outside the door, I heard him hit the floor, I tried to open the door but it was locked, that’s when I asked for help,” she says.

Ponce said that when employees unlocked the door to the bathroom, her son was on the floor having a seizure, so she called an ambulance. Sadly, however, cops showed up instead of paramedics.

“We called paramedics for help, we did not call police. He was not hurting anybody, he was having a seizure,” she says.

However, according to Ponce, police mistook David’s seizure for drug use and began attacking him. As is the case when people have seizures, when they come to, they are often in an excited state or delirium. They are incredibly vulnerable at this point and need to be calmed. But calming David was the last thing on the responding officers’ minds.

“Suddenly a Caucasian police officer came in pushing my daughter and me and slammed my son David Against the wall and started hitting him. The officer didn’t bother to ask what was going on and thought he (David) was on drugs. When we yelled at him and told him that he had epilepsy and autism, the officer instead of helping him, hit him and put my son in handcuffs,” Ponce wrote in a heated Facebook post.

When your only tool is a hammer, everything begins to look like a nail—even autistic children in medical distress. When police showed up, instead of helping the suffering child, they started to hammer him. Instead of getting the boy to a hospital, they started attacking him, forcing him into handcuffs, and tried to shove him into the back of the patrol car.

Anyone who knows anyone with autism knows that brute force and violent touching are extreme triggers for an emotional response. The actions by the Fresno officers were so over the top that it caused David intense panic and he started to vomit. He can be seen crying in the video begging cops to take off the handcuffs.

“He has autism, he has epilepsy, stop it!” she can be heard screaming in the disturbing video of the attack.

“He saw that my son was throwing up and instead of helping him so that he wouldn’t choke on his vomit, they had him on the ground in handcuffs,” she says.

As cops continued to try to kidnap her son, Ponce ran to her car to grab the paperwork from the doctor’s visit, showing cops that David has a history of epilepsy. Only after official paperwork showed their victim was an epileptic autistic child and not some hardened criminal drug user did the officers finally allow the boy to get medical care.

“After I showed the paperwork, EMS was able to treat him and take him to the hospital,” she says.

According toe ABC 30, Ponce says her son is still recovering from his epileptic attacks at Valley Children’s Hospital, and that he is so traumatized by what happened to him that he is having a hard time receiving treatment from hospital staff.

While at the hospital police officers paid Ponce a visit and gave her a “certificate of release” form – paperwork that states the teen will not be arrested.

Had the cops not shown up at all at the restaurant that day, this poor autistic child would’ve been far better off.

After video of the incident began to go viral, the Fresno police department was forced to respond, saying, “This case is currently under Administrative Review. The review will include the examination of all the information pertaining to the officer’s contact including Body Worn Cameras.”

Ponce told ABC 30 that she hopes this incident serves to illustrate how completely ignorant police are when dealing with people having medical emergencies. Indeed, as you watch the video below, remember that police claim they are helping the child who they are assaulting and attempting to kidnap for having a seizure.