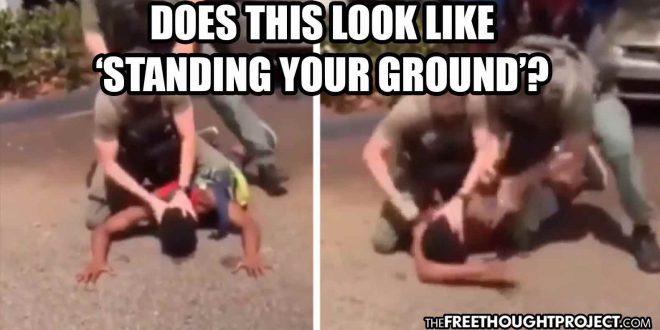 Tamarac, FL — Three deputies from the Broward County Sheriff’s office were all charged last year after they smashed an innocent teen’s face into the ground, leaving a pool of blood, and lying about it. The entire gruesome incident was captured on video. Now, the violent cops who viciously attacked the innocent teen, Delucca Rolle then-15, are telling the court they were standing their ground and should not face a misdemeanor battery trial.

Predictably, attorneys for the charged cops are claiming the video showing them smash the innocent teen’s face into the ground ‘doesn’t tell the whole story.’

According to the Sun-Sentinel, in motions filed this week, defense lawyers Eric Schwartzreich and Jeremy Kroll said their clients were charged for political reasons, and they sought to portray the videos in a context that validated their clients’ actions.

“Up to this point, the public has been provided with a snapshot of what happened that day,” said Kroll, Krickovich’s lawyer. “There’s a motion picture, a movie that tells more of the story.”

Scwartzreich, who was hired by the BSO Deputies Association to represent LaCerra, described the area the teens were located that day as a “fight club” wear teens would meet to fight after school. Many readers of TFTP likely remember places like this when they went to high school wear teens met to settle disputes without geting in trouble at school. Nevertheless, Scwartzreich used this description of the location to smear the victim.

“This wasn’t a situation where students were having church services in the parking lot,” Schwartzreich said, conveniently failing to mention the part about the officers lying to cover it up.

After the assault was caught on video, Sheriff Gregory Tony immediately suspended deputies Gregory LaCerra, Christopher Krickovich and Ralph Mackey without pay. They were hit with misdemeanor charges for battery and falsifying police reports, according to the Broward State Attorney’s Office. A third deputy was also charged with “falsifying the circumstances of the juvenile’s arrest,” state prosecutors said.

“Good officers are going to think this is a good thing,” the Rolle family lawyer, Sue-Ann Robinson, said at the time.

“It’s too premature for us to say justice has been served,” she said predicting the reaction from the officers’ attorneys this week. “The charges have been filed, which is a step in the right direction, and it shows that the officers are going to be held accountable for their actions, and we hope that eventually it leads to a successful prosecution.”

As TFTP reported at the time, according to witnesses, a crowd of students formed outside the McDonald’s after school that day to watch what they thought was going to be a fight between two students — something that takes place in towns across the country. However, there was no fight and the only ones initiating violence appeared to be the cops.

According to witnesses, police showed up at the McDonald’s and yelled at the students to disperse. Those who did not disperse fast enough were then pepper sprayed. The video shows multiple teens hit with spray.

The witnesses told NBC 6 that when police first grabbed one teen to handcuff him, his friend approached the deputies to ask why he was being arrested and merely grabbed his friend’s phone. That teen was Rolle who was then doused in the face with pepper spray and thrown to the ground.

As the video shows, Rolle was not initiating any violence toward the officers and was merely attempting to rub his eyes and possibly cover his head from the punches being doled out by the deputy.

According to the officers’ attorneys however, Rolle, “tensed his body up and stepped toward Sgt. LaCerra in an aggressive manner while uttering profanities,” so he deserved to have the hell beat out of him.

“No use of force is pretty,” Schwartzreich said Wednesday. “But it was justified and it was legal.”

But this was not legal. As the teen lies face first on the ground, one deputy holds him down while another punches him. After a couple of punches, the deputy then grabs the teen’s head and repeatedly smashes his face into the asphalt.

One of the videos shows the savage assault on Rolle while another shows him sitting on the ground in handcuffs with blood pouring down his face.

“The next thing you know, his head started bleeding and everything, and while he was getting handcuffed, lil bro got punched in the face by police,” one student told NBC 6 at the time..

After the incident, Rolle was rushed to the hospital to be treated for his injuries.

“It was outrageous that a deputy would do this to an unarmed student who was not fighting back, who was giving no resistance,” Broward County Mayor Mark Bogen said.

“It is about time the three officers face the consequences of their actions,” prominent police brutality attorney, Benjamin Crump said after the cops were originally charged. “Wearing a badge is not a license to hurt children and then lie about it.”

Below is the full video taken by one of the students, at the end you can see Rolle in handcuffs, sitting on the ground with blood pouring from his face. This kid’s only crime appeared to be questioning a cop. A disturbing notion indeed.