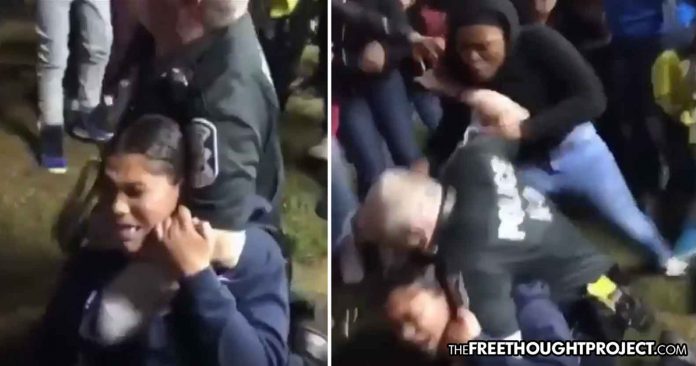 Montgomery County, PA — Shocking cellphone video from a county fair in Pennsylvania captured the moment multiple teenagers attacked police officers in an apparent attempt to stop one of them from choking a teenage girl. Many of those who watched the video are saying that it shows what happens when youths lose trust in police.

According to the Norristown Police Department, officers were responding to reports of a fight at the the St. Francis Spring Carnival in Norristown.

“The crowd ignored all orders by the police and continued to fight. Officers reported being kicked, shoved, and punched and were forced to call for assistance from several surrounding departments,” Norristown Chief of Police Mark Talbot said.

However, as the video shows, one of the officers appeared to be choking a child who was a third of his size. This choke hold appeared to anger the crowd of children who then swarmed the officer to get him to stop.

According to NBC Philadelphia, the incident unfolded as follows:

ONE VIDEO SHOWS THAT AS ONE OFFICER PINS TO THE GROUND THE GIRL WHO THEY WERE INITIALLY TRYING TO DETAIN, A SECOND OFFICER TRIES TO KEEP THE CROWD AWAY. THE SECOND OFFICER THEN GOES TO ASSIST HIS PARTNER, WHICH IS WHEN SOME OF THE TEENS GET CLOSER, ONE GIRL REACHING BETWEEN THE GIRL ON THE GROUND AND THE OFFICERS.

THE SECOND OFFICER THEN SHOVES THE GIRL AWAY AND GETS UP, APPARENTLY TRYING TO DETAIN HER. VARIOUS TEENS THEN SWARM HIM AS TWO OTHER GIRLS TURN THEIR ATTENTION TO THE GIRL AND THE OFFICER STILL ON THE GROUND.

THE GIRLS STAND INCHES AWAY FROM THE OFFICER, WHO IS NOW USING HIS LEFT ARM TO HOLD ON TO THE GROUNDED GIRL BY THE THROAT, AND REPEATEDLY SHOUT AT HIM AS HE MOTIONS FOR THEM TO GET BACK.

After the officer punched the girl in the face, all hell breaks loose when the girl then punches the officer back. At this point, multiple youths then pile on top of the officer before a backup officer arrives and pulls out pepper spray, dispersing the crowd.

“A full and thorough investigation is being conducted. We are committed to uncovering all of the relevant facts and will proceed in a transparent and impartial fashion,” the chief added.

During a press conference last Sunday, the chief addressed concerns from citizens who called this an act of abuse by police.

“This is not a racist police department,” Talbot said. “This wasn’t an act of terror by police. These officers were overcoming a significant amount of resistance.”

However, according to the mother of the girl seen in the video getting choked by the officer, police mistook her for someone partaking in the fight and she was attacked for no reason.

“I was saying, ‘I can’t breathe. Can you please let me go?’ It was pressing right on my neck. I couldn’t breathe at all. It was terrible,” the girl told NBC10.

After the video was posted to social media, students from nearby Stewart Middle School walked out of class to protest the incident.

“I’m helping them to understand it was two,” Yvette Madden, one of the students, told NBC10. “It was both parties. They made some wrongs. The officers made some wrongs as well.”

We agree with Madden. There is no doubt that these officers were in a very stressful situation but choking out a small girl — whose mom says wasn’t even involved in the fight — was probably not the best way to calm the scene. Also, attacking the police officers was likely not the best choice by the children either as we’ve seen police officers in situations like this one cause serious damage.

The Free Thought Project never condones the use of violence outside self-defense. However, as today’s children — especially minorities and the poor — grow up watching police officers kill unarmed and often innocent men, women, and children, with impunity, this backlash is to be expected.