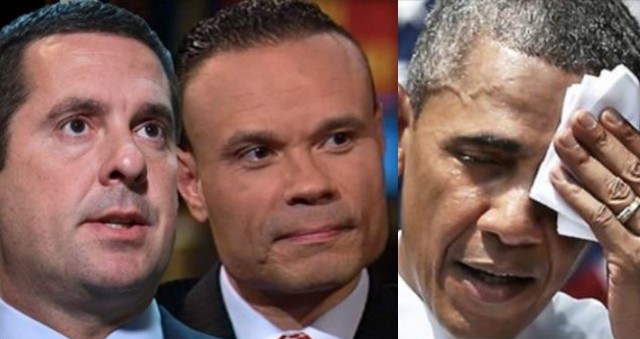 Dan Bongino, whose book ‘Spygate’ was among the first to layout the illicit spy scheme, is as well versed in the events that led up to Nunes’ discovery that the Obama administration had weaponized the intelligence community against American citizens.

As a member of the Gang of Eight, Nunes was briefed on matters of national security.

It was Nunes who realized that the drivel he was being fed by Obama’s CIA chief, John Brennan and FBI Director James Comey didn’t square with each other.

Nunes briefed President Trump about both the surveillance and unmasking that was taking in mid to late March 2017.

The release of the IG Report earlier this month has proven everything Nunes alleged is true.

The report also exposed the then-ranking member of the House Intelligence Committee, who saw all of the same evidence, as a bald-faced liar.

That ranking member was Adam Schiff.

Rep. Nunes gives credit to Mr. Bongino’s audience for sharing their findings on various social media platforms that helped them focus their investigation in areas they hadn’t themselves contemplated.

“There was a whole lot of spying going on”