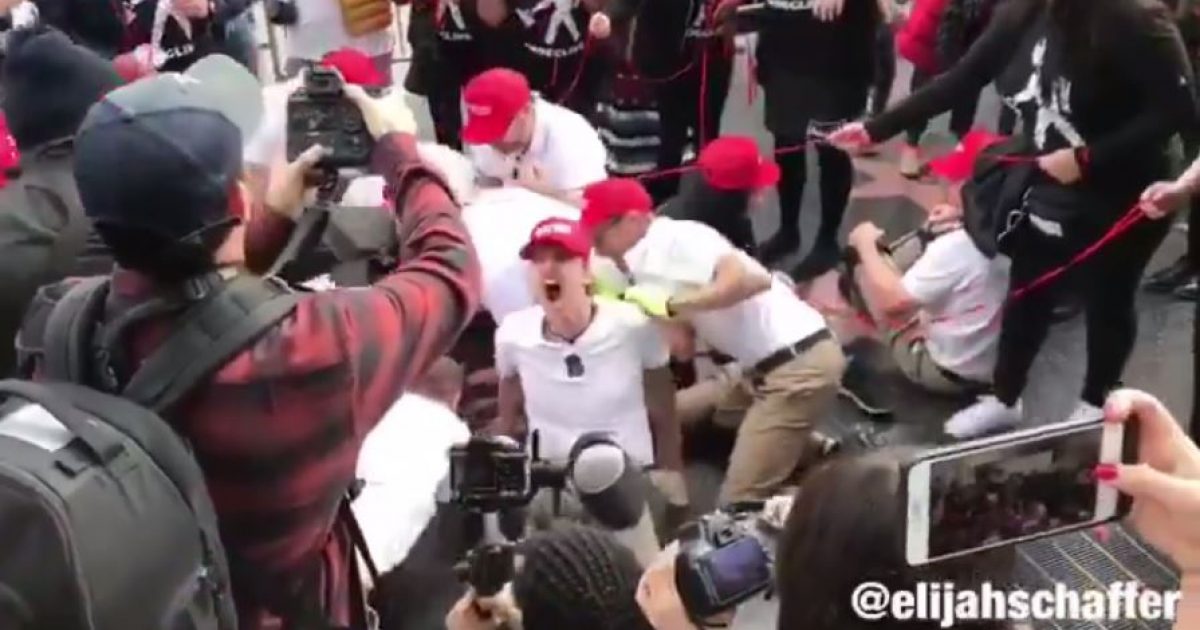 All of the barking creatures were wearing dog leashes and were led around by what were presumed to be people of color and/or LGBT supporters.

Hoft posted a YouTube video but the video is no longer available. No surprise there.

Another video — perhaps the same one — was posted to Twitter:

And they say the ones who voted for Trump are crazy. pic.twitter.com/MRWjZKwPwh

Hoft also said there was a casting call for the performers, which read:

To submit for a role in this project, please RSVP and DM us asap and tell us a little about yourself, as spots are expected to fill up fast. Tag your friends!!!”

According to a press release from the activist group Indecline, over two-dozen “men and women of color and members of the LGBT community” placed leashes and custom made dog collars on white men in red M.A.G.A. hats and walked them on all fours up and down Hollywood Boulevard on Sunday.

According to Fairbanks, the entire sordid episode was “based on Cardi B’s recent Twitter battle with Tomi Lahren, in which the crass rapper told the right-wing pundit, ‘Leave me alone, or I’ll dog walk you.’”

“The project, entitled ‘Hate Breed’, speaks to race relations in America, specifically the patience exhibited by those most affected by racism and bigotry and their willingness, despite having the greatest right to anger, to walk their attackers down a path to empathy,” Indecline said.

In addition to the hats, Fairbanks said, the leashed men “wore dog collars with tags that each had the name of a ‘racist white man.’”

One picture posted by Fairbanks showed a young girl petting one of the men like a real dog.

It’s also important to remember this comes as physical assaults on Trump supporters are increasing nationwide.

Remember, this IS the modern Democrat Party. Remember that the next time there’s an election in your area. And remember that if these deranged leftists could, they would do this to you for REAL.