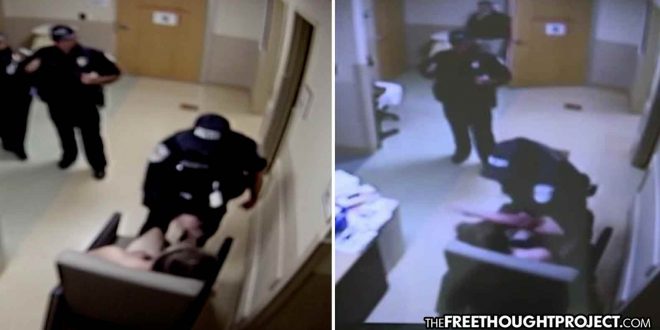 Fort Pierce, FL — Officer Albert Eckrode — like so many other cops do to avoid accountability — resigned after he was caught on a hospital’s surveillance video bullying and beating a patient. For nearly four months, this move seemed to have worked in his favor. However, given the current climate in the country and police departments getting called out for failing to hold bad cops accountable, officials finally charged this violent cop with assault.

Police departments across the country have been put on blast by citizens in the last two weeks for failing to hold their officers accountable for their crimes. Now, some departments appear to be scrambling to tie up loose ends by going after cops they previously let slide. Officer Eckrode, from the Fort Pierce Police Department, is one of those cops.

Eckrode, a K9 handler with the department, was captured on video on February 20 of this year violently abusing a troubled man at a hospital. According to the Florida Department of Law Enforcement (FDLE), Police Chief Diane Hobley-Burney said police officers and crews with St. Lucie County Fire Rescue found the man unconscious and intoxicated on Okeechobee Road.

When they brought the man to the hospital, he reportedly yelled at the officers but never once became physically combative. In fact, he was so non-threatening that police never put him in handcuffs.

Nevertheless, the yelling apparently caused Eckrode to lose it and as the video shows, he walks over to the man who is seated in a recliner and begins his assault. Eckrode starts his assault by kicking the chair in which the man is seated before he starts repeatedly slapping him.

The slapping then turns into punching as Eckrode escalates the violence. The man, who is shirtless and shoeless, never lifts a finger to provoke the punches, much less defend himself. After receiving multiple punches to the face, the man slumps over in the chair as Eckrode gets in his face, seemingly rubbing it in that he can abuse him with no accountability.

Officer Monica Frederic, 27, a one-year employee of the department stands in the background and does nothing to stop the abuse. Both officers then lied on their statements and covered up the beating. Had this video not existed, they would both still be cops.

At a press conference announcing the charges against the officer, chief Hobley-Burney noted that this was not a use of force investigation, it was a criminal one.

“So that it is clear, this was not a use-of-force action by Eckrode, it was a criminal act that will not be tolerated,” Hobley-Burney said. “By no means are the actions of Eckrode and Frederic reflective of the officers of the Fort Pierce Police Department.

“It saddens me that they have tarnished our badge and the trust our citizens have in us,” she said. “We must hold ourselves accountable for our actions and reassure our residents and visitors that they will be treated professionally and with respect, regardless of the situation.”

The chief said the FDLE determined Eckrode broke the law. Police arrested him on felony charges of battery and official misconduct, and a misdemeanor charge of writing a false report to a law enforcement officer of an alleged crime, according to jail records. He posted bond on Thursday night.

Officer Monica Frederic faces a charge of filing a false report of the commission of a crime. Frederic, 27, has been on unpaid leave since March. She also faces a termination hearing.

Below is a video proving that cops will beat helpless individuals and then conspire to cover it up. Hopefully, this move to charge the officers is the beginning of a trend of accountability and not an act of virtue signalling to temporarily appease the masses. Only time will tell.