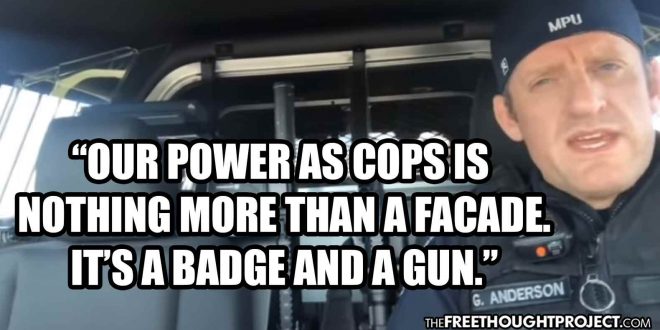 A video of a cop uploaded to social media this week has been making the rounds for all the right reasons. Officer G. Anderson made the brave decision to call out his fellow boys in blue for violating the rights of citizens by enforcing draconian lockdown measures in their states.

As TFTP has reported over the last two months, the police state in the land of the free is reaching critical mass. The Free Thought Project has reported on multiple videos of police officers violently attacking people for doing nothing other than standing too close to each other. We have seen people get arrested for painting fingernails, cutting hair, trying to keep open their essential businesses, and more.

A large portion of police in the land of the free, it seems, have taken this new authority to be able to crack skulls for arbitrary violations and ran with it. Luckily, there are still cops like Officer Anderson who say they will not do this and urge their fellow cops to do the same.

“Every time I turn on the TV I see people getting cited for going to church, for travelling on the roadways, for going surfing, opening their businesses, going to the park with their families, or doing nails out of their own house,” Anderson laments.

Anderson then reads a portion of the Bill of Rights before going off on his fellow cops.

“Stopping people and asking for their papers?” Anderson asks. “What is this, 1930’s Germany? Are you the Gestapo? You don’t get to stop people unless you have reasonable suspicion or probable cause that they have committed a crime.”

“Our power as law enforcement officers is nothing more than a facade,” Anderson says in one of the most telling admission we’ve ever heard from a cop. “It’s a badge and a gun.”

Anderson then makes an ominous prediction of what he thinks will happen if cops continue to stomp on the rights of Americans. Anderson says if the tyrant cops do not stop enforcing such arbitrary dictates from their overlords, cops will be “stripped” of their authority “in a heartbeat.”

He then goes on to predict a potential civil war.

“I am afraid that with these actions……you are going to wake a sleeping giant,” he said. “They are going to be put in a position where they won’t have their rights trampled anymore…..I think what is going to happen if this continues is we’re gonna see bloodshed in the streets.”

Anderson, who says he was special forces in Iraq, then implores his fellow cops to wake up to the tyranny they are forcing on the land of the free — before it is too late.

“You need to ask yourself one question, and that is, ‘am I doing the right thing?’”

We agree. Seriously asking the above question and scrutinizing your very existence as a law enforcing order follower is one of the best ways to end up on the right side of history.

Below is that video.

While everything officer Anderson says in the video above is certainly heartening to hear, we would not be the Free Thought Project if we didn’t point out the contradictions in logic.

While officer Anderson pleading with his fellow cops verbally to stop breaking the law and violating the rights of citizens is certainly worthy of merit, they are just words. Through these words, Anderson admitted to watching fellow law enforcement officers breaking the law — which he says could kick off a civil war — and he has taken no action to arrest or otherwise criminally charge or stop those officers.

What’s more, we would also wager that officer Anderson has used those two long guns behind him in the video, one of which is equipped with a silencer, to enforce the highly unconstitutional and immoral war on drugs. He’s also likely pulled people over and extorted them for victimless crimes like driving without a seat belt or having dark window tint, or having a license plate light out.

So, while we certainly think officer Anderson deserves to be commended for his words above, we would like to implore him to take peaceful action and refuse to enforce unconstitutional laws — even after the coronavirus pandemic is over, and it is magically okay to do so again.