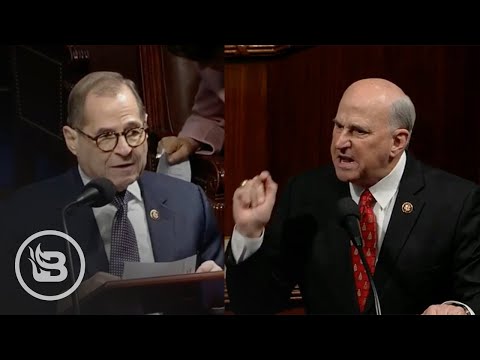 During the sham impeachment debate on Wednesday, Rep. Louis Gohmert, R-Texas, unleashed fire on coup leader Jerrold Nadler after the New York Democrat accused him of spreading Russian propaganda on the floor of the House.

Rep. Louie Gohmert, R-Texas, let loose on Democrats during Wednesday’s historic debate on the articles of impeachment against President Trump – shouting at House Judiciary Committee Chairman Jerry Nadler, D-N.Y., after he apparently accused the Republican of delivering “Russian propaganda” on the House floor.

Nadler’s comment set Gohmert off; he could be seen returning to the dais to shout down Nadler for his comment. The microphone on the Republican side was turned off at the moment when Gohmert approached, but he could be heard telling Nadler to take down his comment before the House returned to order.

Of course, the talking point from the left is that anything Democrats and their media allies (masters?) disagree with is “Russian propaganda.”

Judging from the tweets posted over at Twitchy, it seems Gohmert hit a home run.

We need to see more of this from the GOP…