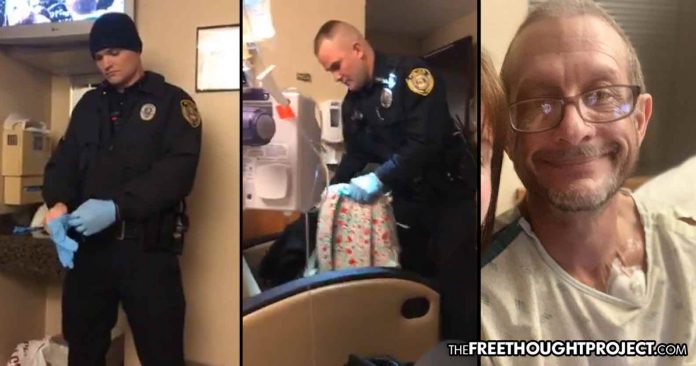 Bolivar, MO — In December of last year, medical marijuana was officially legalized in Missouri—sort of. The legislation, titled Amendment 2, would establish 192 medical marijuana dispensaries by 2020. Those who need that medical marijuana now—like cancer patients, epileptics, glaucoma patients, those suffering from PTSD, and others—will still be prosecuted by police if they try to get it. As the following incident shows, police will even raid cancer patients in the hospital for using it.

Nolan’s Tribe of Warriors Against Cancer is a Facebook page setup to follow the life of Nolan, who was diagnosed with pancreatic cancer last year. The page contains the following description of how the last year has played out for Nolan and his family:

Memorial Day 2018, Nolan was admitted to the hospital for jaundice and a blockage. 4 days in the hospital and no clear answers, a week later Nolan went to see an oncologist who broke the news of cancer to him for the first time. The journey began, many testing, many doctors, and none of them telling us what we wanted to hear. The prognosis was bleak, but Nolan was determined to keep fighting.

His journey led him to Boliver, Mo with Dr Leo Shunyakov. Dr. Leo gave Nolan hope and reason to believe he could win this fight.

During his uphill battle against cancer, Nolan began to substitute opioids with THC capsules as they are far safer. However, despite the fact that Missouri recently passed a medical marijuana bill, cops are still more than willing to go after those who’d dare to attempt to save their lives with this plant—so they raided Nolan’s hospital room—as he filmed the interaction.

As several Bolivar police officers were raiding his room, rummaging through the family’s private property in search of a plant that was technically legalized in December, Nolan tells the officers how it was passed and that the state just has to finish all the paperwork to make it entirely legal. Being that Nolan has pancreatic cancer right now, he can’t wait for the slow moving rusty cogs of the state to turn before he can use it.

As one cop stands there, acting like he’s some hero for raiding the hospital room of a cancer patient, Nolan asks him what he would do if he had cancer.

He’s then interrupted by the officer, who tells him, “okay, well, it is still illegal.”

“Tell me what you’d do,” Nolan says, asking the officer to step into his shoes for a second.

“I’m not in that situation, so I’m not gonna play these ‘what if’ games,” the officer replies.

“You wouldn’t do anything to save your life?” asks Nolan.

“Marijuana is saving your life?” the cop replies in a sarcastic tone.

Nolan’s family then tells him to calm down, but he refuses and tells the cops that the THC capsules he takes are in place of the dangerous opioids he was prescribed and his doctors know all about it.

The infuriating irony about this raid on a hospital room is the fact that had Nolan been taking opioids—that kill 150 Americans every single day—instead of THC, that’s killed no one ever, the cops would’ve been just fine with it.

As the infuriating situation continues to unfold, a doctor walks in who then begins to question the cops herself. She asks them if they have probable cause to be searching her patient and they claim they do because they “smelled marijuana.”

Nolan explains that it would be impossible for them to smell it as he does not smoke it and only takes the oil in capsules.

Eventually, the officers search every bag in the room and find nothing. They then turn their attention to a bag that Nolan has in his hospital bed. Nolan refuses to allow them to search the bag and tells them to issue him a citation instead.

The video then ends before we see what happens. We do know that Nolan was not arrested as he put out an hour long video explaining his position the next night. Luckily, the only thing cops seemed to ruin for this terminally ill cancer patient, was a good night’s sleep.

As you watch the following video, notice how many times the term “just doing their jobs” is thrown around. These cops didn’t want to be there, but they have been conditioned to enforce the law no matter how immoral that law is. Therein lies the problem with the American drug war.

If ever there was a video showing you this disgusting and horrific nature of enforcing the war on drugs, it is the video below.