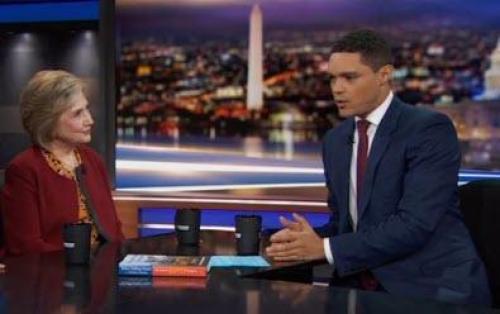 In a pitiful attempt to debunk alleged “conspiracy theorists,” the oh-so-unlike Jon Stewart replacement on The Daily Show, Trevor Noah, bombed big time when he invited Hillary and Chelsea on his show and asked, “How did you kill Jeffrey Epstein?”

Of course, there was laughter from the audience, but thinking people would immediately see past his shallowness that he went on to portray.

“I have to ask you a question that has been plaguing me for a while: How did you kill Jeffrey Epstein?” asked Noah.

“Because you’re not in power, but you have all the power,” he jested. “I really need to understand how you do what you do, because you seem to be behind everything nefarious, and yet you do not use it to become president.”

Actually, that is still up for debate, Trevor. The Seth Rich murder has yet to be solved. I know, I know, people like the police and Newsguard claim it was a robbery gone bad, but they haven’t caught the robbers have they? They haven’t caught those that killed Rich, have they? Nope. So, that is basically an unproven “conspiracy theory” by the same police department that shot down a woman in cold blood in DC several years ago too.

“Honestly, what does it feel like being the boogeyman to the right?” Noah asked.

Mrs. Clinton responded by saying, “Well, it’s a constant surprise to me. Because the things they say, and now, of course, it’s on steroids with being online, are so ridiculous, beyond any imagination that I could have. And yet they are so persistent in putting forth these crazy ideas and theories. Honestly, I don’t know what I ever did to get them so upset.”

You don’t recall your husband being on the Lolita Express and all his indiscretions over the years? Really, Hillary?

You don’t remember those men you left for dead, including our ambassador, in Benghazi while you and the usurper slept and then hatched a lie to deceive the American people? Really, Hillary?

You don’t recall the lies and deceit your department and the usurper gave to the families of Extortion 17 when American special forces were blown out of the sky due to the big mouths of Joe Biden and Leon Panetta?

And the deafening silence we heard from Washington over that event?

Of course, there was evidence that Epstein was murdered and didn’t commit suicide.

But hey, she needed to move on and attack the guy that beat her for the White House.

“I don’t think his real philosophy is America First, I think it’s Trump First,” she pontificated, adding that Trump “clearly does Putin’s bidding.”

No ma’am. That was you and the usurper, and we’ve demonstrated that over and over.

Here’s The Show. The Question About Epstein Comes Around The 6:09 Mark.

The Daily Show with Trevor Noah

By the way, she certainly is acting like she wants to be a dark horse in 2020, isn’t she?