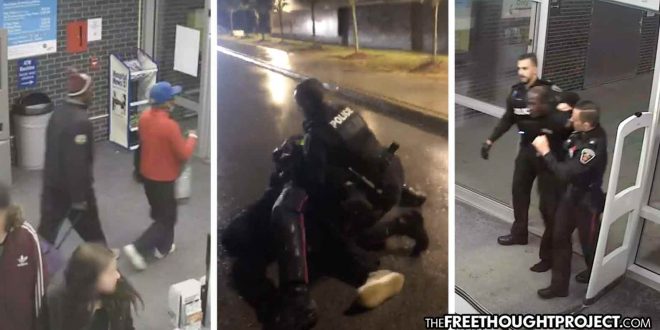 An utterly horrifying video made its way across the internet this week showing a young man walking down the street before attacking an innocent elderly woman. The 92-year-old woman was knocked off her feet and hit her head on a fire hydrant as the criminal who shoved her kept on walking. Her attacker does not rob her and simply keeps walking, adding to the malicious nature of his assault. The world was outraged at the injustice and rightfully so.

Days later, 31-year-old Rashid Brimmage was caught and arrested. He had reportedly been arrested 101 times before. For attacking this woman, Brimmage deserves to be in jail — and for now, he is. His victim was helpless, innocent, and did nothing to provoke this serial criminal.

Imagine the childhood this person had to grow up thinking it is acceptable to attack elderly women walking down the sidewalk. We are doing it fucking wrong America.https://t.co/4se7h5IziL

Like the 92-year-old woman shoved by Brimmage in the video above, Livingston and Pamelia Jeffers were both innocent, walking down the street, and harming no one when they were both savagely attacked in a similar fashion. However, because their attackers wear a badge and a gun, their story gets almost no coverage and is swept under the rug.

In 2018, Livingston brought his wife Pamelia Jeffers to the hospital because she wasn’t feeling good, complaining of insomnia. After spending some time in the hospital, according to their attorney, they told the doctor that Pamelia felt better, and asked if they could return the next day to follow up. According to the court documents, from a lawsuit filed this month, they were told by the doctor that they could leave.

They packed up Pamelia’s suitcase and then walked out the door. That’s when all hell broke loose.

The couple, who were both in their late 60s at the time of the attack, called their grandson to pick them up and were walking to his car when they were attacked.

As the couple exited the hospital, a nurse tried to get them to stop and return back inside. Security personnel also arrived. Then, two Durham regional police constables who were nearby, Alex Edwards and Iyan Dusko, intervened at around 10:45 p.m, the documents say.

The encounter can be seen on hospital surveillance footage, a cellphone video taken by a witness, and is described in the police investigation report and legal documents.

Unlike the simple shove that the criminal in the above video doled out, Livingston was punched so many times by the cops who threw him to the ground that he went unconscious, according to the police report.

“By this time, the couple had sustained significant bruising and lacerations but were forcibly taken to the hospital and admitted and restrained to a bed for the night,” Kutty and Khan, the couple’s lawyers said in a statement.

“At no time prior to or during the assault did any of the police officers have reasonable grounds to believe that the victims committed any crime or constituted any danger to themselves or any other person,” the couple’s lawyers, Faisal Kutty and Kalim Khan, state in a letter to the Ontario police watchdog, the Office of the Independent Police Review Director (OIPRD) on June 10, according to globalnews.ca.

On top of beating the innocent elderly couple, because their attackers wear badges, Livingston was subsequently arrested and charged with assaulting a police officer and attempting to disarm a peace officer.

Both of these charges were later dropped.

Last year, Livingston filed a complaint against the officers with the OIPRD for the unlawful attack he had suffered at the hands of police. The “investigation” conducted by the the York Regional Police, found no wrongdoing by the officers.

Police claimed that a psychiatric order was issued for Pamelia that required her to stay at the hospital that night. However, records show that this form was filed two days after the couple was attacked by police.

“What has occurred in this instance was an egregious act of police overreach, use of excessive force against two elderly and vulnerable individuals,” states the June 10 letter from the lawyers representing the couple to the OIPRD. “Leaving a hospital should not be a dangerous activity even if you are elderly, black and are suspected of suffering from mental health issues.”

Now, after the government failed to hold themselves accountable for the savage attack, the taxpayers will be held responsible instead.