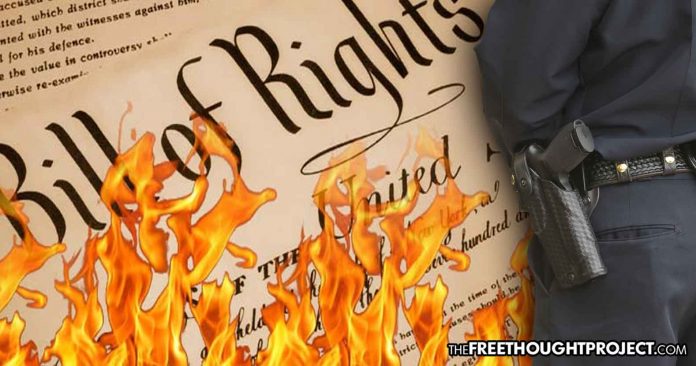 Bakersfield, CA — Robert Mitchell, an innocent black man in Bakersfield, CA was stopped by police because they found the air freshener hanging from his rear-view mirror to be suspicious. Mitchell, who was well informed on his constitutional rights, chose not to answer questions when police began berating him—something that former cops and judges have all recommended when you are stopped by police.

Mitchell knew he did not have to answer the questions the officers were asking, but the Bakersfield police arrested him anyway after apparently never caring enough to read the 5th Amendment to the Constitution which states:

“NO PERSON SHALL BE HELD TO ANSWER FOR A CAPITAL, OR OTHERWISE INFAMOUS CRIME, UNLESS ON A PRESENTMENT OR INDICTMENT OF A GRAND JURY, EXCEPT IN CASES ARISING IN THE LAND OR NAVAL FORCES, OR IN THE MILITIA, WHEN IN ACTUAL SERVICE IN TIME OF WAR OR PUBLIC DANGER; NOR SHALL ANY PERSON BE SUBJECT FOR THE SAME OFFENSE TO BE TWICE PUT IN JEOPARDY OF LIFE OR LIMB; NOR SHALL BE COMPELLED IN ANY CRIMINAL CASE TO BE A WITNESS AGAINST HIMSELF, NOR BE DEPRIVED OF LIFE, LIBERTY, OR PROPERTY, WITHOUT DUE PROCESS OF LAW; NOR SHALL PRIVATE PROPERTY BE TAKEN FOR PUBLIC USE, WITHOUT JUST COMPENSATION.”

Mitchell filmed the interaction in which he politely refused to give his name as well as politely refused to answer their questions, specifically noting that he had not been suspected of a crime. Instead of respecting his rights, police pulled Mitchell from the car, handcuffed, kidnapped, and threw him in a cage at the Kern County Central Receiving Facility.

According to the ACLU, who represented Mitchell in a case against the police department, Mitchell was kidnapped and held without charge for simply exercising his rights.

BUT MITCHELL, WHO SPENT 12 HOURS IN JAIL DESPITE NEVER BEING CHARGED WITH A CRIME FROM THE INCIDENT, WAS NOT ABOUT TO LET THE MATTER GO QUIETLY. HIS PROTESTS THAT HE HAD BEEN WRONGLY ARRESTED AND JAILED LED TO A LAWSUIT FILED ON HIS BEHALF IN JANUARY 2018 BY THE AMERICAN CIVIL LIBERTIES UNION FOUNDATIONS OF SOUTHERN AND NORTHERN CALIFORNIA AND THE LAW FIRM OF KIRKLAND & ELLIS LLP AGAINST THE CITY OF BAKERSFIELD AND POLICE OFFICERS.

THE CITY OF BAKERSFIELD AGREED TO PAY $60,000 TO SETTLE THE LAWSUIT. BECAUSE OF THAT AGREEMENT, THE ACLU HAS FORMALLY DROPPED THE SUIT.

THE LAWSUIT CHARGED MITCHELL’S RIGHTS HAD BEEN VIOLATED UNDER THE FIRST AND FOURTH AMENDMENTS TO THE UNITED STATES CONSTITUTION, THE CALIFORNIA CONSTITUTION, AND STATE LAW.

“I should never have been arrested for asserting my constitutional rights,” Mitchell said. “I hope that going forward no one in my community will be arrested for exercising their rights.”

And he is right, but according to the ACLU, “Community groups in the area have long protested that police officers overstep their authority and engage in intimidation tactics such as stopping people in cars and bicycles under the slightest pretense, then arresting them when they assert their rights. Groups have specifically criticized the Bakersfield Police Department’s Special Enforcement Unit — whose officers arrested Mitchell — for targeting members of racial minority groups.”

Below is the video of Mitchell’s arrest.

Sadly, this type of reaction, as our readers will know, is not uncommon. As TFTP previously reported, Rebecca Musarra was pulled over by two New Jersey state troopers after they suspected her of speeding. The troopers’ careless disregard for the law was subsequently captured on dashcam showing them arrest this woman for the sole act of practicing her constitutional right to remain silent.

Just like Mitchell’s case, in Musarra’s case, the taxpayers were held accountable for the criminal ignorance of the officers—not the officers.