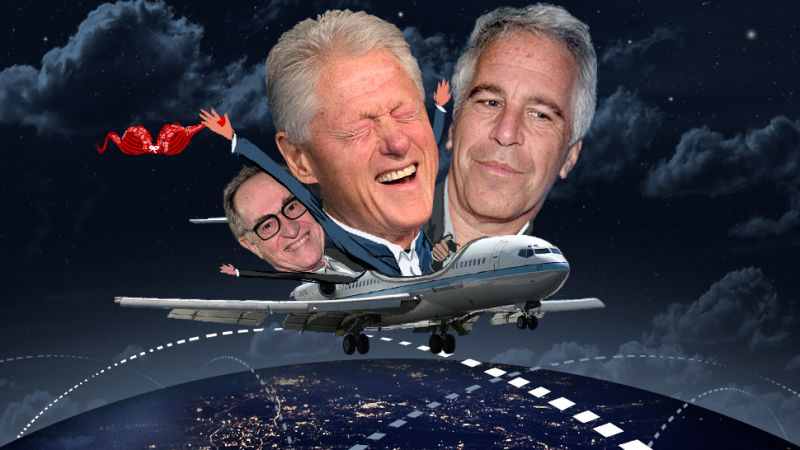 Shortly before the death of journalist Jen Moore she was working on a bombshell rape case.

True Pundit has put up a video that it claims is that same alleged Bill Clinton child rape victim.

Would it surprise anyone if Bill Clinton, who flew on The Lolita Express over two-dozen times, raped a boy?

Here’s the story from True Pundit:

Child sex trafficking investigators from the FBI’s New York field office have conducted an interview with a victim who provided chilling details about allegedly being raped by Bill Clinton on a yacht in New England when the victim was a young boy.

“We are treating him as a victim,” an FBI official told True Pundit in New York City prior the interview with FBI.

Top FBI officials arranged the interview with the victim, who said he was raped by Bill Clinton when he was just eight years old. The interview was conducted by the FBI’s task force that was established to investigate sexual assault and sex trafficking claims linked to Jeffrey Epstein and his associates. That task force, also attached to the NYPD, remains active even though Epstein reportedly committed suicide in federal custody just weeks ago.

“We still have a job to do here and that’s what we’re doing,” one FBI official told this reporter.

The interview and the allegations against Clinton are both detailed and disturbing. We have decided to publish the video of the victim’s account in his own words which contain explosive details of the alleged assault and much more. Again, his account is graphic. Nonetheless, both I and the federal agents with knowledge of the case believe the victim is credible.

Four weeks after contacting the Feds, Jen Moore was found dead in a D.C. hotel room. Moore died of an apparent seizure, though her death remains suspicious and the timing — beyond disturbing. After Moore’s death, the victim, fearful for his own life, decided to not go public with that interview.

Prior to Jen Moore’s death I had a discussion with her in July that we should simply publish the allegations against Clinton without tipping off the Feds. The victim at that time agreed to use his full name and identity and he said he believed he was prepared to handle any blow back. But Jen Moore said she wanted to work back channels and entice the Feds to voluntarily interview the victim. She set out to do just that. See her video below where she hauntingly describes her frustration with the Feds just days before her death.

I hope Jen would be proud. The victim here deserves credit for allowing us to publish these details. Some details the victim provided have been withheld because they could impact any active investigations but they could be published as the matters develop. Regardless, the victim’s account remains beyond disturbing and provides a first-hand account into chilling details of Satanic-like rituals surrounding the exploitation and sexual assaults of children.

Once again, this is a warning of graphic content. The victim fears for his safety but believes working with the FBI has offered him protection. I hope he is right. Again, he does deserve credit for green-lighting the publication of this interview and I personally hope it helps him accelerate his healing process.

Here is the video of the interview:

Read it ALL at True Pundit…

Again, would it surprise anyone if Bill Clinton had a thing for young boys as well as women and younger girls?

In barspeak we might call Bill Clinton a “Trysexual” which means he will try anything once.

I doubt he stopped at one.

Remember, this is the guy who posed for a painting in a Blue Dress that was later taken from Epstein’s mansion.

And, to my knowledge, no one else appeared in The Lolita Express flight logs 26 times.

Bill Clinton is going to get by with everything, more than likely.

How many victims of his sexual conquests will never live normal lives because of him?

And, since this is Bill Clinton we are talking about, how many were killed so that they would not open their mouths to the press?

I obviously have no proof of that, nor do I have proof of the numerous other suspected ARKANCIDES. Jen Moore is certainly at the top of the list today.

Nothing to see here folks.

The complicit mainstream media will call this fake news.

We may not have undeniable proof of anything, but we also aren’t stupid.

That video will inevitably be taken down at some point.

Please share this far and wide as we race the clock.