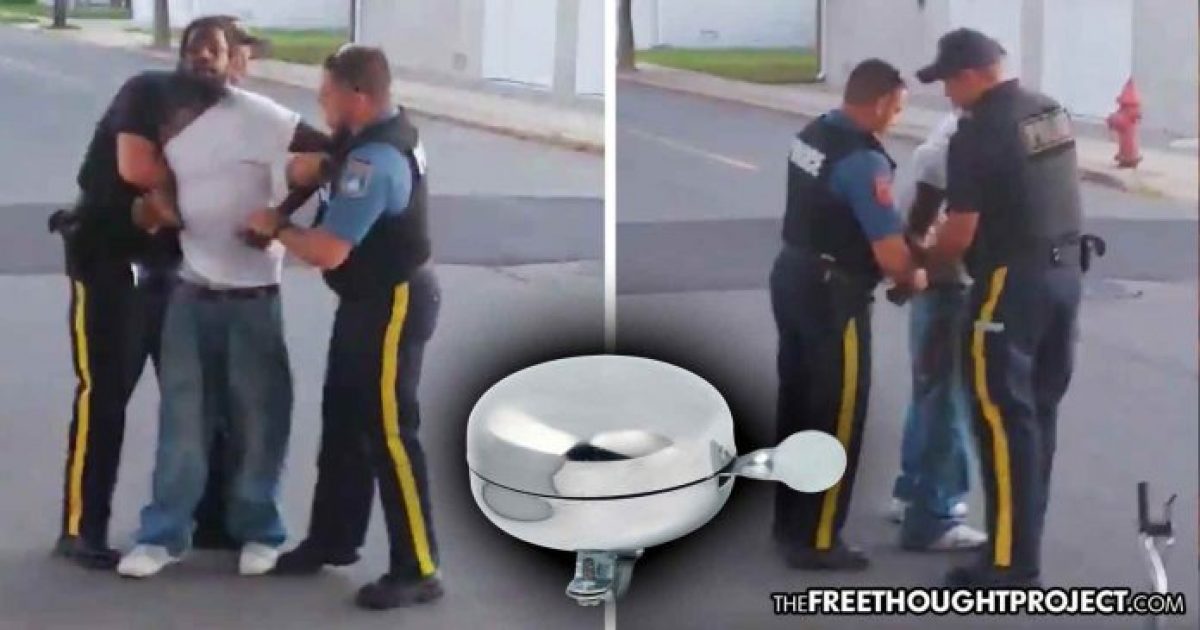 Seaside Heights, NJ — A fairly worrisome video has been shared with the Free Thought Project this week purporting to show a man being arrested after police stopped him for riding a bike without a bell.

The video, posted to Facebook by user A Dot Norwood, shows officers from the Seaside Heights police department temporarily detaining a man who was riding his bike.

In the first brief video, the officers appear to stop the man and then let him go. However, in the second video, we see them stopping him again.

According to Norwood and the man being arrested, police stopped him for riding his bike without a bell on it. As the video shows, however, police quickly escalated charges as the man became agitated after he was stopped for such a ridiculous reason.

Within just a few seconds, the police officers are telling the man that he will be arrested for obstruction of justice because he is upset that he is currently facing harassment for lack of a bell on his bike.

“Under arrest for what?” the man asks.

To which the police reply, “obstruction.”

“Obstruction of what?” the man asks, “You’re telling me I need a bell on my bike.”

“That’s illegal,” says the officer. Moments later, police move in and place the man in handcuffs

“You see this, right?” the man asks Norwood. “They’re arresting me for not having a bell on my bike.”

If everything the arrested man said was true, police were indeed just doing their jobs. According to the ridiculous New Jersey state law, bikes have to have a bell.

39:4-11. Audible signal
No person shall operate a bicycle unless it is equipped with a bell or other device capable of giving a signal audible for a distance of at least one hundred feet, except that a bicycle shall not be equipped with nor shall any person use upon a bicycle any siren or whistle.

After police got the man in handcuffs, the onlookers attempt to keep filming before they become worried that they too will be arrested.

The Free Thought Project reached out to the Seaside Heights police department who told us to contact the records department. As we had no name of the man being arrested, we were unable to seek out the exact charges he is facing.

If the man riding a bike committed an actual crime in which there was an actual victim, he most definitely deserved to be arrested. However, it appears from the video that the officers indeed stopped him for not having a bell on his bike and the resultant charges, if any, likely stemmed from the original stop.

As TFTP has reported on numerous occasions, riding a bike in a police state can be a dangerous act. In some instances, we’ve reported on individuals who’ve been mauled, nearly to death, by a police K9 for lacking a simple bike light. Also, last month, TFTP reported on a child who was run over by a police officer because, he too, lacked a light on his bicycle.