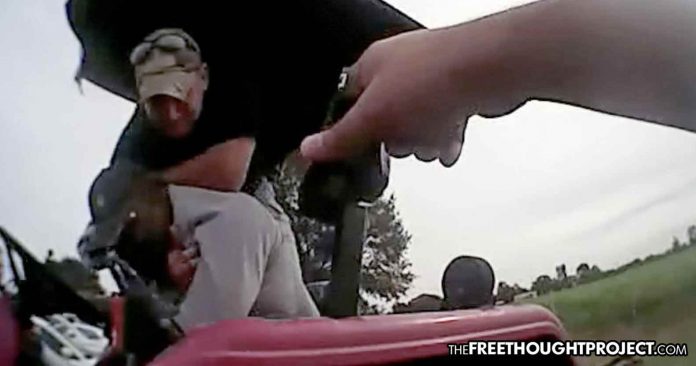 Marksville, LA — Last year, Armando Frank was sitting on his tractor when he was approached by police who were going to serve him a warrant for alleged trespassing. When Frank asked to see the warrant — which the cops never produced — he was tasered, choked, pulled from his tractor and killed. In the attack caught on video, never once did Frank try to hurt the officers.

As the police body camera video shows, within just a few moments of confronting Frank, officers grow agitated with his passive resistance. Frank is merely asking to see the warrant the officers claim to have, but they do not produce it, nor did they give him any reason for the arrest.

Instead, Frank is told to come with them downtown where they will show him the warrant. This was an idea that Frank did not like, so he merely sat there on his tractor in the parking lot of a Walmart.

During the incident, which took place Oct 20, 2017, two Avoyelles Parish sheriff’s deputies, Brandon Spillman and Alexander Daniel, along with Marksville Police officer Kenneth Parnell, tried to force Frank from his tractor. All three cops are named in a recent lawsuit on behalf of Frank’s estate.

According to a report in the Acadiana Advocate, a forensic pathologist hired by the parish had said in a report that manual strangulation was the primary cause of Frank’s death. The video shows Spillman mount the tractor behind Frank and apply a choke hold while another officer tries to pull him down. For a time, Frank is doubled-over while resisting. Officers had to carry Frank to a patrol car after his body went limp.

“His level of resistance starts out as passive. It doesn’t go to active and aggressive until he’s physically assaulted by these deputies,” Gregory Gilbertson, director of the criminal justice program at Centralia College in Centralia, Washington, said, according to the report.

Gilbertson explained that Franks’ requests to see the warrant and questions over what he was being arrested for were reasonable. But the officers involved wanted no part in answering those questions.

“There’s no exigent circumstance here,” Gilbertson said Thursday. “He’s not attempting to flee, he’s not assaulting anybody, he’s sitting on a tractor and he’s asking reasonable questions they are refusing to answer.”

Gilbertson explained that there was no need for the officer to restrict Frank’s airflow with the choke hold when all he wanted was to know what he was being arrested for.

“Most agencies now only authorize their officers to use it in ground-fighting situations where deadly force is their only other option,” Gilbertson said. “They might have pacified Mr. Frank if he had known what the warrant was for.”

Sadly, this was not the case. Instead brute force was used until the life was pulled from Frank’s body. What’s more, after he went limp and stopped breathing, officers completely ignored him. Had they acted during this time, they could’ve possibly saved his life. But they did not. And Frank died for asking for a warrant.

Philip Stinson, an associate professor of criminal justice at Bowling Green State University, who said the use of force by the officers was acceptable, also stated that the officers could be liable for negligence for failing to assist Frank once he went unconscious.

“Once they got him on the ground and he’s dead weight, at that point I think it’s time to check his airway,” Stinson said. “He was unconscious. He had stopped breathing at that point at a minimum, it seems to me.”

The officers involved all went up in front of a grand jury in March who predictably refused to indict them.

The warrant for Frank was over a property dispute with his neighbors who accused him of trespassing. He hadn’t physically harmed anyone or otherwise destroyed property or stolen anything. He was simply accused of being somewhere he shouldn’t have been—and for this, he would lose his life.

For those who may not recall, Frank was killed in the same town and by the same department who murdered 6-year-old Jeremy Mardis. Mardis was shot and killed by two cops as he sat buckled in to the front seat of his dad’s truck.

Below is this disturbing video that shows just how far situations can be escalated for simply asking for a warrant.