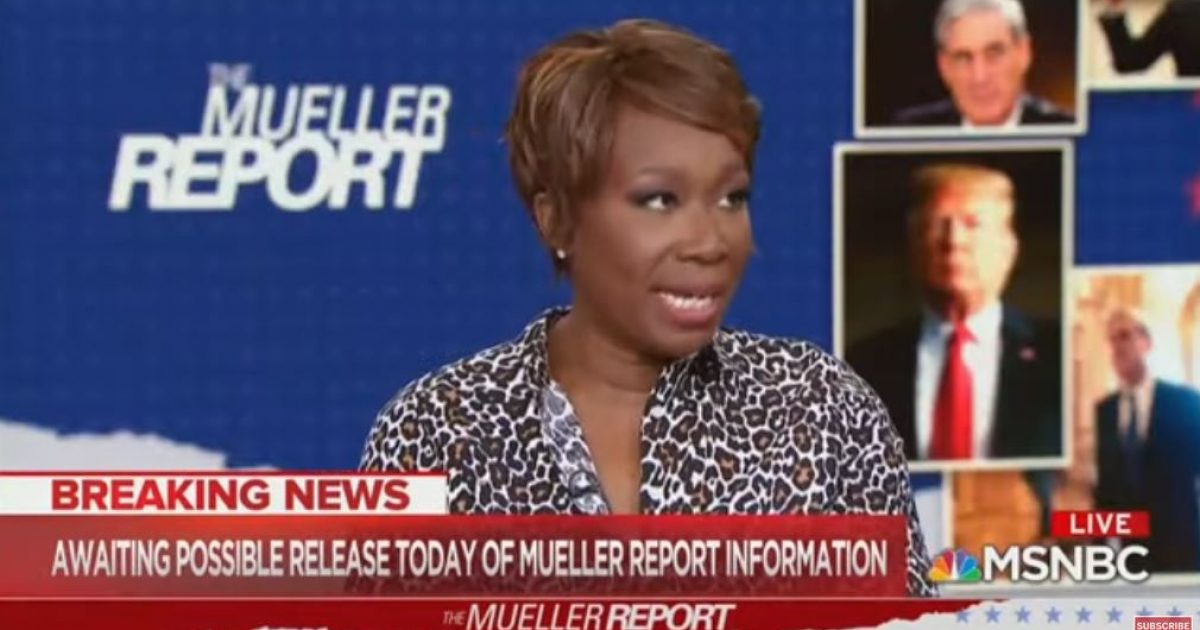 Trump-hating liberals are having a very difficult time dealing with news that there will be no more indictments following the release of Special Counsel Robert Mueller’s report into allegations that the Trump campaign colluded with Russia to win the 2016 election. One of those having a difficult time dealing with reality is Joy Reid, the MSNBC propagandist who once declared that Republican Steve Scalise deserved to get shot for his conservative record.

Reid was so beside herself that she told her audience that the report has what she feels are “the seeds of a cover-up.”

“The fact that this investigation takes place within the justice Department which Donald Trump essentially controls and that he got rid of the problem, Jeff Sessions, who the one decent thing that he did was just recuse himself, this guy is not recused, it feels like the seeds of a cover-up are here,” she said.

“Well, I mean, theoretically it could happen, right?” said Malcolm Nance. “These are humans. They are all fallible maybe he does feel some sort of loyalty to him. Bill Barr is one guy. There are secretaries. There are people who have to handle these documents. There are the FBI agents who did this themselves. I don’t think that there’s room for a cover-up because why cover up the greatest scandal in the history of the United States with the greatest scandal in the history of the United States, an attorney general trying to engineer that. I don’t believe that’s going to happen because if they do, then you can just see copies of this thing falling out by the palate load in front of The Washington Post.”

Keep in mind that Democrats and other Trump-haters have invested more than two years in this attempt to enact a coup d’etat against President Trump. They were hoping that Mueller would end up frog-marching the president out of the White House in handcuffs.

But that didn’t happen. And it doesn’t look like it’ll happen any time soon.

Unfortunately, as Faye Higbee pointed out here, the Trump-Deranged Democrats in Congress (like Adam Schiff) are determined to do what Mueller couldn’t, facts and truth be damned.

I knew it. Mueller is the hero Dems have on their altars… until they don’t get what they want then they turn against him because “it’s a cover up”. So predictable.