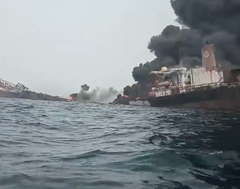 Nigeria could be facing an environmental disaster as a floating, production, storage, and offloading (FPSO) vessel “Trinity Spirit” carrying 2 million barrels of crude exploded off the coast, according to The Independent.

The incident occurred on Thursday morning at the Ukpokiti oil field off Nigeria’s coast. Shebah Exploration & Production Company Ltd (SEPCOL), the owner of the FPSO vessel, confirmed the incident. According to Reuters, it’s believed the ship had ten crew at the time of the explosion though no one has been accounted for.

Dramatic images of the incident have surfaced on social media and show the large vessel fully engulfed in flames. Bloomberg’s Javier Blas confirmed the explosion and published images of the burning ship.

Some shocking photos from Nigeria, where a FPSO has suffered a spectacular fire. We have confirmed an explosion and a fire, and the company says no casualties. Beyond, **local media is reporting** that the 'Trinity Spirit' sank. The explosion was near the Escravos terminal #OOTT pic.twitter.com/CvrZE7RG0K

Videos show a thick black column of smoke rising from the partially sunken vessel as concerns about an environmental disaster mount.

SEPCOL confirm the FPSO Trinity Spirit has exploded off the coast of #Nigeria this morning, 10 reportedly killed. pic.twitter.com/bqe3bZPzQf

SEPCOL’s CEO, Ikemefuna Okafor, said an investigation is already underway to find the source of what caused the explosion. The exec said Chevron and support from local communities had assisted with fire and spill management operations.

“At this time, there are no reported fatalities, but we can confirm that there were ten crew men on board the vessel prior to the incident and we are prioritizing investigations with respect to their safety and security,” he said.

It’s not entirely clear how many barrels of oil were on the vessel during the explosion, but it can hold up to 2 million.

Brent futures slumped 1.34%, or about $1.20 per barrel, to $88.26 as traders ignored the developments off the coast of Nigeria and focused their attention on whether OPEC+ will increase supply.

Goldman Sachs Group Inc. expects brent to be over $100 as the latest six-week rally has been underpinned by soaring demand, shrinking stockpiles, and backwardation in the futures curve.

The next move in brent follows OPEC+’s decision on output.