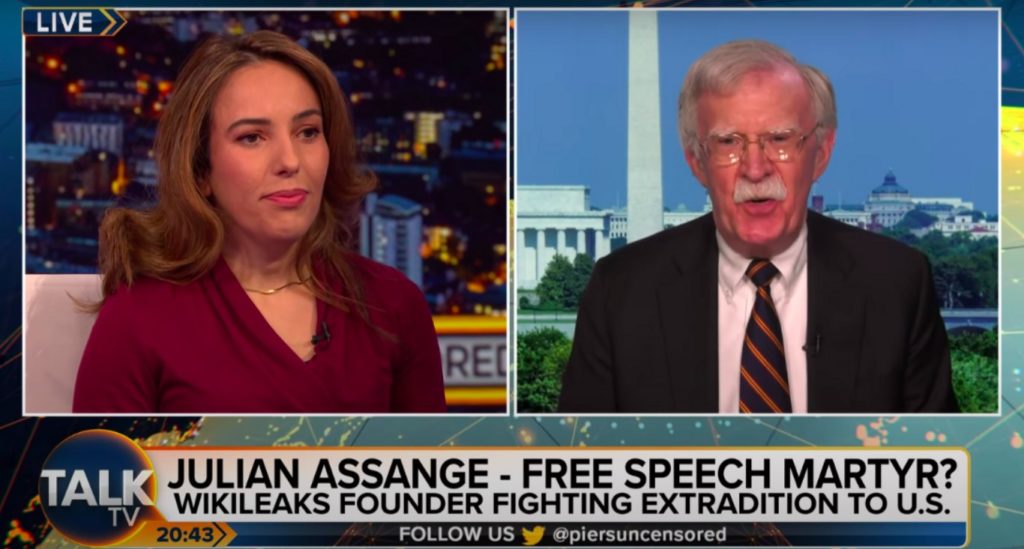 Stella Assange just delivered a beatdown on one of her husband’s persecutors that was so scorched-earth demolishing I feel like I need a cigarette after watching it.

In an appearance on Piers Morgan Uncensored, the wife of WikiLeaks founder Julian Assange explained the threat her husband’s persecution poses to press freedoms around the world and the profound suffering his imprisonment has inflicted upon him. As some kind of bizarre counter-balance to the family of a persecuted journalist pleading for basic human rights, Morgan invited on John Bolton, the man who was the National Security Advisor to President Trump when Assange was imprisoned under a US arrest warrant. Which if you think about it is kind of like having a sex trafficking victim on your show and then bringing in Ghislaine Maxwell for a balanced perspective.

After Morgan introduced the segment and Assange laid out some facts of her husband’s plight, Bolton was given the floor to explain why persecuting a journalist for telling the truth is actually good and right. He went over the usual smearmeister talking points that Assange is not a journalist and endangered people around the world with his publications exposing US war crimes, adding that the possible 175-year sentence Assange stands to face if convicted under Espionage Act was inadequate, and that he hoped Assange “gets at least 176 years in jail for what he did.”

Stella responded by calling Bolton a war criminal, right to his bloodthirsty face.

“Well of course Ambassador Bolton is kind of the ideological nemesis of Julian,” Assange coolly replied. “He has during his time for the Bush administration, and later the Trump administration, sought to undermine the international legal system, ensure that the US is not under the International Criminal Court’s jurisdiction. And if it was Mr Bolton might in fact be prosecuted under the ICC: he was one of the chief cheerleaders of the Iraq War, which Julian then exposed through these leaks. So he has a conflict of interest here.”

“Well that’s ridiculous!” Bolton said with a nervous laugh at the accusation. “I have an opinion, so does Assange’s wife; I guess we both get to speak them. You know I think that what she fears is being brought to the United States and having Assange put under trial. If he’s innocent, if she can at least show reasonable doubt that he’s not guilty, he’ll go free. What’s she worried about?”

Morgan interjected that the concern is likely the chance of a fair trial, to which Bolton responded with a demand that Stella herself say that she didn’t believe her husband could receive a fair trial in the United States.

“Let her say that Julian Assange could not get a fair trial in America; let her say it,” Bolton replied.

“Well he cannot get a fair trial in America, because he is being prosecuted under the Espionage Act and he cannot bring a public interest defense,” Assange replied. “He cannot say ‘I published this information because it was in the public interest,’ precisely because it is under the Espionage Act. And it is the first time that a publisher has ever been prosecuted under this act, something that constitutional lawyers in the United States have been warning could happen for the past 50 years. And The New York Times and The Washington Post say this prosecution strikes at the heart of the First Amendment.”

Bolton replied, on no apparent basis, that The New York Times and The Washington Post were wrong and that their position on the Assange case is “dangerous”, and babbled some nonsense about Assange being a “hacker who breaks and enters into secure information.”

“Not even the US alleges that,” Assange replied, entirely correctly.

Find something in life you love doing as much as John Bolton loves trying to start wars. pic.twitter.com/M7zsAyMcCC

Ahh man, that’s the stuff. It’s so annoying to see this actual war criminal invited on mainstream news networks time and time again to drum up support for increased military aggression in every conflict the US empire is involved in from day to day, without ever being challenged or called out for what he is. For someone to say on mainstream television that he’s a war criminal who just doesn’t want people holding him accountable or shining a light on his crimes is a rare treat for anyone who’s been watching this monster operate all these years.

This is the man who just 24 hours prior to this writing put out an article titled “Putin Must Go: Now Is The Time For Regime Change In Russia,” just the latest in this psychopath’s relentless campaign to start World War III at every possible opportunity. It’s just so freakish and bizarre that there are people whose actual job is to continually work toward creating as much death and destruction in the world as they can, and that they are elevated to the forefront of public attention by the most prominent platforms in the world.

Event: HANDS OFF #ASSANGE
Live from the DoJ 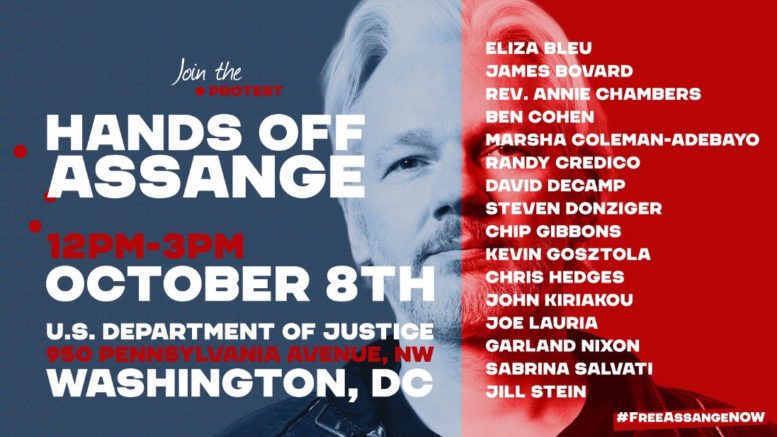 This happens as Assange supporters prepare to demonstrate for his freedom on October 8th. In the UK a massive human chain to surround Parliament is scheduled for 1PM London time in a show of solidarity with the world’s most important journalist, and from 12PM to 3PM DC time there will be a demonstration at the US Department of Justice with appearances by some of the best humans in the world.

If you can’t attend live you can watch the London event online here and watch the DC event here (set an alarm on your phone right now so you remember). There will also be other Assange events scheduled at or around the same time; check out this link to find one in a city near you.

My work is entirely reader-supported, so if you enjoyed this piece please consider sharing it around, following me on Facebook, Twitter, Soundcloud or YouTube, buying an issue of my monthly zine, or throwing some money into my tip jar on Ko-fi, Patreon or Paypal. If you want to read more you can buy my books. The best way to make sure you see the stuff I publish is to subscribe to the mailing list for at my website or on Substack, which will get you an email notification for everything I publish. Everyone, racist platforms excluded, has my permission to republish, use or translate any part of this work (or anything else I’ve written) in any way they like free of charge. For more info on who I am, where I stand, and what I’m trying to do with this platform, click here. All works co-authored with my American husband Tim Foley.