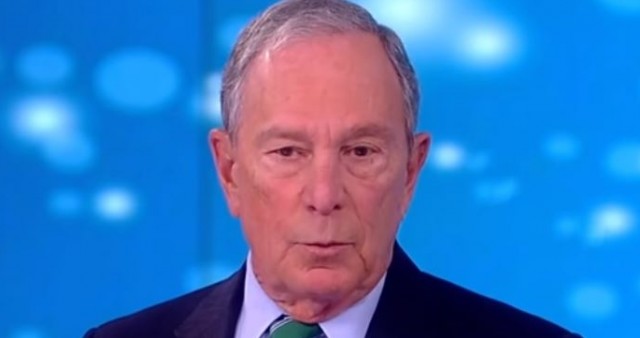 That Time When Michael Bloomberg Said Raising Taxes On Poor People Will Help Them Live Longer – No, Really (Video)

(TNS) It’s hard to believe that, at one time, former NYC Mayor Michael Bloomberg, founder of the Bloomberg media empire, was ever a Republican, but he was. Then, when he thought it would suit him politically, he became an Independent. Now, the transformation is complete: He’s running for the 2020 Democratic presidential nomination.

But it’s appropriate given what his political stances and positions are.

He’s a gun control guy. He believes in higher taxes. He thinks government is the solver of problems, not the creator of them. And he’s a gigantic hypocrite.

Speaking of taxes, Bloomberg loves them so much he once said that if poor people had their taxes raised just like rich folk, they’d live a longer life.

Yes, he really said that.

“Some people say, well, taxes are regressive. But in this case, yes they are. That’s the good thing about them because the problem is in people that don’t have a lot of money. And so, higher taxes should have a bigger impact on their behavior and how they deal with themselves,” he said at a forum.

“So, I listen to people saying ‘oh we don’t want to tax the poor.’ Well, we want the poor to live longer so that they can get an education and enjoy life. And that’s why you do want to do exactly what a lot of people say you don’t want to do.

Mr. Anti-Big Gulp wants to control your behavior too.

“The truth of the matter is that there aren’t very many coal miners left anyways and we can find other things for them to do” (like what, Mike?) “But the comparison is: a life or a job. Or, taxes or life? Which do you want to do? Take your poison,” Bloomberg said.

“So its regressive, it is good. There are lots of tax experts in the room. And fiscal experts, and I’m very pleased that they hear you say that. And they all say that two things in life which are absolutely certain. One is death, the other one is tax. So you use one to defer the other one,” noted moderator Christine Lagarde.

You know what spurs big government statists to pursue behavior modification/control policies like the ones Bloomberg favors? Big government.

In terms of health care, for instance, the government is probably the biggest consumer of healthcare services in the country. So naturally, if Uncle Sam is spending hundreds of billions per year on healthcare, Uncle Sam is gonna want to make rules that will lead to spending less on healthcare.

But we don’t live in a socialist or Communist utopia. We live in America, where we’re supposed to be free from nanny state government.

So here’s a better suggestion: How about we get government out of the healthcare business altogether? Private Medicare. Privatize VA care. And levy fewer taxes.

That alone would make healthcare more competitive and, thus, cheaper.

We’ve been doubling and tripling down on more government control over healthcare for decades now, and costs are not going down. They keep rising, in fact.

It’s time to reject the Left’s big government approach to ‘reforming’ healthcare. The more control over it we give to Washington, the more expensive and inefficient it gets.