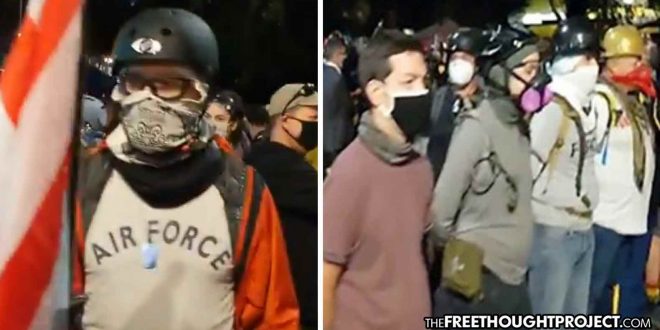 Video uploaded to Twitter Friday night shows a “wall” of veterans joining in with protesters and forming a barrier between them and the police. New York Times reporter Mike Baker tweeted the video out late Saturday night with the following caption:

Another huge crowd tonight in Portland, including a new “wall” on the front lines: a Wall of Vets. Here’s a look at the line of military veterans getting set up here in front of the federal courthouse. Behind them, the Wall of Moms and the Wall of Dads are arriving.

Another huge crowd tonight in Portland, including a new "wall" on the front lines: a Wall of Vets.

Here's a look at the line of military veterans getting set up here in front of the federal courthouse. Behind them, the Wall of Moms and the Wall of Dads are arriving. pic.twitter.com/gGnXHjI3k2

Veterans donned different signs letting the police and others know who they were and why they were there.

“I am an American patriot. Federal troops defend property, but this does give them the right to take away my constitutional freedom,” another sign from a veteran read.

In Portland, the presence of federal troops has garnered national and even world wide attention as video after video has surfaced showing them conducting snatch and grabs in unmarked vehicles in what looks like scenes from Nazi Germany.

Multiple videos have surfaced of federal troops with no identifying markings on their uniforms grabbing and then hauling away protesters into unmarked vehicles. These snatch and grabs even received the praise of president Donald Trump who said this week that the troops are doing a fantastic job.

“In Portland they’ve done a fantastic job… No problem. They grab them. Lot of people in jail,” he said — as if this is something to celebrate.

President Trump: "In Portland they've done a fantastic job… No problem. They grab them. Lot of people in jail." pic.twitter.com/gL8w4ceoHq

Even the mayor of Portland found himself a victim of the police violence this week as he joined the protesters only to be tear gassed shortly after. This too, received the praise of the police state-worshiping potus.

“[Portland Mayor Ted Wheeler] made a fool out of himself,” Trump said during a Fox News interview.

“He wanted to be among the people so he went into the crowd and they knocked the hell out of him. That was the end of him. So it was pretty pathetic.”

Regardless of whether or not you agree with the protesters, the overwhelming majority of them are peaceful and the police reaction to them is not only provoking non-violent people into lashing out, but it is incredibly tyrannical.

“I’m not gonna lie, it stings,” Wheeler said. “It’s hard to breathe, and I can tell you with 100 percent honesty that I saw nothing that provoked this response.”

When the president of the “land of the free” praises federal troops carrying out snatch and grabs and unprovoked tear gassing of politicians, something has gone seriously wrong.

No one here is condoning the destruction of property or unprovoked acts of violence, those who carry out such acts are criminals. That being said, however, the majority of the protesters are peaceful and police are not differentiating between the peaceful ones and the very small group of criminal looters. This is a problem.

Hopefully the presence of these veterans shows the president and the others who support such police state tactics that they are on the wrong side of history.

As the Free Thought Project reported in 2016, over 2,000 members of Veterans Stand for Standing Rock traveled to the campsite near Cannon Ball, North Dakota, to create a human barrier between protesters and law enforcement.

The veterans’ presence helped to ease some of the pressure of the water protectors who — just like the protesters in Portland — endured relentless punishment from the heavily militarized police present at the scene.