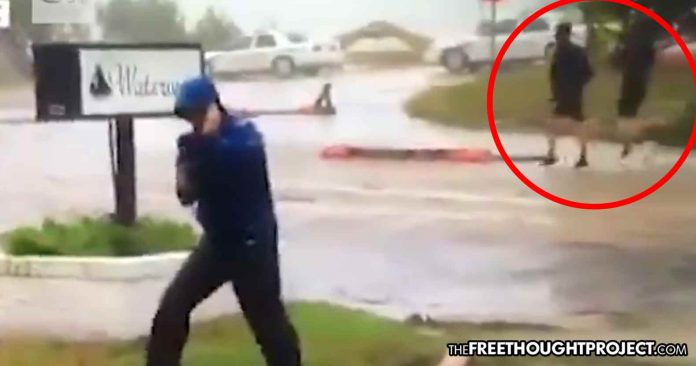 The Weather Channel is being criticized after a video was posted online that shows a reporter dramatically swaying in the rain and acting as if he can barely stand as he covers Hurricane Florence on live TV, while two pedestrians walk by and appear to be completely unaffected by the storm.

The reporter is seen looking as if he is struggling to stand up because the wind and the rain are so strong—creating the picture of a determined journalist who is risking it all to show the public just how dangerous the storm is. But two men who are seen walking down the street a few yards behind him appear as if they are in a completely different location altogether, and they seem to have no problem with the strong weather conditions the reporter is battling.

So dramatic! Dude from the weather channel bracing for his life, as 2 dudes just stroll past. #HurricaneFlorence pic.twitter.com/8FRyM4NLbL

“You can’t trust the mainstream media. Ever,” one Twitter user commented, with another responding, “And the establishment wonder why #FakeNews has become such an incendiary topic.”

Other commenters compared the exaggerated coverage to CNN, saying they thought they were watching the infamous network instead of The Weather Channel, and they pointed out the inconsistencies in the reporter’s movements, given the actual wind conditions. They also claimed that the reporter’s actions made the hurricane look much more dramatic than it actually was.

UPDATE about those two… pic.twitter.com/xlLrkrbVTK

Unfortunately, because the reporter chose to give an exaggerated version of the story in the interest of “good TV,” his actions are now the focus, and any legitimate information he might have had to share with residents preparing for the storm has been lost.

Nearly 1 million people are reportedly without power after the storm made landfall in North Carolina on Friday, and although it has since been downgraded to a tropical storm, it has still resulted in massive flooding and has wreaked havoc on trees and power lines.

The dangerous conditions created by Florence have resulted in at least seven deaths in North Carolina since Friday. The Charlotte Observer reported that a mother and baby were killed when a tree fell on their house; a 78-year-old man died after he was electrocuted while trying to plug in a generator; a 77-year-old man died after he was “blown down by the wind” while checking on his dogs; a woman died from a heart attack after she called 911 and they couldn’t get to her because of fallen trees blocking the road; and two more deaths were reported on Saturday morning.

“Our hearts go out to the families of those who died in this storm,” Pender County Emergency Management Director Tom Collins said in a statement. “Hurricane Florence is going to continue its violent grind across our state for days. Be extremely careful and stay alert.”

This is not the first time a mainstream media network has come under fire for either staging a scene or exaggerating conditions to gain attention from the public.

Disgraced former NBC Nightly News anchor Brian Williams was called out in February 2015 for his dramatic reporting in New Orleans during Hurricane Katrina in 2005. Williams claimed that he contracted dysentery from a lack of clean drinking water while he was covering the storm, that he saw a dead body floating right by his hotel room window, and that his hotel was “overrun with gangs.” However, longtime residents have argued that there was plenty of bottled water available, Williams was staying in an area where there was no massive flooding, and there were no gangs overtaking the hotel.

CNN was also caught staging a fake protest in June 2017, after three terrorists drove a van into a crowded marketplace in London and killed eight pedestrians. The protest appeared to show Muslims who were standing in solidarity with the victims, which was ironic because there were already several Muslim groups across the world condemning the attack, and CNN could have easily found an actual demonstration instead of staging their own for their report.