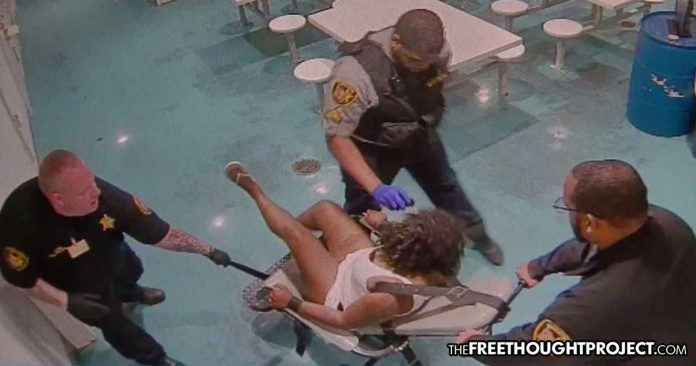 Cleveland, OH — A deeply disturbing video has been released from a surveillance camera inside Cuyahoga County jail of multiple officers strapping a woman to a restraint chair before hitting her and then covering her face in pepper spray foam. The nature of the video were so horrifying that the officers involved have all been charged with crimes.

The incident happened on July 16, 2018 when an innocent woman, Chantelle Glass was brought to jail. Despite being strapped down to a chair and savagely tortured, Glass was never charged with a crime but because she had an unpaid traffic ticket, they held her in jail.

Officer Idris-Farid Clark is one of five officers charged in multiple attacks on inmates. The video of Glass’ incident was just released this week as part of a claim cleveland.com filed against the county in the Ohio Court of Claims.

According to Cleveland.com, the county spent months suppressing and refusing to release the video and disciplinary records stemming from Glass’ abuse. After watching the video, we now know why they wanted to keep it secret. It is utterly shocking.

GLASS WAS ARRESTED AND BROUGHT TO THE JAIL AFTER A HEATED ARGUMENT WITH HER SISTER. SHE WAS NEVER CHARGED IN THE CASE, BUT WAS BEING HELD IN THE JAIL BECAUSE SHE FAILED TO SHOW UP FOR COURT FOR AN OLD TRAFFIC TICKET.

IN A PREVIOUS INTERVIEW WITH CLEVELAND.COM, GLASS SAID SHE GOT MAD WHEN OFFICERS REFUSED TO ALLOW HER TO MAKE A PHONE CALL TO LET SOMEONE KNOW SHE WAS IN THE JAIL. THAT IS BACKED UP WHAT OFFICERS WROTE IN THEIR DOCUMENTATION OF THE INCIDENT RELEASED LATE TUESDAY.

GLASS’S ACCOUNT OF WHAT HAPPENED NEXT DIFFERS FROM WHAT OFFICERS WROTE IN THEIR REPORT. SHE SAID AN OFFICER THREATENED TO PEPPER-SPRAY HER UNLESS SHE STOPPED BANGING ON HER CELL DOOR AND DEMANDING HER PHONE CALL.

SEVERAL OFFICERS WROTE THAT GLASS THREATENED THE OFFICERS FROM THE TIME SHE WAS BOOKED TO WHEN CLARK APPROACHED HER CELL.

However, the officers were lying in their reports and took several moves to cover their tracks, including turning off body cameras before and during the incident.

Glass — having been kidnapped and thrown in a cage for no reason — merely wanted to let her family know she was in jail and for this she was tortured.

After she kept complaining and demanding to make a phone call, officers moved in to silence her by putting her in a restraint chair. She was entirely compliant, as the video shows, when officers walked her out of her cell in handcuffs.

As Glass was being strapped into the chair, she raised her leg causing the officers to escalate force. Officer Robert Marsh then took a step back and slugged Glass in the face.

At this point, Clark then grabs the pepper spray foam can and holds it just six inches from Glass’ face and begins spraying—despite policy requiring them to be 3 feet or farther away. For six seconds, Clark doused Glass’ face, completely covering it, making it nearly impossible for her to breathe.

THE VIDEO SHOWS GLASS AS SHE WAS WHEELED AWAY, BUT DOES NOT SHOW WHERE SHE WENT AFTER. THE DOCUMENTS SAY SHE WAS TAKEN FOR TREATMENT IN THE MEDICAL UNIT.

GLASS, WHO SUFFERS FROM ASTHMA, TOLD CLEVELAND.COM THAT THE OFFICERS LOCKED HER IN A SMALL CELL BY HERSELF, POURED WATER OVER HER AND LEFT HER THERE FOR TWO HOURS.

Naturally, the police union is not happy with the charges against the officers and is speaking out in their defense, saying the actions were within policy.

Apparently, it is “policy” to strap a woman to a restraint chair, beat her and douse her in chemical weapons over asking to make a phone call. Terrifying indeed.

As you watch the video below, remember that this entire incident was over and old traffic ticket Glass forgot to pay. This is the reality of the American police state.