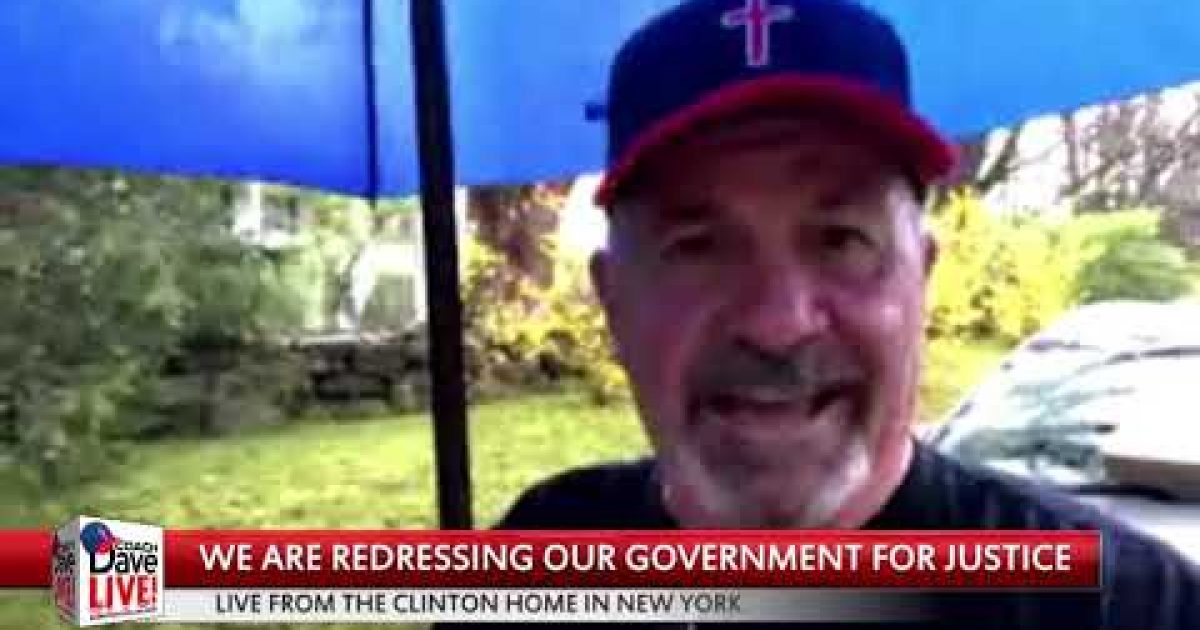 A little over a month ago I visited Hillary Clinton’s house in Chappaqua, NY where I called for her indictment. I went alone. I figured it was time somebody from the uber “silent majority” to DO something.

There are plenty of talkers in America. Spend 10 minutes on FAKEBOOK and you will realize that there are gobs of “podcasts” streaming on the internet. Everybody is talking. Offering their opinion on what needs to be done to rescue this nation.

But very few actually DO anything. When was the last time you saw Rush out in public actually DOING something…using his platform to actuate change in the culture? Talk is cheap. That is why there is so much of it going on. Talking ABOUT a problem is not SOLVING the problem. Action is required to effect change. Talking is not acting.

The nation is blessed with hundreds of Patriot groups. They care about this country but aren’t really DOING anything to rescue it. Oh, they have their meetings where they discuss ideas but rarely do you see any culture-changing actions come from those meetings.

Meanwhile, the LEFT is constantly taking their grievances to the streets. They move the ball down the field. The LEFT actually gets onto the playing field and act upon what they believe. Have you happened to notice which side is winning? Evidently, ACTING is more effective than TALKING.

Pastors talk, radio hosts talk, bloggers talk, conservative politicians talk, patriots groups talk, while Antifa. Black Lives Matter, Code Pink, Move On, and their ilk flood the streets and ACT upon what they believe. The TALKERS then talk about what the DOERS are doing.

…and meanwhile America goes down the tubes while the TALKERS explain. Turn on Rush and his wannabes and they will give you play by play analysis of how the LEFT is winning the game. The airwaves ripple 24 hours a day as the talkers TALK about how the battle is being lost.

TALKERS talk and DOERS do. The DOERS are winning. Look at the scoreboard.

Would you actually like to win for a change? Are you willing to actually follow the LEFT and become “doers of the Word and not hearers only?”

A month ago, I visited the Clinton’s home in Chappaqua and demanded that HILLARY BE INDICTED. I went alone. I videoed my action. I challenged others to get involved. You can watch the video HERE.

The TALKERS laughed at my DOING. Some ignored me and called me a lunatic. But some folks who want to be DOERS noticed what I DID. They wanted to DO something as well. So they got organized.

Visit www.EqualJusticTour.com, study what is on this website, and then get involved. Get off of the bench and into the game.

Hundreds of us are getting in our cars and driving to Chappaqua. We are going to meet up and caravan together into town and demand that the government do its job and INDICT HILLARY CLINTON. She is a felon. James Comey told us she was, but he explained that there was a different system of justice for the rich and powerful. Check out his video on the website. He charged her with four felonies.

Are we going to let her get away with it? Are we going to sit silently in our homes and TALK about how unfair the system is or are we going to actually DO something and demand that the Justice Department do their job!! If you had done what Hillary did would you be walking around as a free man? Why is she? Doesn’t that bother you? Don’t you think WE should DO something?

Well, we are. Please join us on our Equal Justice Tour. It is just the beginning of a movement of DOERS who want to see the rule of law reestablished in America. Equal Justice Under The Law is our demand. We must show our elected officials that justice matters to us.

This event will be peaceful. You may not even leave your car. We won’t stoop to the harassing actions of the Left but merely “petition the government for a redress of our grievances” by demanding her indictment. She isn’t some TV personality. She was a public official who betrayed her oath. We demand EQUAL RIGHTS NOT SPECIAL RIGHTS.

All the info that you need can be found at www.EqualJusticeTour.com. The time is now to come to our country’s aid. Talk is cheap. Our window of time is short. It is our time DO something.

Many have criticized us. Many more will. But they are TALKERS and we are DOERS. If you love this country and you are not afraid to stand up, please load up your car, make a few signs, and join us in Chappaqua.

If you can’t GO you can SUPPORT our efforts here

This could be the start of something BIG. Let’ reestablish Equal Justice in America. Our grandchildren are counting on us.