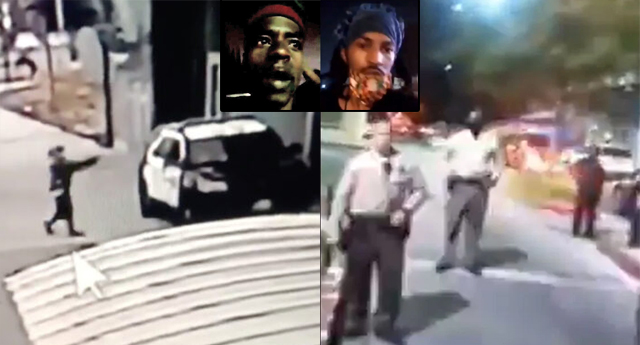 Two Los Angeles County sheriff’s deputies were shot repeatedly at point-blank range in an ambush on Saturday and Black Power protesters responded by gathering outside the hospital where they were being treated to shout “we hope they die” and threaten officers that “you’re next.”

The ambush took place at a Metro station in Compton.

Update: One male deputy and one female deputy were ambushed as they sat in their patrol vehicle. Both sustained multiple gunshot wounds and are in critical condition. They are both currently undergoing surgery. The suspect is still at large.

Update: The gunman walked up on the deputies and opened fire without warning or provocation. pic.twitter.com/cBQjyKkoxJ

#breaking #update
Here is video of ambush on two #LASD deputies.
Both in critical condition after being shot in the head.
It is grainy video.
We have stopped it prior to suspect opening fire.
Still no description of the suspect. pic.twitter.com/Gt7MFa6bGC

One of the deputies shot was a 31-year-old mother of a 6-year-old boy and the other was 24-year-old who was sworn in just some 14 months ago.

The shooter was reportedly described as a “dark skinned male.”

Both LASD deputies are alive. One of the deputies described the shooter as a “dark skinned male.” He is at large.

Protesters gathered outside a local hospital to celebrate the shooting and berate police.

To the protesters blocking the entrance & exit of the HOSPITAL EMERGENCY ROOM yelling "We hope they die" referring to 2 LA Sheriff's ambushed today in #Compton: DO NOT BLOCK EMERGENCY ENTRIES & EXITS TO THE HOSPITAL. People's lives are at stake when ambulances can't get through.

“Africa Town Coalition” protesters filmed themselves shouting “we hope that bitch dies,” “you’re next” and threatening officers that “y’all gonna die one by one.”

Black Lives Matter activists confront law enforcement at Los Angeles hospital where wounded officers were taken after they were shot.

"To their family: I hope they f**king die.”
https://t.co/bPgatQZYRI

One protester and a journo were arrested:

(2/3) During his arrest, a struggle ensued at which time a female adult ran towards the deputies, ignored repeated commands to stay back as they struggled with the male and interfered with the arrest…

(3/3) The female adult, who was later identified as a member of the press, did not identify herself as press and later admitted she did not have proper press credentials on her person. Both individuals have been arrested for 148 P.C.

ABC7 showing video of radio reporter being taken down to the pavement by officers, handcuffed and led to a patrol car outside of hospital where two #LA County deputies shot in ambush are being treated @LASDHQ #crime #SoCal pic.twitter.com/rTg1UdeDKA

President Trump on Sunday called for the shooter to get the death penalty.