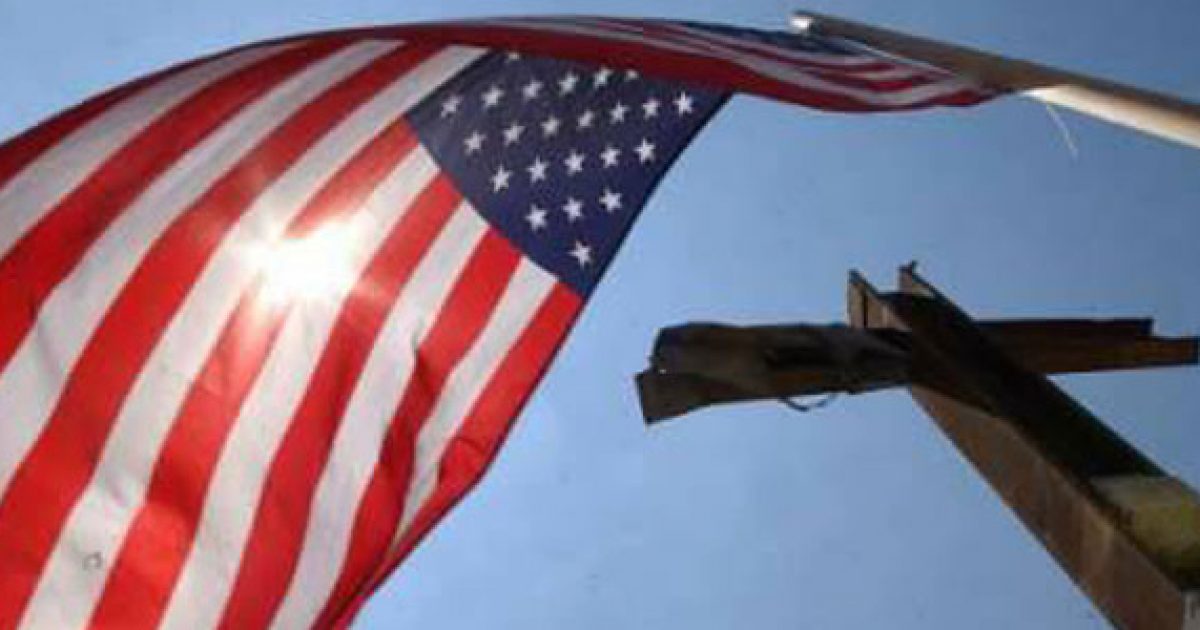 George Washington dictated a “talk” to the Cherokee Nation, August 29, 1796:

“Beloved Cherokees, The wise men of the United States meet together once a year, to consider what will be for the good of all their people …

I now send my best wishes to the Cherokees, and pray the Great Spirit to preserve them.”

Twelve of the original 13 States sent delegates to Philadelphia where they drafted the U.S. Constitution (Rhode Island boycotted the Convention.)

The 55 delegates who wrote the U.S. Constitution belonged to the following denominations:

and Dr. Franklin, who called for prayer at the Constitutional Convention, June 28, 1787, stating:

“In the beginning of the contest with Great Britain, when we were sensible of danger, we had daily prayer in this room for the divine protection.

Our prayers, Sir, were heard and they were graciously answered.

“I have lived, Sir, a long time, and the longer I live, the more convincing proofs I see of this truth — that God Governs in the affairs of men.

And if a sparrow cannot fall to the ground without His notice, is it probable that an empire can rise without His aid? …”

“We have been assured, Sir, in the Sacred Writings, that ‘except the Lord build the House, they labor in vain that build it’ …

I therefore beg leave to move — that henceforth prayers imploring the assistance of Heaven, and its blessing on our deliberations, be held in this Assembly every morning before we proceed to business.”

New Hampshire Governor John Langdon called for a Day of Fasting, February 21, 1786, to pray for the new government:

that he would rain down righteousness upon the earth, revive religion, and spread abroad the knowledge of the true God, the Saviour of man.”

The Federal Constitution needed nine States to ratify it in order for it to go into effect.

Eight States had ratified it, and New Hampshire was in line to be the ninth.

On February 13, 1788, New Hampshire convened the first session of its ratifying convention, but disagreements caused it to be adjourned on February 22, 1788.

“to be observed and kept as a day of fasting of humiliation and prayer.”

New Hampshire reconvened its ratifying convention in June of 1788.

Harvard President Rev. Samuel Langdon gave them an address titled “The Republic of the Israelites an example to the American States,” in which he stated:

Government … on republican principles, required laws; without which it must have degenerated immediately into … absolute monarchy …

Laws were founded on the plain immutable principles of reason, justice, and social virtue …

How unexampled was this quick progress of the Israelites, from abject slavery, ignorance, and almost total want of order, to a national establishment perfected in all its parts far beyond all other kingdoms and States!

From a mere mob, to a well regulated nation, under a government and laws far superior to what any other nation could boast!”

It was six hundred years after Moses before … Grecian republics received a very imperfect … code of laws from Lycurgus.

After Rev. Langdon’s address, New Hampshire’s delegates, on JUNE 21, 1788, voted to ratify the U.S. Constitution, being the ninth State to do so, thus putting the Constitution into effect.

“by his voice and example, he contributed more perhaps, than any other man to the favorable action of that body.”

“Acknowledging with grateful hearts the goodness of the Supreme Ruler of the Universe in affording the People of the United States in the Course of his Providence an Opportunity, deliberately & peaceably without fraud or surprise of entering into an explicit and solemn compact with each other

by assenting to & ratifying a new Constitution, in order to form a more perfect Union, establish justice, insure domestic tranquility, provide for the common defense, promote the general welfare and secure the Blessings of Liberty to themselves & their Posterity-

Do In the Name & behalf of the People of the State of New Hampshire assent to & ratify the said Constitution for the United States of America.”

Were the United “States” originally established Christian at the time they ratified the U.S. Constitution?

The answer can be seen by examining the acknowledgments of religion in the State Constitutions at the time those States debated and ratified the U.S. Constitution.

DELAWARE, the first State to ratify the U.S. Constitution, stated in its 1776 State Constitution:

‘I … profess faith in GOD THE FATHER, and in JESUS CHRIST His only Son, and in the HOLY GHOST, one God, blessed for evermore; and I do acknowledge the Holy Scriptures of the Old and New Testament to be given by Divine inspiration.'”

“Each member, before he takes his seat, shall … subscribe …

‘I do believe in one GOD, the Creator and Governor of the Universe, the Rewarder of the good and the Punisher of the wicked. And I do acknowledge the Scriptures of the Old and New Testament to be given by Divine Inspiration.'”

NEW JERSEY, the 3rd State to ratify the U.S. Constitution, stated in its 1776 State Constitution:

“All persons, professing a belief in the faith of any PROTESTANT sect, who shall demean themselves peaceably under the government … shall be capable of being elected.”

GEORGIA, the 4th State to ratify the U.S. Constitution, stated in its 1777 State Constitution:

“Representatives shall be chosen out of the residents in each county … and they shall be of the PROTESTANT religion.”

CONNECTICUT, the 5th State to ratify the U.S. Constitution, retained its 1662 Colonial Constitution, which was established PROTESTANT CONGREGATIONAL, till 1818:

“By the Providence of GOD … having from their ancestors derived a free and excellent Constitution … whereby the legislature depends on the free and annual election … The free fruition of such liberties and privileges as humanity, civility and CHRISTIANITY call for.”

“Any person … before he … execute the duties of his … office … [shall] subscribe … ‘I… declare, that I believe the CHRISTIAN religion, and have a firm persuasion of its truth’ …

The legislature shall … authorize the support and maintenance of public PROTESTANT teachers of piety, religion and morality.”

MARYLAND, the 7th State to ratify the U.S. Constitution, stated in its 1776 State Constitution:

“No other test … ought to be required, on admission to any office … than such oath of support and fidelity to this State … and a declaration of a belief in the CHRISTIAN religion.”

SOUTH CAROLINA, the 8th State to ratify the U.S. Constitution, stated in its 1778 State Constitution:

NEW HAMPSHIRE, the 9th State to ratify the U.S. Constitution, stated in its 1784 State Constitution:

“No person shall be capable of being elected … who is not of the PROTESTANT religion.”

VIRGINIA, the 10th State to ratify the U.S. Constitution, stated in its 1776 State Constitution, Bill of Rights, written with the help of James Madison and George Mason:

“It is the mutual duty of all to practice CHRISTIAN forbearance, love, and charity towards each other.”

NEW YORK, the 11th State to ratify the U.S. Constitution, stated in its 1777 State Constitution:

‘Laws of nature and of NATURE’S GOD … All men are created equal; that they are endowed by their CREATOR with certain unalienable rights … Appealing to the SUPREME JUDGE of the world … A firm reliance on the protection of DIVINE PROVIDENCE’ …

People of this State, ordain … the free exercise and enjoyment of religious profession and worship, without discrimination …

Provided, That the liberty of conscience, hereby granted, shall not be so construed as to excuse acts of licentiousness (sexuality immorality).”

NORTH CAROLINA, the 12th State to ratify the U.S. Constitution, stated in its 1776 State Constitution:

“No person, who shall deny the being of GOD or the truth of the PROTESTANT religion, or the Divine authority either of the Old or New Testaments, or who shall hold religious principles incompatible with the freedom and safety of the State, shall be capable of holding … office.”

RHODE ISLAND, the 13th State to ratify the U.S. Constitution, retained its 1663 Colonial Constitution till 1843, which stated:

“By the blessing of God … a full liberty in religious concernements … rightly grounded upon GOSPEL principles, will give the best and greatest security … in the true CHRISTIAN faith and worship of God … They may … defend themselves, in their just rights and liberties against all the enemies of the CHRISTIAN faith.”

“An establishment of religion, in terms of direct tax aid to Churches, was the situation in 9 of the 13 colonies on the eve of the American revolution.”

The Journal of the U.S. House recorded that on March 27, 1854, the 33rd Congress voted unanimously to print Rep. James Meacham’s report, which stated:

Down to the Revolution, every colony did sustain religion in some form. It was deemed peculiarly proper that the religion of liberty should be upheld by a free people …

Had the people, during the Revolution, had a suspicion of any attempt to war against Christianity, that Revolution would have been strangled in its cradle.”

WILLIAM J. FEDERER is a nationally known speaker, best-selling author, and president of Amerisearch, Inc., a publishing company dedicated to researching America’s noble heritage. He is also the owner of American Minute and the author of several books