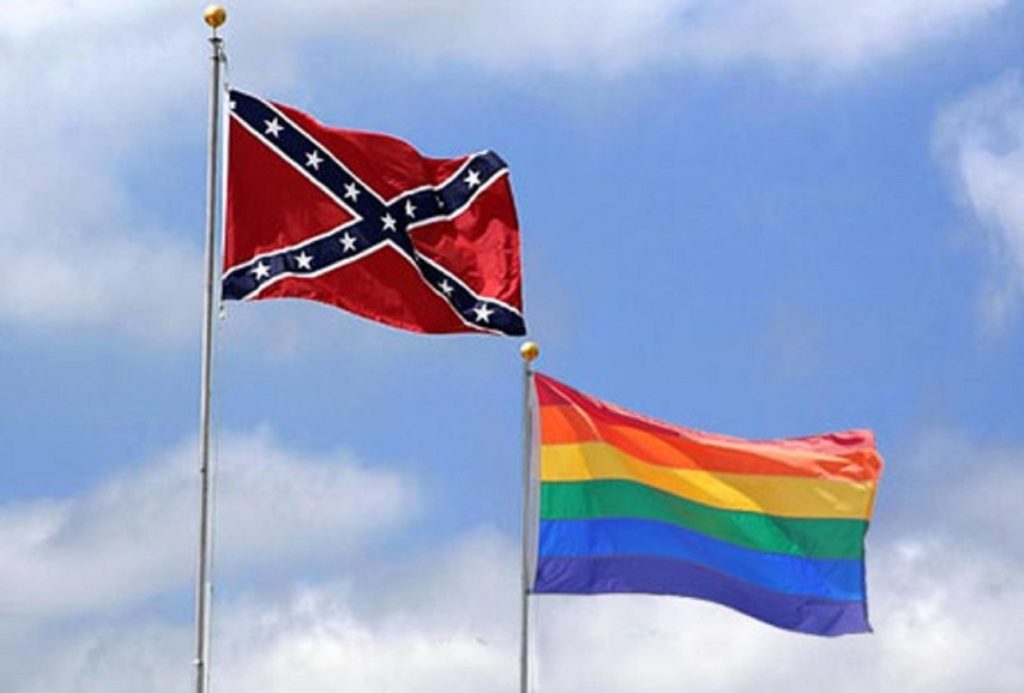 It seems that in my home state of Missouri, some High School Students don’t appreciate the LGBT flag being passed out in their PUBLIC school lunchroom.

They are right to protest.

What if they tried to pass out Bibles?

This would be national news broadcast on every liberal-controlled national network.

A pro-LGBT stunt at a Missouri high school backfired recently when students responded by hoisting the rebel flag.

A student at West Plains High School first handed out small pro-LGBT rainbow flags on Dec. 9, according to KY3.

It didn’t take long for other students to rebel.

The next day, a group of rebellious students raised a Confederate flag in the school’s lunchroom, the outlet reported.

This display appeared to divide the school right away.

“I was kind of mad because you can have your flag and that’s fine but it’s like they were using it as retaliation,” sophomore Rose Schilmoeller, who originally handed out the rainbow pride flags, told KY3.

Schilmoeller said she distributed nearly 60 of the pro-LGBT flags.

Although administrators apparently did nothing about the rainbow flags, the Confederate banner was confiscated and the situation investigated.

This is not the first time rainbow flags have caused a stir at American schools.

In 2017 parents raised hell at a school in Alabama.

Parents at a school in Alabama are demanding the removal of a rainbow flag put up in a classroom to celebrate LGBT tolerance.

The flag, at Auburn High School in Alabama, was made by members of a school club last week and put on display in a teacher’s classroom.

But angry parents have demanded that the symbol be torn down.

Hundreds have signed an online petition which compares the flag to a Confederate flag, widely seen as a racist symbol in support of slavery.

The petition says: “Flying of the Pride Flag can create a hostile and uncomfortable learning environment for students who come from families that do not support the LGBTQ+ community.”

It adds: “Subjecting or explicitly exposing students from diverse political backgrounds to political views differing from theirs can make students uncomfortable and distract them from learning the material assigned to them, preventing them from reaching their full potential.

“We feel that an expression of these views only drives a wedge between students with differing view points and can alienate students with unpopular political and/or religious views from the popular majority in the class, further deteriorating the classroom and learning environment. ”

It adds: “[We] would like for you to consider the uproar and chaos that would ensue were a teacher to hang for example a Confederate, Christian, or Heterosexual Flag in their classroom.

Public schools are supposed to be non-political.

At my daughter’s high school she started a club of Christian students.

The school can not endorse or sponsor the club in any way.

No meetings are allowed during school hours or on school grounds.

Rainbow flagsm however, seem to fly with their own set of rules.

Kudos to those who stand up against the LGBT agenda being shoved in our faces.

Fly those flags on your private property and stop trying to turn the whole country gay.

It’s OK that you are gay.

I won’t judge you for that.

But when you start shoving that stuff in my children’s faces, there will be problems.