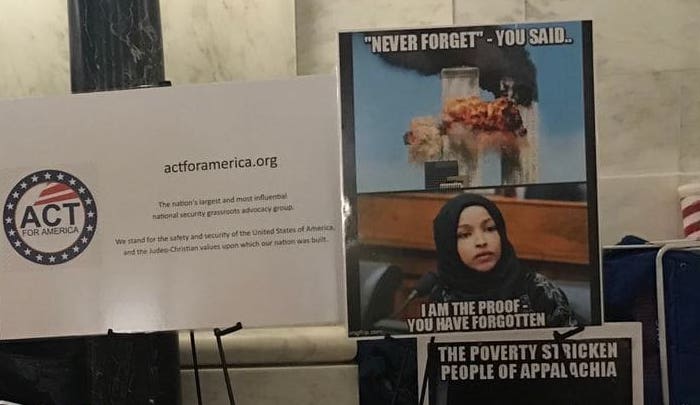 A poster juxtaposing a photo of Rep. Ilhan Omar with that of the 9/11 Twin Tower attacks complete with a provocative caption has led to a brawl among legislators in West Virginia, ending in one injury and one resignation.

The poster was put on display in the rotunda of the West Virginia statehouse as part of ‘GOP Day’ on Friday. It is unclear who was responsible for bringing the poster into the chamber, but it was the subject of immediate anger from Democratic lawmakers.

If the visual was not self-explanatory enough, the upper part of the collage featuring the 9/11 bombings was captioned: “‘Never forget’ – you said…” while the bottom one depicting Omar read: “I am the proof – you have forgotten.”

This poster is in your Capitol on a booth sponsored by @WVGOP “When someone shows you who they are, believe them” pic.twitter.com/4k566ztHWo

The poster sent tempers flying high in the chamber and led to some heated exchanges between the lawmakers, in which a doorkeeper was injured and had to be sent to hospital for a check-up.

Later, Del. Mike Caputo (D-Marion) admitted that he forced the door open, injuring the doorkeeper, when it was kept shut for the daily prayer and pledge of allegiance.

“Yeah, I kicked that door open. I’ll own it,” Caputo said, acknowledging that he “did and said some things” that he should not have.

While tensions were boiling over the poster, the House’s Republican Sergeant at Arms Anne Lieberman reportedly made an inflammatory remark about Muslims, fueling the Democratic outrage even further.

Del. Michael Angelucci (D-Marion) said that the sergeant, who is supposed to maintain order and decorum in the chamber, argued that “all Muslims were terrorists” during the commotion.

“The sergeant at arms of this body had enough nerve to say to us all Muslims are terrorists,” Angelucci said, as cited by local NBC affiliate WSAZ-TV.

The lawmaker denounced the remark as “beyond shameful” and built up a defense for Muslims by arguing that Christians did also kill people, but do not get branded “terrorists.”

Another Democrat, Del. Mike Pushkin (D-Kanawha) compared the attack on Omar to Nazi propaganda against Jews.

“In the early ’30s in Germany, you might see a similar poster about a different religion – and that’s one of the many reasons why that bothers me,” Pushkin said, as cited by West Virginia Public Broadcasting.

Republicans have distanced themselves from the message, but argued that it is protected by freedom of speech.

“Freedom of speech is very dear and near to me. Let’s hold it all within the House,” Del. Tom Bibby (R-Berkeley) said during a House session, urging the Republican speaker Roger Hanshaw to move ahead. Hanshaw denounced the incident and said an investigation had been launched into the brawl.

Lieberman denied that she made the remark, but later handed in a resignation letter, effective immediately.

Speculation has been rife as to who had put up the poster. WVPB reported that it might be the work of ACT for America, known as a pro-Trump and anti-Muslim advocacy group. But the organization, which has been openly critical of Omar, denied any involvement.

Meanwhile, Omar has taken to Twitter to accuse the Republican Party of inciting violence against her, while citing other instances when she was subjected to hate.

No wonder why I am on the “Hitlist” of a domestic terrorist and “Assassinate Ilhan Omar” is written on my local gas stations.

Look no further, the GOP's anti-Muslim display likening me to a terrorist rocks in state capitols and no one is condemning them! https://t.co/0ouCaloWqh

Omar has emerged as a divisive figure among Congress Democrats, primarily for her criticism of Israeli policy. Her comment about the Israeli lobby’s influence on Capitol Hill sparked a major backlash, with her fellow party members denouncing it as anti-Semitic. Under pressure by establishment Democrats, Omar eventually apologized, but this failed to quell the controversy, as many considered her apology half-hearted and others blamed her for caving in under pressure.