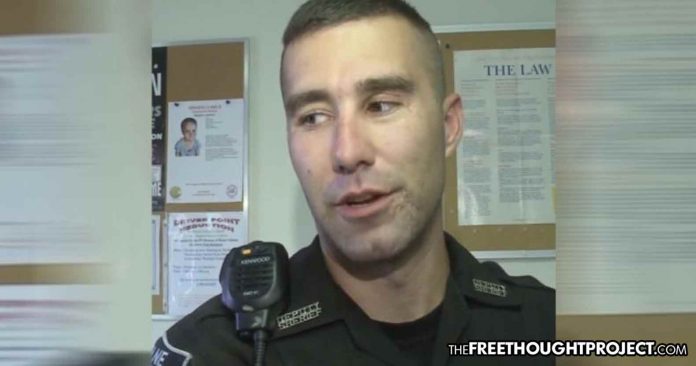 Charleston, WV — To those who frequent the Free Thought Project, you will know that positions of power often attract unscrupulous individuals, who seek out this power to give themselves an advantage that doesn’t come with being an average Joe. We see this from cops to politicians to priests who seek out these positions to prey on the weak or exploit their power for personal gain. One case out of West Virginia highlights this tendency of power corrupting quite well as a meth addict sought out the job of sheriff, won it, and was arrested on the second day on the job.

In 2017, the newly elected sheriff of Roane County, Bo Williams was arrested and charged with grand larceny. Williams was caught stealing methamphetamine from the evidence room for his personal consumption.

Before he was caught, Williams was only just elected in November of 2016 and his term had just started the following January. He was on the job for just two days before being arrested for breaking his oath to the constitution and betraying the citizens of Roane County. Despicable, indeed.

While he was waiting to start his job as sheriff, Williams was placed on paid leave at his job in the neighboring town of Spencer. He then resigned during this paid leave—a move many corrupt cops make as not to get in trouble. His paid leave was a result of this missing evidence.

Upon his arrest, Williams admitted to authorities that he’d been addicted to meth for over a year. He also admitted to stealing meth from a police case file and then consuming it.

Indeed, it is a sad situation. When public officials betray the citizens they are supposed to serve, this is the epitome of corruption.

In 2017, Williams was charged with grand larceny which is a felony punishable by up to 10 years in prison. However, he was sentenced to home confinement that March.

Although this story unfolded in 2017, Williams’ addiction is serious matter and illustrates an important point. Countless other individuals like him are battling a similar demon and they need help. However, it should serve as an example as to how ineffective and futile the war on drugs has become.

When the police state can’t even keep their own top officials from abusing meth, with the entire militarized anti-drug army at their disposal, it might be time to consider an alternative.

Cops kicking in doors and caging people for substances deemed illegal by the state is not only ineffective and futile, but it’s adding to the problem.

Because psychoactive drugs that humans have used for centuries have been banned by most modern governments, people turn to synthetic attempts at mimicking the high. Just as Spice (synthetic marijuana) has emerged to supposedly mimic cannabis, meth became sought after to mimic cocaine and when meth was banned, flakka came in to fill the void.

Cocaine and its synthetic counterpart, meth, sourced from the black market, which is laced with other unknown chemicals, can cause overdose and death.

Much of the dangers associated with cocaine would diminish if the drug were legalized and people had the freedom to put what they want into their own bodies. In a legal market, this extract of the coca leaf – which has been used for thousands of years by South Americans – would be produced in exact dosages known to the consumer, free from harmful synthetic chemicals.

If people could go to the store and buy a bit of cocaine, as they can buy alcohol, we could expect the demand for meth to be reduced or non-existent.

Prohibition does nothing to curb the supply or the demand of drugs, but it enriches the corporatocracy, corrupts those in power like Williams, and gives the State immense power over our personal freedom. It creates a void in the demands for drugs and those voids are filled with even more dangerous substances such as meth.

We should have learned the lesson that prohibition only causes greater harm, during the miserable attempt at alcohol prohibition from 1920 to 1933. When government attempted to ban alcohol, its production and distribution shifted to the black market, and people suffered and died.

Reports of blindness and death were common as people attempted to make their own alcohol but failed to realize the dangerous by-products that can be produced. Bootleg alcohol fueled violent criminal gangs exploiting prohibition for financial gain. We are seeing the exact same scenario play out today and the Roane County sheriff is evidence of this.

There will always be demand for psychoactive drugs, and there will always be supply to meet this demand. If government attempts to ban substances, making it a little harder for some people to get things like cocaine, they will synthesize some other, more dangerous substance.

There’s a saying about doing something over and over again and expecting different results, being the mark of insanity. Prohibition is the perfect demonstration of this.

The time to end the drug war is now.