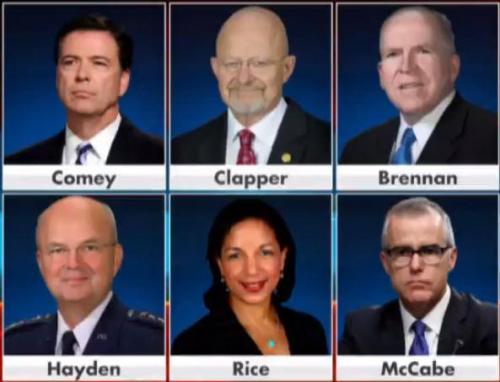 Seriously, some things are just common sense, but not in DC government, no matter the administration. It’s being reported that President Donald Trump may revoke the security clearances of former CIA Director John Brennan and head of former head of national intelligence James Clapper, as well as former FBI Director James Comey, Deputy Director Andrew McCabe, and former US Ambassador to the United Nations Susan Rice, but don’t count on it.

“Not only is the President looking to take away Brennan’s security clearance, he’s also looking into the clearances of Comey, Clapper, Hayden, Rice and McCabe,” said Sanders, reading from a prepared statement, “because they’ve politicized, and in some cases, monetized their public service and security clearances. Making baseless accusations of improper contact with Russia or being influenced by Russia, against the President, is extremely inappropriate.”

“The fact that people with security clearances are making these baseless charges provides inappropriate legitimacy to accusations with zero evidence.”

So, why are we playing this little game then, Mrs. Sanders? Why continue down this road and allow these people security clearance when they are not in the service of the people? Not that they ever really were in the first place.

She claims “because in some cases they have monetized their security clearances.”

I guess I don’t get it. Whether they have monetized those clearances or not is rather irrelevant. They should not have them once they are no longer in the office. In the private sector, when one leave a job, they turn in keys, access control cards and passwords they used in the service of whatever business they were employed. Government should work in a similar fashion, but it appears to me that security is not what this is about. It’s about having the means for diversion from what is actually going on in our government.

If security was an issue, these people would have lost those security clearances when they left office.

Senator Rand Paul tweeted, “Is John Brennan monetizing his security clearance? Is John Brennan making millions of dollars divulging secrets to the mainstream media with his attacks on @realDonaldTrump ?”

Is John Brennan monetizing his security clearance? Is John Brennan making millions of dollars divulging secrets to the mainstream media with his attacks on @realDonaldTrump ?

Of course, Paul is referencing Brennan’s tweet from last week in which he used the Twitter platform to accuse President Trump of what he is actually guilty when he tweeted, “Donald Trump’s press conference performance in Helsinki rises to & exceeds the threshold of “high crimes & misdemeanors.” It was nothing short of treasonous. Not only were Trump’s comments imbecilic, he is wholly in the pocket of Putin. Republican Patriots: Where are you???”

Of course, I could answer the question and say they are in the same place they were when treasonous Brennan and Obama were in office, aiding and abetting America’s enemies.

Still, Paul is right. Both Clapper and Brennan are using their former positions and security clearance to make money as “contributors” to fake news networks CNN and MSNBC.

I think this is just a very, very petty thing to do. And that’s about all I will say about it.

Well, typically, there would be a formal notification, not by this means, that clearance is being suspended, for example, you’re under investigation because of allegations of something that would merit revocation or at least suspension.

There is a formal process for doing this, but I guess, legally, the president has that prerogative. He can suspend or revoke clearances as he sees fit. And if he chooses to do it for political reasons, well, that’s — I think that’s a terrible precedent and it’s a very sad commentary. And it’s an abuse of the system.

Abuse of the system, Mr. Clapper? Hello pot, this is kettle. My goodness the hypocrisy from these people is over the top.

Look, it doesn’t just stop with these people. Why do former Secretary of State and criminal Hillary Clinton and many in her staff still have a security clearance?

These people are known criminals and traitors to the American people. It is a slap in the face of every red-blooded American that they are allowed to breathe, let alone get on air and pontificate their propaganda and have security clearance. It’s time justice was brought down on the heads of these liars, conspirators and criminals.

If this continues to go on these people continue to have security clearance, there is really only one person to blame for it. That is a reality that people must face.