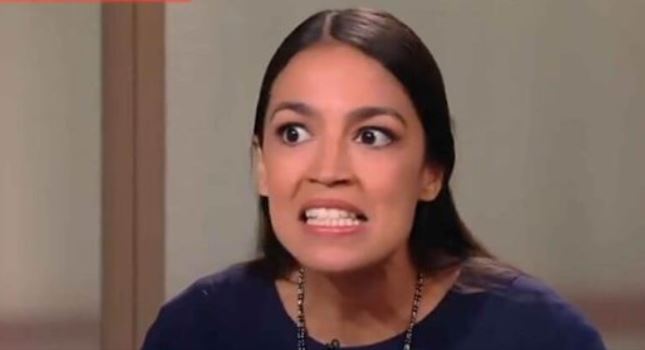 But that shouldn’t surprise anyone. Recall that this woman has a bachelor’s degree in “economics,” yet she’s a raging socialist who supports a Communist sympathizer for president.

In the ad, Ocasio-Cortez can be heard telling crowds, “It’s time that we become the party of FDR again! It’s time for us to become the party of the Civil Rights Act again.” She also said Democrats should become “the anti-war party again” and the “party of peace and prosperity.”

I want to be the party of the New Deal again.

The party of the Civil Rights Act,
the one that electrified this nation and fights for all people.

For that, many would call us radical.
But we aren’t “pushing the party left,”
we are bringing the party home.pic.twitter.com/wLeDaxCHkZ

Someone needs to get this chick a history book — preferably one that was written a few decades ago, before the primary education system was taken over by Left-wing propagandists.

We know that the Garbage Party’s “mainstream” media isn’t going to fact-check her, so we’ll just have to do it.

First of all, FDR — President Franklin Delano Roosevelt for the Left-wing knowledge-challenged — was the guy who tossed Japanese-Americans in internment camps during World War II. Mind you, they were actual internment camps, not at all like the much more human detainment facilities that ICE uses, unbeknownst to this former bartender.

Japanese internment camps were established during World War II by President Franklin Roosevelt through his Executive Order 9066. From 1942 to 1945, it was the policy of the U.S. government that people of Japanese descent would be interred in isolated camps. Enacted in reaction to Pearl Harbor and the ensuing war, the Japanese internment camps are now considered one of the most atrocious violations of American civil rights in the 20th century.

FDR, you could say, also got American into World War II via his foreign policy with Europe and Japan. Consider these summary statements by George Victor, by no means a Roosevelt hater, in his well documented book The Pearl Harbor Myth. You can read about this here if you’d like.

FDR’s economic policies — a Leftist of the day — also were responsible for prolonging the worst depression in U.S. history, chief among the “The New Deal.” Economists and historians agree that it actually prolonged the suffering and, according to one observer of the day, “made the trusts richer” and “the people poorer.” In other words, it helped the big financial institutions of the day (“the big banks”), which AOC and friends claim to hate.

Barack Obama was channeling Roosevelt when the former got a Democrat Congress to pass his trillion-dollar “stimulus” plan at the beginning of his first term, when the U.S. economy was in the throes of a major recession. It did nothing to boost employment and the economy.

Similarly, FDR’s New Deal massive government spending plan built a lot of infrastructure but it did nothing to curtail the Great Depression. That ended when the U.S. war machine cranked up to fight World War II (because the free market always trumps government spending projects in terms of creating jobs and wealth).

So there’s that. How about the Civil Rights Act?

Yeah, most Democrats opposed this legislation and filibustered it. Jim Hoft at The Gateway Pundit noted that the “hero” of the time was a Republican senator:

For the first time in its history, cloture was invoked on a civil rights bill, ending a record-breaking filibuster by Democrats that had consumed fifty-seven working days. The hero of the hour was minority leader Senator Everett McKinley Dirksen (R-Ill.).

In fact, in terms of percentages of available lawmakers, more Republicans voted for the Civil Rights Act than Democrats.

And since we’re reviewing Democrat history so precious to the knowledge-challenged Ocasio-Cortez, in 1920 it was the Republican Party that beat back Democrats’ “war on women” in the early part of the 20th century to ensure passage of the 19th Amendment, giving women the right to vote (which Republicans actually supported as early as 1854).

And let’s not forget it was the Democrat Party that started, promulgated, and defended the KKK — as Democratic Gov. Ralph Northam of Virginia reminded us recently.

The Garbage Party’s propaganda media won’t fact-check any Democrat, least of all Bernie Sanders or Alexandria Ocasio-Cortez. So that task is left to the proper media. But unfortunately, too many Americans will be lured by the promises of great gifts of taxpayer-funded goodies to care much about how monumentally awful and destructive the “party of FDR” has been to America.