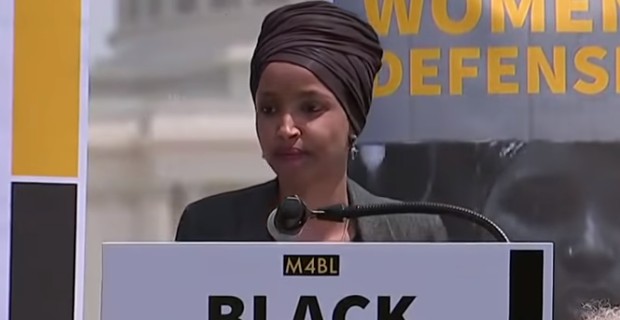 Editor’s Note: Does Ilhan Omar hate Trump more than she hates Jews? That is the only explanation that works here. Suddenly Ilhan Omar, who is a documented Jew-Hater, is defending the Jewish people against their real adversary — Donald Trump. This is too funny. Does she think anyone is buying this? –Dean Garrison

Rep. Ilhan Omar asserted “This is not going to be the country of white people” during a rally in DC Tuesday.

“At this moment, the occupant of the White House and his allies are doing everything that they can to distance themselves and misinform the public from the monsters that they created that is [sic] terrorizing the Jewish community and the Muslim community,” the Congresswoman told the crowd, suggesting that the recent synagogue shootings were Trump’s fault despite both shooters explicitly expressing their opposition to Trump.

Omar went on to emphasize that she was a “refugee” and an “immigrant” from Somalia, which she said Trump would call a ‘shithole country’.

And who could argue with her? With its rampant violence, corruption and oppression of women, Somalia is an ideal destination, which is presumably why its tourist industry is thriving.

Asserting that America “was founded on the history of Native American genocide, on the backs of black slaves,” she went on to brazenly state, “This is not going to be the country of white people.”

Imagine if a white Republican had made a speech in which he or she asserted, “This is not going to be the country of black people.”

Their political career would be finished and their reputation would tainted for the rest of their life.

But since the last acceptable form of racism is racism against white people, Omar’s statement is a mere footnote.

Omar is still whining about Trump drawing attention to her absurd statement that 9/11 was “some people (who) did something” as if she is the victim.

For weeks, the media has helped Omar push the narrative that criticism of her is tantamount to inciting violence and far worse than her original ludicrous statement.

During the rally, her supporters chanted “hands off Ilhan,” attempting to further the idea that she should be immune from criticism just because she wears and Islamic headscarf and claims victimhood.