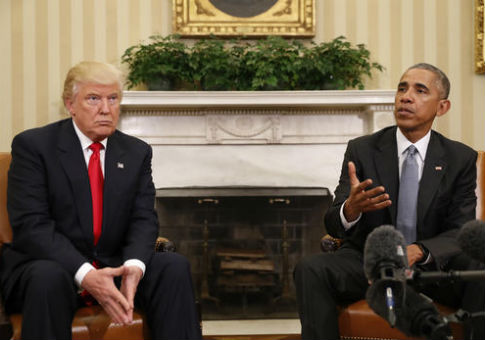 Why in the world would Donald Trump offer Barack Obama 50 MILLION Dollars?

I recently wrote about a Senate Leader in Kenya that says Barack Obama was born there.

Did Trump have similar suspicions?

More on that in a moment. And yes, that is the reason Trump offered Obama that 50 Million.

While Obama was still in office there was a lot of controversy surrounding a photo released by Breitbart. The photo was from a promotional guide published to feature some authors from Acton & Dystel. Obama was a former client. According to Snopes, this was simply a printing/editing error. Let’s read a little of what Snopes had to say on this matter:

The editor of the biographical text about Barack Obama which was included in the booklet maintained that the mention of Kenya was an error on her part and was not based on any information provided to her by Obama himself:

Miriam Goderich edited the text of the bio; she is now a partner at the Dystel & Goderich agency, which lists Obama as one of its current clients.

“You’re undoubtedly aware of the brouhaha stirred up by Breitbart about the erroneous statement in a client list Acton & Dystel published in 1991 (for circulation within the publishing industry only) that Barack Obama was born in Kenya. This was nothing more than a fact checking error by me — an agency assistant at the time,” Goderich wrote. “There was never any information given to us by Obama in any of his correspondence or other communications suggesting in any way that he was born in Kenya and not Hawaii. I hope you can communicate to your readers that this was a simple mistake and nothing more.”

Please go back and read the sentence that I emphasized, “Miriam Goderich edited the text of the bio; she is now a partner at the Dystel & Goderich agency, which lists Obama as one of its current clients.”

Kudos to Snopes for including that quote.

Why would Barack Obama remain a client when this woman caused him so much grief?

Goderich does claim that it was all an honest mistake.

However, Donald Trump didn’t think so back in 2012. He offered Barack Obama $5 million for his college records so he could see what they indicated about Obama’s nationality.

Then in 2014 he dropped a bombshell at The National Press Club. Obama did not respond to his first offer, so he raised that offer to $50 Million paid to Obama’s favorite charity. Here’s a video:

50 Million bucks can do a lot of community organizing. So maybe Trump was off base but there is no doubt Obama was selfish.

Can I give $50 million to your favorite charity? Maybe he was too busy at the time.

Maybe Trump was and still is crazy, but he seems to be with plenty of company when it comes to the origin of Barack Obama. Here are a few examples:

There is a mile long list of these conspiracies. It’s all fake news I tell ya. Thank God we have the big brother media to censor this garbage. 😉

Why the hell does it matter where Obama was born anyway?

Is being born in Kenya a sin?

Some official in Hawaii signed a sworn affidavit that no long form Hawaii birth certificate ever existed. And it was probably just a coincidence that the woman who issued the birth certificate, that this clown says never existed, ended up dying in a plane crash.

But in case he was right, what is wrong with being born in Kenya?

Well to be president you must be a natural born citizen. Some believe that Barack Obama never met that requirement.

In fact, some even believe that congress knew it and covered for him.

I’m a little like Markwayne Mullin (Representative from Oklahoma). Maybe he was born in Kenya, but nothing was ever done about it so why should I give a sh*t?

I’ll tell you why.

When people stop “giving a sh*t” about our laws, bad things can and will happen.

Look at the 8 years of hell we experienced under Obama.

I hope he was born in Kenya because I’d hate to think a real American would have caused so much destruction.

One of the reasons I voted for Donald Trump is that he gave a sh*t when very few did.

He offered Obama $50 Million to learn the truth. Obama was too busy “being transparent” at the time to reply.