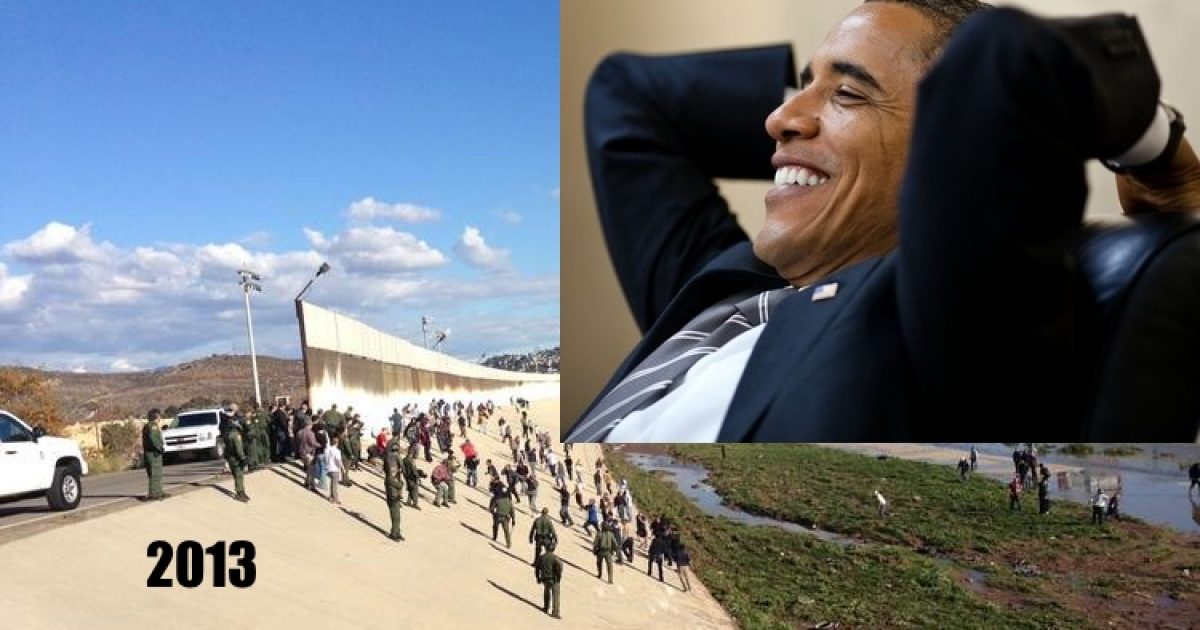 Over the weekend, US Customs and Border Patrol agents shot tear gas into a group of migrant invaders as they attempted to cross the US/Mexico border and used women and children as shields ahead of them. This attempted invasion occurred at the Ysidro Land Port of Entry between Tijuana and San Diego, but how many of you heard about a similar attempt under the usurpation of Barack Hussein Obama Soetoro Sobarkah in 2013 where CBP agents used pepper spray on about 100 migrants who were attempting to cross the very same border point!

It was reported on November 25, 2013 by The San Diego Union-Tribune:

A group of about 100 people trying to illegally cross the border Sunday near the San Ysidro port of entry threw rocks and bottles at U.S. Border Patrol agents, who responded by using pepper spray and other means to force the crowd back into Mexico, federal officials said.

The incident occurred about a quarter-mile west of the San Ysidro border crossing in the Tijuana River channel. No one was seriously injured, no shots were fired and no arrests were made, said Mary Beth Caston, a Border Patrol spokeswoman.

The group first approached a lone agent stationed about 1/8 of a mile north of the border. They ignored his commands to stop, so he fired pepper balls to try to stop them and protect himself, Caston said.

As the crowd kept advancing and throwing rocks and bottles, she said, more agents came to the scene and used other “intermediate use-of-force devices” to push back the group. The agents also contacted Mexican law enforcement.

Now, where were all the bleeding hearts out there who support the migrant invaders who want to illegally cross over the US border? Where was the media then? What about the political activists, Socialists and Communists in our government? Barely a peep about it.

Fast forward nearly 5 years to the day to the same border crossing point and now the invaders are a larger crowd who have been emboldened by the likes of those in the Obama administration. Yet, CBP acted accordingly, dispersing the people with tear gas. However, now that is all over the tv and in the news and on the lips of politicians who want to undermine the Constitution and the law.

It’s because Obama was considered to be the Messiah for some of these people and being the Marxist usurper he was, he could do no wrong. But you probably didn’t see tweets like this one against Obama, did you?

As a citizen of the United States,
I hereby condemn the actions taken today at the U.S. border in San Ysidro, the firing of tear gas by Border Patrol at migrant women & children.

Mentally ill lesbian Sally Kohn tweeted out, “If reports of a few migrants throwing rocks at the border are true, please wonder at whether a few rocks are really a threat to the heavily armed, militarized US border patrol: ROCKS AREN’T THREATS. THEY’RE JUST THE EXCUSE FOR TRUMP TO RESPOND WITH DEADLY FORCE.”

Sally, deadly force wasn’t used. It was tear gas. Had it been fired point blank at someone’s face, you might consider it deadly force, but this was not that.

Apparently, Kohn is as ignorant of what deadly force is as she is about how the Constitution works when impeachment takes place.

With misunderstood civics like Khon articulates, I’m sure we’ll be seeing a lot of Alexandria Ocasio-Cortez alongside her to discuss the “three chambers of government,” or maybe the Holocaust.