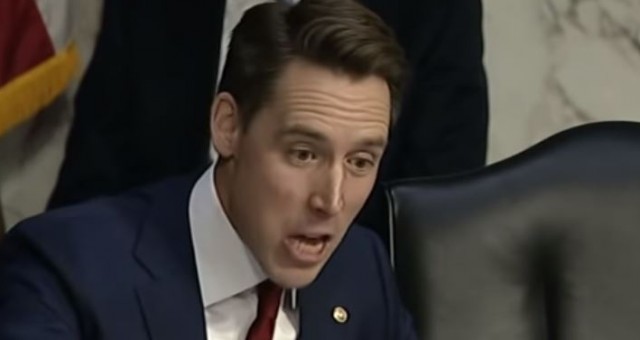 (TNS) The former Republican attorney general for the great state of Missouri (my home state) continues to prove worthy of the citizens who sent him to Washington, D.C., to replace Leftist Sen. Claire McCaskill last year.

Republicans made a great accounting of themselves Wednesday during DoJ Inspector General Michael Horowitz’s testimony before the Senate Judiciary Committee, which garbage ‘news’ networks CNN and MSNBC practically boycotted because Democrats weren’t running the show.

He noted further that foreign governments historically have attempted to meddle, Russia being first and foremost among them (does the “Cold War” ring a bell?).

But for the first time in 2016, our own government did some meddling as well. That would be the Obama administration, and on behalf of Hillary Clinton, who also meddled along with the DNC.

“Which is worse, is it worse to have a foreign government trying to meddle in our elections or is it worse to have our own government meddling in the election? Because that’s exactly what this report shows,” Hawley said in reference to Horowitz’s report on the FBI’s many abuses of the FISA court to obtain surveillance warrants on the Trump campaign.

"Because that's exactly what this report shows." pic.twitter.com/sSrvDjAXpk

“There’s one actor here who hasn’t gotten the credit that they collectively deserve. And that’s the Democrat National Committee. I just think, you know, I’ve heard my friends on the other side of the aisle complain about Hillary Clinton’s campaign, and how ineffective it was, the DNC didn’t do a good job in 2016. I beg to differ,” Hawley exclaimed, banging the table for emphasis.

“This is the most incredible, the DNC pays for the Steele Dossier, solicits the Steele Dossier, and then gets the Federal Bureau of Investigation, to go get FISA warrants, surveil an American citizen, surveil a presidential campaign, all on the basis of this manufactured garbage that they paid for. I mean, that’s extraordinary. That has got to be a first time in history,” he added.

It sure is. And illegal. Which is why supporters of President Donald Trump have been waiting anxiously for some payback in the form of indictments.

We continue to believe they are coming, though.

Meantime, it was great to see someone actually point out plainly that the Obama regime, along with the Clinton campaign, actively did what they have long accused Russia and Trump of doing: Meddle in the 2016 election.