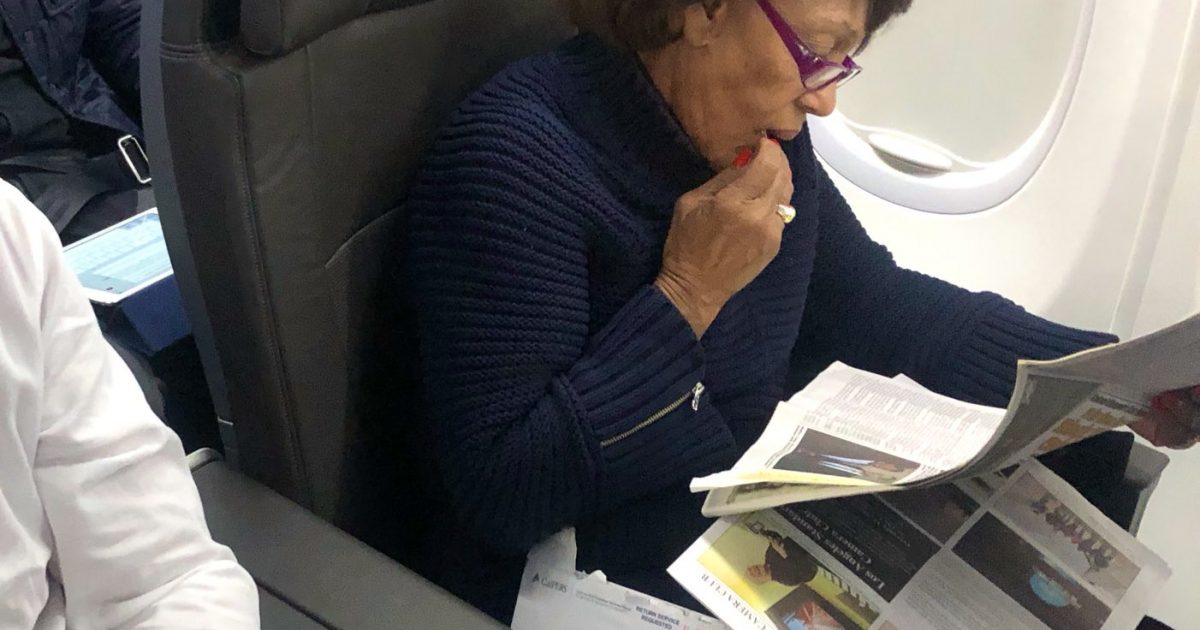 There’s nothing more elitist than a Socialist California Representative, who apparently doesn’t even live in the district she represents, flying in first-class reading about herself while people go without pay due to her self absorption. And we have the pictures to prove it.

Despite the government shutdown, which has furloughed hundreds of thousands of federal employees (a lot of which are “non-essential”), California Representative Socialist Maxine Waters (D) was caught reading a newspaper article about herself (Narcissism, it isn’t just for Obama anymore) by The Daily Caller’s Benny Johnson.

“HEY LOOK – It’s Maxine Waters sitting in First Class on my flight to DC during the government shutdown.

This is the only photo I could snap since she’s in the first row & I’m literally in the last row.

(She’s reading a newspaper article about herself – lol)”

HEY LOOK – It’s Maxine Waters sitting in First Class on my flight to DC during the government shutdown.

This is the only photo I could snap since she’s in the first row & I’m literally in the last row.

(She’s reading a newspaper article about herself – lol)
✈️ 💺 🙏🏻 pic.twitter.com/lXcAidRLPY

Of course, Johnson pictured himself in the last row.

LAST ROW – SAVE ME

That just means he is last to die if the plane goes down.

While Waters claims she speaks for the people and has gone absolutely insane at the notion of impeaching President Donald Trump with no actual charges against him, she doesn’t seem to mind that some people in DC and other areas, including the one she allegedly “represents,” are going without pay.

Nope, she is just content with first class and reading about herself.

However, in front of the media cameras, she is a bleeding heart for furloughed employees.

“Today is day 26 of the Trump Shutdown,” Waters said on Jan. 16, 2019. “Federal workers missed their first paycheck last Friday, and still there is no end in sight to this cruel and senseless shutdown. It is truly shameful that President Trump and Congressional Republicans are so desperate to secure taxpayer funding for an irrational border wall that they’re willing to harm hard-working Americans and jeopardize national security by shutting down the federal government.

“These dedicated public servants go to work every day for the American people. These hardworking people keep us safe. They should not have to worry about how they will keep a roof over their heads and feed their families.

“My congressional district is home to Los Angeles International Airport (LAX), the sixth busiest airport in the world and the third busiest in the United States. In 2017, more than 84 million passengers used LAX. All of these passengers depend upon the TSA’s airport security screeners and the FAA’s air traffic controllers to get them to their destinations safely.

“The Trump shutdown doesn’t just affect government employees. An economic study in 2011 reported that operations at LAX generated 294,400 jobs in Los Angeles County with labor income of $13.6 billion and economic output of more than $39.7 billion. The economic vitality of Los Angeles County depends upon the safety and security of LAX and the TSA and FAA employees who work there.

“TSA employees are dedicated public servants who risk their lives every day to keep our nation’s airports and travelers safe. On Nov. 1, 2013, a Transportation Security Officer named Gerardo Hernandez was tragically killed in the line of duty during an active shooter incident at LAX. He was the first TSA employee to be killed in the line of duty, and my colleagues and I passed the bipartisan Gerardo Hernandez Airport Security Act of 2015 in his honor. Our president has forgotten the critical role these American patriots serve in our national security.

“Today, at LAX and airports throughout the country, Transportation Security Officers like Gerardo Hernandez are working without pay! The Trump Shutdown is endangering public safety, national security, and the livelihoods of the people whose job it is to protect us.

“American families and workers should not be punished because of a policy disagreement in Washington, D.C. Donald Trump should stop holding the safety, security, and paychecks of workers in my district, and throughout the country, hostage. He must re-open the government immediately.”

Now frankly, I wish the whole lot of the unconstitutional TSA Gestapo were unemployed, but this is the height of hypocrisy.

Just remember this, Maxine Waters supporters, when she is up for re-election. She cares more about how she looks in public and her own creature comforts than she does your livelihood.