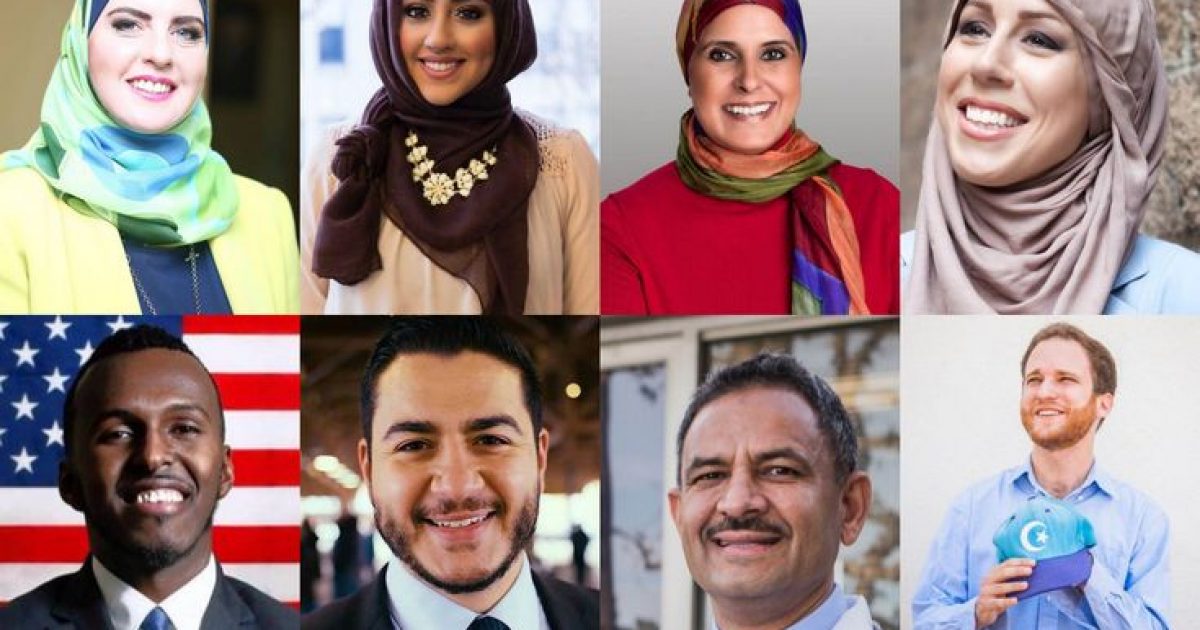 “Getting into positions of power is all part of the muslims [sic] goal to enforce sharia law. Muslims do not want to assimilate, they want to take over. They do not want to be your friend, they want to kill you. There is no such thing as a moderate muslim and there never will be. If we do not speak out, educate people and vote against these people, this will no longer be America.” –Deplorable Kel

Right on cue, and as I have scripturally warned (Deuteronomy 28:43, 63) over and over again, while men have slept, the enemy sows tares and tares they are sowing (Matthew 13:25).

America, the Republicans and the Democrats are not the answer to America’s dilemmas. They are, in fact, the reason for your dilemmas. These two groups have been created to divide the American people, and they are accomplishing their mission (Mark 3:25).

In fact, on July 29th of this year, the Republicans (the best that you have, or so you have been told) caved on return to open borders immigration policy of Obama.

Please do not act surprised, while men are lavishing their praise and approbation upon Donald Trump for ‘Making America Great Again,” do yourself a service and keep in mind that Donald signed the very omnibus bill in March of 2018 that Barack Hussein Obama contrived and teed up back in December of 2015.

Also remember, America’s said representatives are the very ones alluring these Muslims, who mean to overthrow American government, to come into this country on the dime of the American taxpayers.

Public Servants Working to Hand Over the US to Illegal Immigrants are Personally Responsible for their Crimes!

That aside, and without belaboring the point, here is a list of Muslims that are attempting to get into representative positions in your government.

Abdulrahman Mohamed El-Sayed AKA Abdul El-Sayed is a muslim man whose parents are immigrants from Egypt. Some people call him the “next Obama” or “Obama 2.0.” Some say he has been groomed by George Soros. On his social media accounts he has photos of himself with Bill Clinton, Maxine Waters, and Linda Sarsour. Elizabeth Warren is campaigning for him. He is running for Governor of Michigan. The primary election is August 7, 2018. UPDATE: Abdul lost the democratic primary.

Asif Mahmood is a muslim immigrant from Pakistan. He is a long time Clinton contributor. He and his wife have held fundraisers at their home for Clinton, which Hillary Clinton and Huma Abedin attended. Mahmood is anti Trump and calls himself a “triple threat” to President Trump. He openly says he will go against President Trump. His name is found on Wikileaks. He and Podesta have emailed each other. He is running for lieutenant governor of California. UPDATE: Asif Mahmood has dropped out of the race for lieutenant governor and is now running to be California’s next Insurance Commissioner. The primary election is June 5th. UPDATE: Mahmood lost the primary election.

Deedra Hill Abboud is a muslim convert. She is married to Ali Abboud, an immigrant from Iraq. She has worked with terror linked groups CAIR & MAS. Deedra’s campaign slogan is “United, We Rise.” She is running for U.S. Senate in Arizona. The primary election is on Aug. 28th 2018 and general election is on Nov. 6th 2018.

Kayvan Khalatbari is an Iranian-American. He is pro drugs, pro sanctuary cities, anti police and anti Trump. He has photos of himself on social media, licking the American Flag. He is running for Mayor of Denver Colorado in 2019. *Edit: Kayvan has stated that he is not muslim. He is indeed anti-American, though.

Deeqo Jibril is a refugee from Somalia. She is anti Trump and anti Travel ban. She is founder of the Somali Community & Cultural Association. She was also a community outreach organizer for the campaign of Elizabeth Warren in 2012. She is running for District 7 representative on the Boston City Council in Massachusetts. UPDATE: Jibril was defeated in the primary election on September 26, 2017.

Asima Azam is a muslim woman and daughter of immigrants from Pakistan. She is married to Dr. Moeed Azam. She is running for District 3 Commissioner in the City of Orlando, Florida. UPDATE: Azam was defeated in the general election on November 7, 2017.

Bushra Amiwala is a 19 year old muslim woman whose parents immigrated from Pakistan. She is running for County Board Commissioner, Cook County, Illinois, District 13. UPDATE: Amiwala was defeated in the primary election.

Regina Mustafa is the founder of Community Interfaith Dialogue on Islam of Rochester, MN. She is a muslim woman running for the 1st Congressional District, Minnesota. UPDATE: Mustafa dropped out of the race in October 2017 and is now running for Mayor in Rochester Minnesota. The primary election takes place Aug. 14, 2018 and general election Nov. 6, 2018.

Zahra Suratwala is a muslim woman who is running for DuPage County Board in District 1. The primary is March 20, 2018. UPDATE: Zahra won the democratic primary election. General election is November 6, 2018.

Fayrouz Saad is seeking election to the U.S. House to represent the 11th Congressional District of Michigan. According to Saad’swebsite, Fayrouz is an economic development advocate, a community organizer, and a public servant who worked for the Obama administration and most recently served Detroit Mayor Mike Duggan. The primary election takes place on August 7, 2018. UPDATE: Saad lost the democratic primary election.

Amir Malik is running for Minnesota State Representative for 37B. Malik is the Civil Rights Director for CAIR-MN. The primary election is Aug. 14th, 2018.

Dilara Sayeed is a candidate for District 5 of the Illinois House of Representatives. The primary election is being held on March 20, 2018. The general election will take place on November 6, 2018. UPDATE: Sayeed was defeated in the primary election.

Nadia Hashimi is a 2018 Democratic candidate seeking election to the U.S. House to represent the 6th Congressional District of Maryland.The primary election takes place on June 26, 2018.

Johnny Martin is a muslim convert running for office for Arizona house of representatives for district 25. Martin is a 24 yr old activist. Martin has volunteered and advocated for DACA and Black Lives Matters. The primary election takes place on August 28, 2018 and the general election will be held on November 6, 2018.

Jesse Sbaih is an anti Trump muslim running for U.S. Senate in Nevada. Sbaih is an immigrant from Jordan. Sbaih compares President Trump to Hitler, and his supporters to the KKK. On Sbaih’s social media pages he makes it clear he is anti Republican. He claims that Republicans and the Trump administration have “no sense of what American values of compassion, empathy, or community, truly are.” He claims that Republicans and the Trump administration are dividing people “US vs Them.” The Primary election is June 12, 2018. UPDATE: Jesse lost the primary election.

Rashida Tlaib is running for Congress in Michigan’s 13th District. Tlaib is a muslim woman and the child of Palestinian immigrants. UPDATE:Rashida won the democratic primary election. There are no republican candidate running, so Rashida will not have to face anyone in the general election. She will be the U.S. first muslim Congresswoman.

City of Bell Councilmember and former Mayor Ali Saleh is now running for Ca State Senate. Saleh is a muslim whose parents emigrated from Lebanon. Saleh is an active member of his local mosque. UPDATE: Ali lost the primary election. He is running again in 2020.

Ammar Campa-Najjar, a muslim man, is a candidate for US Representative for California District 50. UPDATE: Ammar won the primary election. *Edit: Ammar replied to my tweet about him and stated that he is not muslim. So I did some more research. He may not be muslim but his fathers side of the family is indeed muslim and many articles claim that Ammar’s grandfather was a muslim terrorist. When I asked Ammar about this, he refused to answer.

Omar Vaid is running for US Representative for New York District 11. Vaid is the Muslim son of immigrants from India. He is anti President Trump and anti Travel ban.

Marcus Goodwin is running for a seat on Washington DC’s city council.

Kia Hamadanchy is running for US Representative for California District 45. – Kia lost the primary election.

Omar Siddiqui is running for US Representative for California District 48. – Omar was defeated in the primary election.

Congressman Keith Ellison will not seek reelection to Congress in 2018, instead he will run for Minnesota Attorney General.

Aisha Yaqoob is running to represent the 97th House District in the Georgia House of Representatives. Aisha won the Democratic primary in May.

Saima Farooqui is a muslim woman running for Florida State Representative for District 96.

Ilhan Omar is a Democratic member of the Minnesota House of Representatives, representing District 60B. She was first elected in 2016. Omar was the first Somali muslim legislator elected to office in the United States. Omar recently announced that she will be seeking election to the U.S. House to represent the 5th Congressional District of Minnesota.

Jamal Abdulahi is a Somali refugee seeking election to the U.S. House to represent the 5th Congressional District of Minnesota.

Tahirah Amatul-Wadud is a muslim woman who is running for US Representative for Massachusetts District 1.

Abraham Aiyash is running for State Senate in Michigan.

Fardousa Jama is running for a city council seat in Mankato, Minnesota

Abdi Warsame is the Ward 6 representative on the Minneapolis City Council in Minnesota. He is up for reelection.

Siad Ali is the District 3 member of the Minneapolis Board of Education in Minnesota. He is up for reelection

Now, I know some of you are going to say “Big deal. They wont win.” So let me list muslims who have ALREADY won in previous elections in the United States:

Ilhan Omar is a somali refugee and Democratic member of the Minnesota House of Representatives, representing District 60B. She was first elected to the chamber in 2016.

Nadeem Mazen was the first Muslim ever elected to a Massachusetts governing body and the City Council’s youngest member.

Amir Omar is a muslim man and the City Councilman for Place 7 in Richardson, Texas.

And let’s not forget, we had a Muslim in the White House for 8 years!