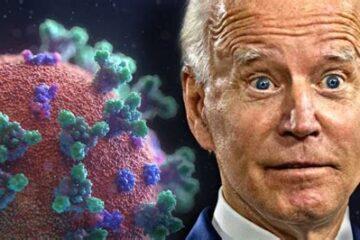 In a recent White House press conference, Deputy Press Secretary Karine Jean-Pierre said, regarding injections for domestic air travel, “We say this all the time – everything is on the table.” She added, “We just don’t have an announcement to preview right now on this. So I don’t have anything more to share on the domestic travel.” Despite the injection edict being temporarily halted by the Fifth Circuit Court of Appeals on employers with over 100 employees, the Biden dictatorship maintains, “everything is on the table.” Plus, the USSR style communist regime has made it clear it wants to extend the injection edict to employers with less than 100 employees.

Make no mistake in understanding their words. When this dictatorship announces, “everything is on the table,” it means exactly that.

If the USSR style communist dictatorship engaged in Nazi Germany type human experimentation can ascertain compliance of employers through the threat of force and exorbitant fines, it’s only a hop, skip and a jump to attempt compliance of consumers through the same tactics.

Want to go buy groceries for your family? Well, per the “everything is on the table” mantra of the current dictatorship, it will not be ruled out that you will need a gene therapy medical device bioweapon injection to do so.

The same goes for plumbing supplies, car maintenance, doctor and dentist visits, any public transportation, private transportation (Uber, Lyft, etc.), building supplies, lawn maintenance, tree services, optometry visits, gym patronage, access to government buildings and services, eating at restaurants, phone services, internet services, banking services, electrical and gas services, et. al. ad nauseum. Anything and everything that you can access falls under “everything is on the table.” Yes, it will include church gatherings, worship services, peaceable assembly, court appearances, and a host of other God-given individual unalienable rights the dictatorship assumes it can regulate.

Hospitals, particularly Emory University Hospital in Atlanta, Georgia, cardiology services that perform transesophageal echocardiograms stated to me that any patient who receives hospital services is “required” to have a COVID test or be injected with two gene therapy medical device bioweapon injections. No indication was given as to what would happen should the “test” be “positive”. And, in a video recorded with Morgan Memorial Hospital in Madison, Georgia, a nursing supervisor indicated they would not accept patients coming in as a transfer from another facility without a COVID test. Is it a far stretch to postulate that other hospitals are engaging in the same unlawful tactics? Not at all. It’s been reported by several outlets that individuals have been removed from the organ transplant recipient list for failure to have the “full course” of the gene therapy medical device bioweapon injections.

Bottom line, the dictatorship has “everything on the table” to attempt forced injection with bioweapons as a condition of participation in society. What’s worse is there are institutions and individuals going along with this tyranny – hospitals, doctors, nurses, employers, government agencies, etc.

What happens when access to police services, fire and paramedic services, ambulance services – the first responder units, are denied based upon injection status? Remember, “everything is on the table”. These services are performed by individuals, some whom agree with medical tyranny and who are willing to let people suffer and/or die based upon injection status. Why? Fear, comes to mind.

According to Infowars.com, “Around 20 per cent of Americans remain unvaccinated while 70 per cent have received both doses of the jab”. Is that really an accurate percentage of “injected” versus “uninjected”? Wasn’t the “original” percentage to “stem the ‘virus’” 70 percent? If that has been reached, why the continued push to force individuals into a state of medical tyranny that ultimately leads to slavery? And, if 70 percent have been “injected”, that would leave 30 percent of the population “uninjected”. If that missing 10 percent counts your offspring, well, the dictatorship is coming for them now. And, if that missing 10 percent includes those with “natural immunity”, the dictatorship is needling for you (pun intended).

Children are not affected by this supposed virus and many in the population have “natural immunity”, which means no injections are necessary. But, that does not matter to the dictatorship and its many minions doing the dastardly deeds of the dictator. The goal is not to ensure good health among the population; the goal is to condition individual participation in society upon having been injected with a bioweapon, while continuing to demoralize the population through face diaper wearing, quarantine, and “social distancing” – all measures that have no basis in preventing any type of illness. Those in the medical community doing the dastardly deeds know all of this. Yet, only a few are brave enough to stand up and expose it.

Many of today’s population have only read about the travesties that occurred in Nazi Germany, Stalin’s Russia, Mao’s China, Pol Pot’s Cambodia and other nations suffering under communist, dictatorial regimes. Some have remained clueless, even denying the atrocities that occurred – daring to take the “official narrative” as facts. There are survivors who have warned the population about the rise of these evil regimes and how these despots came to power. The survivors relayed actual events and experiences. Their historical recounts fell on deaf ears.

It took hundreds of thousands of “lackeys” of these dictators to achieve the goal of total control and tyranny over the people. These “lackeys” were friends, neighbors, and family members who inflicted atrocity upon their own people at the behest of a despot. Look at what’s happening now. Those who are inflicting the atrocities are doing so to their friends, neighbors, and family members. Doctors, nurses, first responders, and employers have friends, neighbors, and family. Yet, they are willing to callously say, “you receive no health care services” or “you cannot work here” without submitting to a dictator’s unlawful edict, all the while proclaiming “it’s protocol”, “I have no choice”, or “I’m just doing my job”. Where has all that been heard before?

Ask yourself why are some individuals – Congress, government agencies, etc. – exempt from the dictator’s edict? It’s a big club and you ain’t in it. Yet, there are countless individuals willing to do the bidding of the “club”, inflict atrocity upon their own people, and claim “immunity” through ridiculous justifications, only to be led to the slaughter later along with those who resist. And, don’t think for one minute that “everything is on the table” does not include gross democide of those who resist, refuse, or “know too much”. You are only fooling yourself if you ignore that scenario.

Boosters are here. Dr. Sherri Tenpenny and Dr. Larry Palevsky have indicated in their “Critically Thinking” videos there are already seven upcoming with over 100 in development. It is almost guaranteed that if the first two injections didn’t get you maimed, injured or killed, subsequent ones will if you submit to receiving the booster injections.