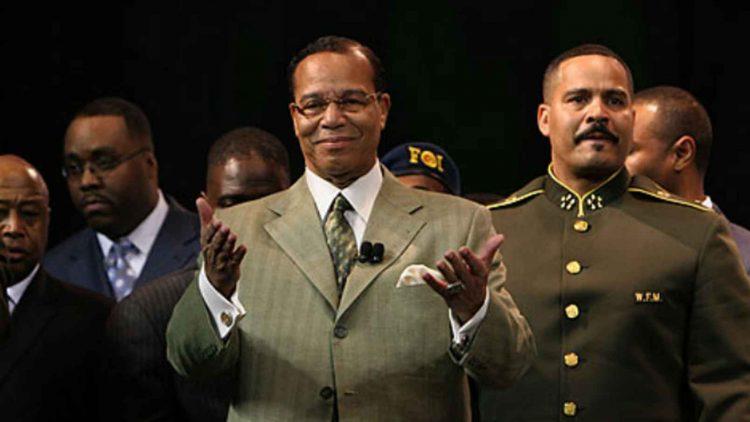 The Nation of Islam may be the largest racist religion in America. It is certainly the most influential with Louis Farrakhan’s original Million Man March drawing some 400,000 racists and allies of the hate group, including a young Barack Obama, who would later be photographed as a senator with the black supremacist leader at a Congressional Black Caucus event.

House Majority Whip Rep. James Clyburn, the third highest ranking Democrat, and the kingmaker who got Biden the Democrat nomination and the White House, had thanked Farrakhan for, “offering up a number of precepts that we ought to adhere to.”

Clyburn is one of a number of congressional Democrats who have Nation of Islam links.

Despite a history of violent terrorism by the Nation of Islam and its spinoff groups, its racist theology which believes that white people are subhuman devils who will be killed off, and its antisemitism and conspiracy theories, the hate group is also incredibly culturally influential.

Black Nationalist theology, politics and culture are built on the ideas of the Nation of Islam.

Raphael Warnock, the Senate Democrat from Georgia, said, “its voice has been important for the development of black theology.” He neglected to mention that he meant black nationalist theology of the kind trafficked in by Jeremiah Wright, Obama’s mentor, a Farrakhan supporter, and another ally of Warnock’s whose bigotry the Democrat politician had defended.

Culturally, a long list of musicians and other entertainers are fans of the Nation of Islam. The violent racism of Amiri Baraka (“dagger poems in the slimy bellies of the owner-Jews”), (“I got the extermination blues, jew-boys. I got the Hitler syndrome figured”), and (“Rape the white girls. Rape / their fathers. Cut the mothers’ throats”), distilled Nation of Islam theology into poetry.

“Jews double crossers stole our secrets crossed the white desert to spill them,” the former Poet Laureate of New Jersey wrote in The Black Man is Making New Gods. “The fag’s death they gave us on a cross… they give us to worship a dead jew and not ourselves.”

This is a brief summary of the narcissistic black supremacist theology of the Nation of Islam which believes that an evil Jewish mad scientist named Yakub (Jacob) used eugenics to create Europeans, Indians, and Asians from the original black master race after leaving Mecca.

That Baraka is remembered as a respected poet, that his hatefilled rants that would have made Goebbels blanch are taught in academic settings, is a tribute to how black nationalism mainstreamed hatred and the racist theology of the Nation of Islam into academia.

One of the most fundamental beliefs of the Nation of Islam is that white people aren’t human.

Some may remember Malcolm X ranting about white devils, at least until he dropped the NOI, in part over its alliance with the KKK, converted to normative Sunni Islam and was murdered by the Nation of Islam, but treated it as a commentary on segregation and racism in America.

TRENDING: Something More Important Than The Presidential Election

The Nation of Islam literarily believes that white people are an illegitimate race of devils created by a mad scientist who are “made by nature a liar and a murderer”. That belief is no longer confined to the racist hate group. It spilled into what Warnock misleadingly calls, “black theology” and into the foundational texts of what is even more misleadingly called “antiracism”.

As antiracism has taken off on college campuses and at major corporations, the old NOI belief that white people are not human has become the heart of a new breed of diversity training.

A Middlebury College lecture titled, Facilitate the Demilitarization of White Bodies, argues that, “Whiteness must be demilitarized so that bodies designated as ‘White’ might become human.”

Antiracist rhetoric that defines white people as non-human is commonplace in academic settings. For example, a University of St. Thomas course titled, “Becoming Human”, insists that “The only way to “become human” is to confront the legacy of white supremacy”. Its implicitly oppressive message is that people of all races and creeds who don’t define their sense of self through the warped funhouse Marxist mirror of critical race theory are not truly human.

Online antiracist seminars offer white people the ability to “Re-Become Human” by “healing from internalized whiteness”. While antiracism buries its dehumanization of white people and minorities opposed to the toxic racism of critical race theory under a slew of academic jargon and intersectional buzzwords, its underlying worldview is cultish and derived from a racist cult.

The Nation of Islam adopted and inverted racist white supremacist ideas. Its theology is a grabag of random elements looted from Islam, Christianity, and Judaism, along with a Science Fiction racialism assembled in an era when pseudoscientic mythologies had begun to pervade popular culture and breeding a master race through eugenics appeared to be on the horizon.

Antiracism not only doesn’t teach you how not to be racist, but is a bad copy of a bad copy of the KKK, which the Nation of Islam had allied with, and Hitler, whom black nationalists from Marcus Garvey to Louis Farrakhan had admired, run through an academic jargon filter.

Critical race theory is built around black nationalism. That’s why it explicitly rejects Martin Luther King Jr’s call for brotherhood and instead champions racial separatism and original sin. And black nationalism is just a copy of white nationalism complete with a master race and inferior races. The difference between racism and antiracism is that racists don’t deny they’re racist.

The much more fundamental difference between liberal tolerance and leftist antiracism is that the former believed that the core issue was hatred while the latter formulated it as power. That Marxist reading of race was destined to defeat the religious inflection of the old liberalism.

At stake are irreconcilable questions about hate, equality, and the nature of the society we want.

The old civil rights movement argued that we could achieve equality by letting go of hate. Black nationalist movements and their leftist allies found hate uplifting and didn’t want equality. The fusion of tribal racial hatred on one side of the partnership and Marxist reductionism on the other birthed a racist movement dedicated to perpetuating racism while calling itself antiracist.

Antiracism offers both black nationalists and white leftists what they want. Black nationalists receive uncritical affirmations of racial superiority and a license to hate, while white leftists are encouraged to dismantle their civilizations from buildings and statues to language and mores, in the name of combating a concept of whiteness that encompasses thousands of years of history.

The pivot for both sides is an idea copied from white supremacists by black supremacists.

The racist origins of antiracism are why its ideas inescapably manifest as racism. A movement whose guiding lights are racial supremacy and racial inferiority is not going to stop being racist, even if you pack it with academic jargon and then make sure to put “anti” in front of the “racism”.

The only way to pass off antiracism as anything other than racist is by redefining racism.

Antiracism, like every form of racism, distinguishes between justified and unjustified hatreds based on the moral superiority of one group and the moral inferiority of other groups.

Declaring white people to be less than human because they’re racist isn’t antiracism.

Nor is it some sophisticated idea processed through academia. It’s an argument put forward a century ago by the Nation of Islam, along with its fantasies about mad scientists creating the moon and white people, while its Shabazz leaders used Africa to breed a superior master race.

Racism is not, as white supremacists and their black supremacist imitators argue, our destiny. Hating other people is a choice that we make. Stopping it doesn’t require training, consultants, or a curriculum. Like any bad behavior, we can choose to stop it any time we want to.

Antiracism doesn’t stop racism. It enables the bad behavior while pretending to be fighting it. It’s the equivalent of giving an alcoholic a bottle of whiskey while labeling it “anti-whiskey”.

Confusing the issue with jargon, or by treating whiteness and blackness as not just races, but social concepts that permeate everything, doesn’t change the racist outcome. And the best evidence of whether an idea is racist is whether spreading it leads to more or less hatred.

Antiracism has made America a lot more racist and racially divided than it was in a long time.