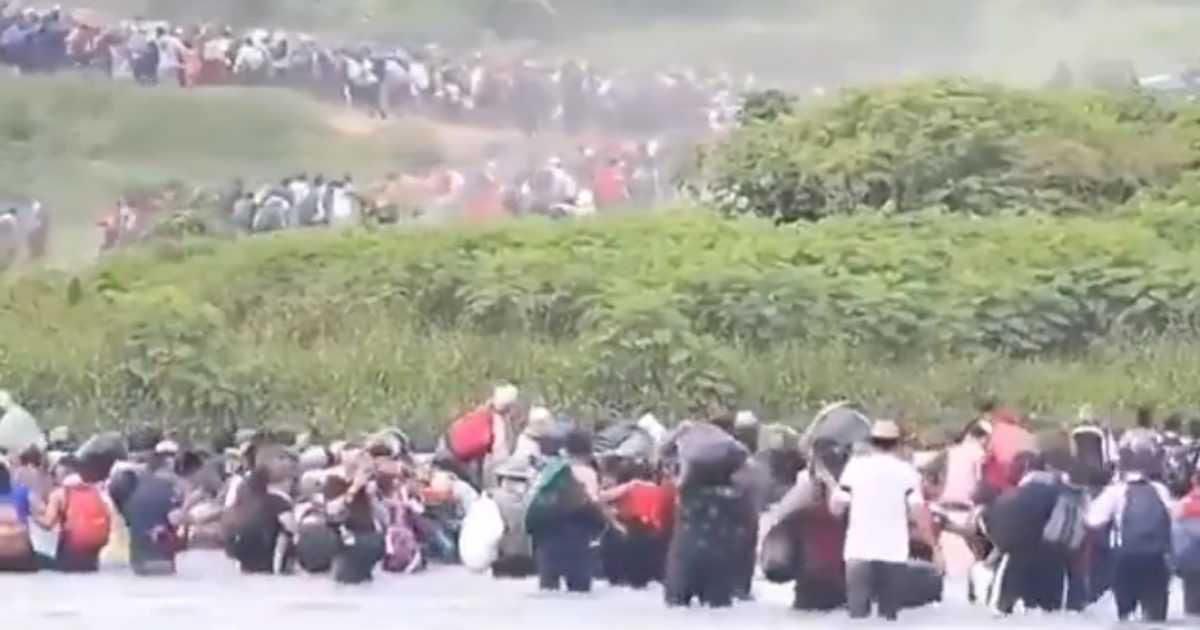 Clearly, these caravans are not set to be here tonight or tomorrow. These caravans are making their way to the US border nonetheless, and perhaps they will arrive and presume to settle in by the 2020 elections, mingling in, getting their fake documents breaking over 2 dozen of our laws besides illegally entering our country along the way. However, new video footage shows what looks like thousands of migrants in a caravan making their way across the Mexican border into Mexico.

Here are some catching a ride on trucks while others walk.

Actor James Woods tweeted out this video where it literally looks like thousands of these people following the river, literally.

The translated caption reads: “CENTRAL AMERICAN BROTHERS CROSS THE SUICHATE. Fleeing from poverty and violence, Central Americans make the third crossing to Mexico in caravan to the vain mirage of the “American dream.” Let us be in solidarity with your passage through our country.” (link)

According to the Conservative Treehouse:

It is important to remember, that video is from the third wave of migrants traveling from Guatemala, Honduras and El Salvador as they crossed into Mexico. Despite U.S. media downplaying the scale of the migration, the first wave (pictured below) was estimated, by Mexican media, to contain 14,000 migrants.

The first wave was estimated on October 22nd, at 14,000. The second wave crossed into Mexico last week around October 29th/30th (unknown number, but less than first).

The ‘third wave’ video from yesterday represents several thousand; and appears to be at least as large as the first wave from October 22nd.

Just days ago, I reported on videos that were captured as hundreds of migrants rushed through at Guatemalan customs checkpoint and others attacked the Mexican border.

As I said before, there’s no way, unless someone is picking these people up by airplane that they will get into the country tonight for voting tomorrow, though we know the Obama administration certainly did fly illegals across the country on taxpayer’s dime.

Already major news outlets and Facebook have pulled or simply will not run President Donald Trump’s ad campaign exposing the criminals in the caravan.

My guess is that if there is a huge win by the GOP on Tuesday, the news will begin to sink into many of these people’s heads and they’ll either turn around or try and settle where they are. It’s pretty clear that Mexico isn’t doing anything about this.

This leads me to ask a very serious question: Is President Trump prepared to have our military fire on these illegals should they reach our border and attempt to cross in the face of Border Patrol and our military? What other options are there? From what I’ve seen in previous videos, these people are not easily dissuaded.