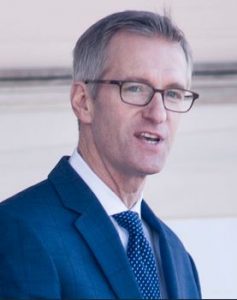 Portland, Oregon has now had more than 100 consecutive nights of violent mayhem by Antifa and BLM anarchists and thugs.

The epitome of so-called “white privilege”, Wheeler is a 6th-generation Oregonian, born to and heir of a conservative wealthy family who made their fortune in the timber industry. Wheeler worked in the financial services industry for corporations including Bank of America and Copper Mountain Trust before entering politics in 2006 as a registered Republican when he was elected Multnomah, OR county commissioner.

In 2010, he was appointed State Treasurer by Oregon’s Democrat governor Ted Kulongoski. Later that year, Wheeler switched party and won the Democrat primary for Treasurer; in 2013, he was elected Treasurer in a special election. Three years later, in 2016, Wheeler was elected mayor of Portland with 54% of the vote.

George Floyd protests began in Portland on May 28, 2020. Initially peaceful, the protests turned into a riot two days later on May 30. Despite that, on June 9, Wheeler proposed the defunding of three Portland police units, including the gun violence reduction team; the “diversion” of $12 million from the police bureau and other city departments to support “communities of color”; and banning officers from using chokeholds. On June 17, the Portland city council defunded the city police by cutting at least $15 million from the police department and eliminating 84 positions.

In early July, the federal government deployed law enforcement officers to Portland for the stated purpose of protecting federal property, including the U.S. courthouse that repeatedly had been vandalized since June. The federal officers made arrests and fired pepper spray or tear gas at protesters who got too close to the courthouse. Ted Wheeler and Oregon’s Demonrat governor Kate Brown denounced President Trump’s deployment of federal officers to protect federal property in Portland.

On August 28, Wheeler wrote an open letter to President Trump asking him not to send the National Guard to the city, saying that “We don’t need your politics of division and demagoguery.” This, despite the fact that a year ago in August 2019, Wheeler had requested that the National Guard be on standby in anticipation of a potentially explosive stand-off between Antifa demonstrators and “far-right” groups. Gov. Brown denied Wheeler’s request.

On September 1, 2020, after Antifa rioters attacked, vandalized and burned a fire in the apartment building in which Wheeler has a condo, he said he would move out “for the safety” of the apartment’s residents.

Here on Fellowship of the Minds, we have wondered why Portland residents are tolerating the continuous, unceasing nightly riots and mayhem — of arson, vandalism, looting, toppling of statues, assaults, and the shooting death of a Trump supporter. Some of us speculate that Portlanders are not doing anything about the continuous riots because they fear being targeted and attacked.

But their silence and do-nothing do not mean approval.

Everton Bailey Jr. reports for Oregon Live, Sept. 8, 2020, that two months ahead of the November 3 election (and Wheeler’s reelection), a new poll shows that 63% or two-thirds of likely Portland voters have an “unfavorable” impression of mayor Ted Wheeler.

That finding has been trumpeted by conservatives, including talk radio titan Rush Limbaugh, as a sign that the tides are turning.

My reaction to the poll is one of incredulity . Only two-thirds of Portlanders disapprove of their mayor? That means as many as a third of Portland voters actually approve of Wheeler’s handling of the continuous riots?

Here are some other findings of the phone and online poll of 435 “likely” Portland voters, conducted by California-based FM3 Research, which indicate that Portlanders haven’t really changed: