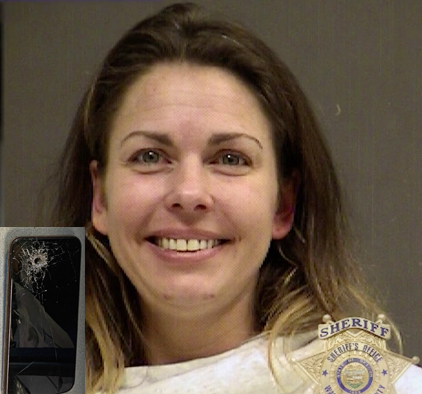 So many reasons to murder your phone!

We’ve all been there: no service, or stalled updates. It won’t recognize your thumbprint, or your battery craps out at the precise moment you need it most. It’s just a phone—right? A person shouldn’t go to jail for shooting one. Heck, some phones NEED killing!

So why was Rosemary singled out? She does live in Oregon, where practically everything is protected—but a phone? Are smartphones now on the endangered species list in Oregon? Have personal communication devices reached the status of personhood? What has Tim Cook been up to? I know Apple iPhones are in a serious global slump…maybe it was a mercy killing!

To understand Rosemary’s situation, we have to go back to New Year’s Eve in Portland. Everyone else is out partying with friends, but Rosemary is home alone—just her and her phone, and maybe the Hallmark channel…we don’t know that part. There’s actually a lot we don’t know about what lead up to this violent act.

Some seem to think she may have gotten dumped via text message, while others surmise it could be seasonal affective disorder. God, it is so gloomy in Portland in the winter, who could blame her? Everyone is reveling and she is staring out a rain-streaked window at a gray landscape–with a phone in one hand, and her 9mm in the other.

Maybe shooting her phone was the best option at the moment, certainly better than the alternative! Maybe she had spent hours on New Year’s Eve staring at her phone, desperately waiting for it to ring. One reporter speculated that Rosemary was trying to do a selfie with the pistol pointed at the screen when it went off. If so, you’ve got to wonder who she was sending that one to!

With all the publicity about cell phone radiation, maybe it was self-defense. Cell phone manufacturers desperately trying to hide deadly radiation risk from consumers

Well, whatever the reason, thirty-five-year-old Rosemary Ancharsky saw the new year through jail bars. Maybe if she hadn’t shot through the phone into her neighbor’s apartment, the crime would never have been discovered. Her phone might have eventually been reported missing, but probably not. A late-night trip across Ross Island Bridge, and a flick of the wrist, and the evidence would disappear forever!

Give the girl a break!

Some neighbors have no sense of humor. What’s a little gunplay on New Year’s Eve? So the round went through her phone and two walls, into the adjacent apartment bedroom. No one was actually injured, and what a great story to tell your friends, plus you get to be on the local news. This was clearly (phone excluded) a victimless crime.

Control Criminals and Crazies, Not Guns

Unfortunately, the police didn’t see it as “just clean fun,” and they hauled our friend off to the slammer. Rosemary was charged with reckless endangerment and unlawful use of a weapon. Who knew it was unlawful to use a pistol to murder your phone? That’s just more Oregonian liberal nonsense.

While you are here, why don’t you clickone or both of the links below and visit our sites for “fresh daily” news and opinion.