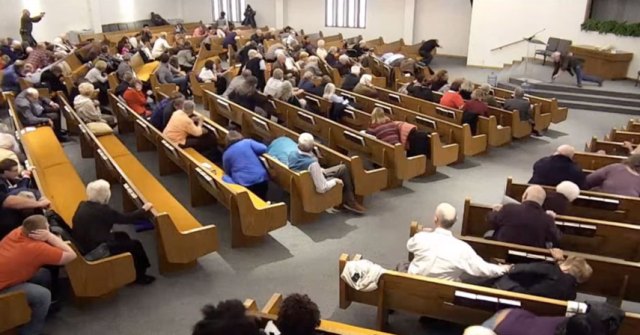 With their gun-free zones, every wannabe terrorist knows that US military installations are soft targets. All they have to do is manage to find a way onto an installation, and the carnage begins. Should our top military brass be supporting anti-gun policies that get their troops shot down in cold blood, right here in America?

Our base personnel would be safer in Jack Wilson’s church in Texas than on a military installation. It took Wilson six seconds to neutralize an armed killer, and it took the armed response at Pensacola fifteen minutes; that was seven minutes to arrive and eight to engage and neutralize the threat. Even then it was the brave members of the Escambia County Sheriff’s Office, not base security, who took down the shooter, getting wounded in the process.

Fifteen minutes was enough time for the Saudi terrorist to casually move from room to room, and floor to floor, to hunt down and kill three sailors and wound eight other people, including the two deputies. Think about it, this was a US military installation which should have been on high alert after the previous base shooting. US military security forces were either inept or poorly trained. Are these the same people who guard our bases in the Middle East?

Church security was disciplined and well-trained

If you watch the entire video of the White Settlement church shooting, you see at least six parishioners moving toward the shooter, weapons drawn. An armed female was ushering the congregation to safety. It looked like a well-oiled machine—a security detail that had been trained and followed through. Even though the shooter was down, they each kept their weapons on the threat until given the all-clear.

How is that possible? Is base security understaffed? Do they lack confidence? An article in the Pensacola Statesman had this:

A spokesman for NAS Pensacola said that the Navy and local law enforcement have a partnership in place to do joint active shooter response drills and to assist each other during major incidents. “We responded, and the Sheriff’s Office responded very quickly right after,” Jason Bortz, a spokesman for NAS Pensacola, said. “We work together, and they were great to work with.”

What??? Pensacola says they responded and the deputies responded “right after”? How did two deputies manage to locate this Muslim jihadi in a building they weren’t familiar with, exchanging gunfire on two different levels of the building, and the base security never arrives—until it’s over?

In case you didn’t hear about it, two Marines ran toward the fire as people were running out of the building, grabbing a fire extinguisher off a wall as their only weapon. The shooter had moved out of the area so they began rendering first aid to the wounded.

Even the Florida Governor got into the act during a visit, but never uttered a word about the military changing its policy regarding arming our military on US bases.

“I can tell you lives were saved because of the response of people both in uniform for the Navy and in uniform with Escambia County,” DeSantis said. “In one of the darkest days in the base’s history, you still saw some of that bravery and grit come out, even in people who had been wounded themselves, thinking about others and what could be done to save others.”

There is only one single reason base commanders are unwilling to allow military personnel to be armed. They fear a career-ending event that they would be held responsible for. If a killer gets on the base with a gun, it is rare for the base commander to be held responsible, but if a legally armed servicemember were to misuse their firearm, accidentally, or with malice, the commander would be hung out to dry because he/she/it would have broken with protocol.

In other words, until all bases allow qualified service members to be armed while on the installation, no individual commander will take a chance with having a more liberal weapons policy.

US Military Installations Are War Zones

What is the big deal anyway? These same military personnel, prohibited from being armed on American bases, carry weapons while stationed in combat zones—why not in the US? It’s time that these career-minded military commanders change base policies instead of mumbling platitudes at funeral services.

Radical changes protecting the lives of currently-unarmed service personnel will not happen until the command comes down from the top brass. President Trump, please encourage the upper echelon of military commanders to make these changes before more sons and daughters are killed by terrorists right here in the nation they have sworn to protect.