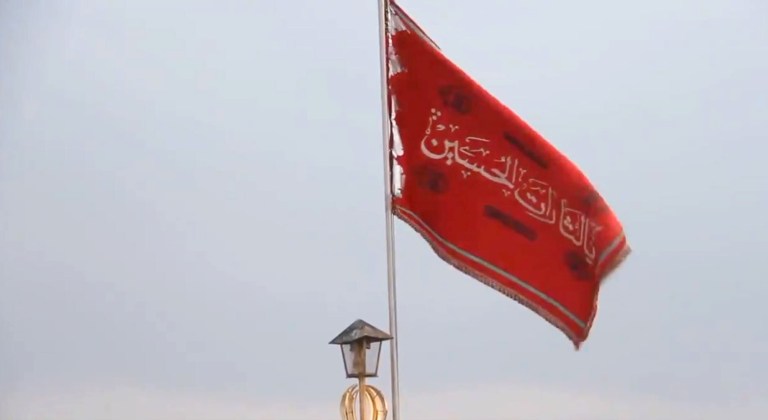 For the first time ever, a blood red flag is being flown over the famous Jamkaran Mosque in the Iranian “holy city” of Qom. If you have not see it yet, you can watch it being raised right here. And as I will explain below, the fact that this mosque is directly associated with the Mahdi makes this symbolic gesture doubly significant. The hoisting of this flag was broadcast on Iranian state television, and it was obviously intended to send a message to Shiites all over the globe. So precisely what was that message? Well, we are being told that according to Shiite tradition a red flag represents both “blood spilled unjustly” and a call for revenge…

Red flags in Shiite tradition symbolise both blood spilled unjustly and serve as a call to avenge a person who is slain.

It is the first time in history that the red flag has been hoisted on top of the Jamkaran mosque in the Iranian city and comes after warnings of harsh retaliation against the US.

Red flags have also been spotted flying at anti-U.S. demonstrations in Tehran over the past few days.

Clearly, the Iranians want blood. They will never, ever forgive us for the killing of Qassem Soleimani, and their faith requires that he be avenged.

There is also a message inscribed on the blood red flag that is now flying above the Jamkaran Mosque, and apparently it is a reference to the death of the grandson of Muhammad…

The flag, inscribed with the words “Those who want to avenge the blood of Hussein,” was hoisted above the mosque’s shrine for what local reports claimed was the first time in history, according to the Daily Mail.

The grandson of Muhammad, Hussein was decapitated in A.D. 680 during the Second Islamic Civil War, when Muslims were fighting over who was the proper successor to their prophet. The act was met with bloody retaliation from Muslims who considered Hussein’s death unjust and sought to avenge him.

Obviously the Iranians are viewing this as something much bigger than simply extracting sufficient revenge for the death of a deeply loved national leader.

Rather, they seem to be using this moment as a call to wage jihad against all of the enemies of Shia Islam.

And as I mentioned above, the fact that this flag was raised over this particular mosque is a very big deal.

The Jamarkaran Mosque is considered to be one of the holiest sites in Shia Islam, and it is also associated with the future reappearance of the Mahdi. In fact, as the flag was being hoisted there was a direct reference to the Mahdi…

As the flag was raised in Qom, the mosque speakers called, ‘O Allah, hasten your custodian reappearance,’ a reference to the end-times reappearance of the Mahdi.

In Iran today, most of the national leaders believe that the 12th imam, Muhammad al-Mahdi, was born in Iraq in 869 and never died. Just before judgement day, the Mahdi is supposed to reappear along with Jesus during a time of war and chaos “to bring peace to the world and establish Islam as the ruling faith across the globe”. It is also commonly believed that the Mahdi is coming very soon, and so that explains why so many top Iranians seem to relish the thought that war could be coming. They need war to come first in order for the Mahdi to appear, and since the Mahdi is supposed to return during the coming apocalyptic war and establish Shia Islam as the faith of the entire planet, they aren’t exactly too concerned about the threats that President Trump is making.

It is so important to understand the mindset of these radical Shiites.

If they die as martyrs, they will be rewarded as such in the afterlife.

If they live through the coming holy war, they will get to see the coming of the Mahdi, and they will help to institute the global rule of Shia Islam.

So in either case, they believe that they can’t lose.

At this point, what they want is blood. In fact, even the daughter of Qassem Soleimani is asking for vengeance. Just check out what she just asked Iranian President Hassan Rouhani…

‘Who is going to avenge my father’s blood?’ One of the commander’s daughters asked.

In response, Rouhani promised her that ‘everyone will take revenge’ and assured her as she wept, ‘we will, we will avenge his blood, you don’t worry.’

There is no question that Iran is going to strike back.

And it won’t just be a one time deal. They are going to hit us repeatedly, and they have already identified 35 potential targets…

IRAN today pinpointed 35 “key US targets” for revenge after its top general was assassinated – with America expecting retaliation “within weeks”.

Hours later, rockets were fired near the US Embassy in Baghdad and at an airbase housing American troops, according to reports.

Unfortunately, we didn’t have to wait long for the violence to begin. In fact, the Green Zone in Baghdad has been targeted by rockets for two days in a row…

At least three explosions were reported Sunday inside the heavily-fortified Green Zone — which houses the U.S. Embassy, Balad Air Base and Iraqi government buildings — in the second attack of its kind after the U.S.-led airstrike that killed Iranian Gen. Qassem Soleimani.

A total of six Katyusha rockets — three inside the Green Zone and three in the nearby Jadriya area — hit Baghdad, according to a statement by Iraq’s military, as Reuters reported.

Of course President Trump is not going to put up with this, and he has warned the Iranians that he has identified 52 Iranian targets that could potentially be hit…

Showing no signs of seeking to ease tensions raised by the strike he ordered that killed Soleimani and Iranian-backed Iraqi militia leader Abu Mahdi al-Muhandis at Baghdad airport on Friday, Trump issued a threat to Iran on Twitter. The strike has raised the specter of wider conflict in the Middle East.

Iran, Trump wrote, “is talking very boldly about targeting certain USA assets” in revenge for Soleimani’s death. Trump said the United States has “targeted 52 Iranian sites” and that some were “at a very high level & important to Iran & the Iranian culture, and those targets, and Iran itself, WILL BE HIT VERY FAST AND VERY HARD.”

Following that tweet, many on the left harshly criticized Trump for potentially targeting cultural sites, but Trump subsequently doubled down on that threat…

“If they do anything there will be major retaliation.”

Does anyone see a way that war with Iran can be avoided at this point?

Because I certainly don’t.

The Trump administration and the Iranians will both keep escalating things until a full-blown cataclysmic war erupts in the Middle East, and it will be a war that will inevitably involve Israel as well. This Middle East war will greatly accelerate the development of “the perfect storm” that I keep talking about, and none of our lives will ever be the same again.

Those that think that this is a crisis that will blow over in a few days or a few weeks are not being rational.

The Iranians will never, ever, ever forgive what Trump has done, and Soleimani’s successor is assuring everyone that we will soon “see the bodies of Americans all over the Middle East”…

“Be patient, and you will see the bodies of Americans all over the Middle East,” Ghaani said.

There is no stopping this now.

War is coming, and the death and destruction it will bring will shock the entire planet.