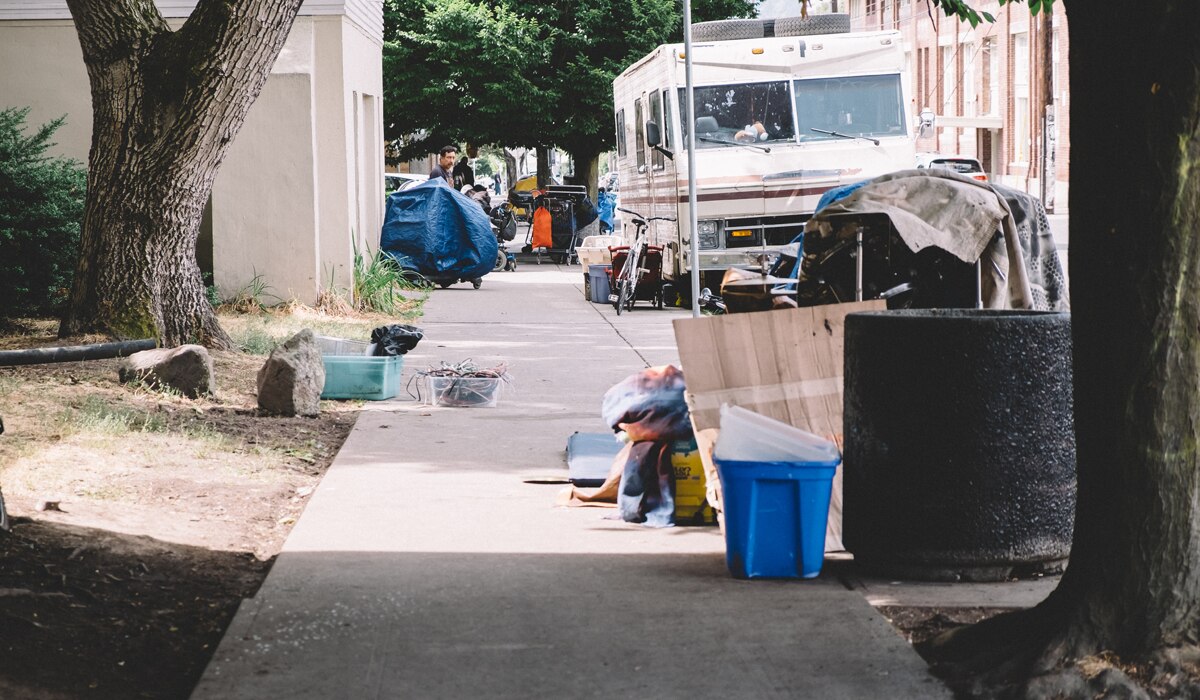 The alleys of Portland, Oregon, are strewn with piles of garbage and used drug needles, reflecting a growing problem of homelessness, drug addiction, and mental illness.

Mental illness is now more common among the homeless in Oregon than in any other state. According to a study from 2016, 35-40% of homeless adults in Oregon suffer from some form of mental illness.

The problem is apparent along the Springwater Corridor, a popular biking trail on the east side of Portland that is cherished as peaceful slice of nature hidden from the urban sprawl.

In 2016, a shantytown alongside a 2-mile stretch of the corridor was the largest homeless encampment in the nation. It contained nearly 200 tents and an estimated 500 homeless people.

In the years since, criminal activity has become a routine occurrence. For example, in August 2018, police arrested a homeless woman for attempting to kidnap a 6-year-old girl playing near the trail. Two months later, a shooting occurred.

This year, an assailant stabbed a man in the arm before fleeing back into the sea of tents.

Unfortunately, the Springwater Corridor is no exception in Portland—it is a microcosm of Oregon’s largest city.

In 2018, Portland was home to an estimated 14,000 chronically homeless people, the vast majority of whom were in Portland, according to the Department of Housing and Urban Development.

The Portland Police Department has no official policy on clearing out the camps or relocating homeless individuals. Third parties now shoulder the burden of coordinating with the city and obtaining police protection in cleaning up the camps.

Local officials claim to be pursuing solutions, but the “solutions” offered thus far—affordable housing bonds and refusing to enforce prohibitions on camping on public rights of way and in city parks—do nothing to address the lack of mental health treatment and drug abuse problems at the root of this humanitarian crisis.

Nor is this a recent phenomenon. The neglect spans decades.

Oregon first opened the doors of Dammasch State Hospital in 1961 with the aim of treating those afflicted with mental illness. The facility was meant to relieve overcrowding at the larger state hospital in Salem.

More and more individuals flooded into the asylum, and by the 1980s, the newer hospital had also exceeded capacity. The overcrowding, combined with widespread abuse toward patients, worsened.

Rather than reform the mental health treatment system, the state simply closed Dammasch in 1995, releasing the patients—ill-equipped to function independently—onto the streets of Portland. Nearly 25 years later, the homeless, many of whom are addicted to drugs, remain on the streets in the same abhorrent conditions.

In 2016 alone, Portland police seized about 284 pounds of heroin and meth. But those who are afflicted by addiction often never have to confront their habit, at least not due to legal consequences.

Oregon’s drug policy is defined by leniency. Police have neither the resources, nor the backing of their superiors to arrest an individual for being on drugs in public or for having drugs on their person. In practice, heroin and meth are legal.

Resolving the homelessness crisis requires us to acknowledge the humanity of those afflicted. They are not human refuse; they are people, albeit badly broken.

But fixing the problem requires more than just a token verbal acknowledgment. Part of recognizing their humanity is understanding that the homeless are not merely victims of circumstance. They need help taking the first steps toward reclaiming their lives.

The situation has gotten so bad that it now demands aggressive action at both the city and state levels. The police must be empowered to disperse these camps. Courts should require those in violation of drug laws to seek treatment.

Community detox centers in Portland should become core to the solution. These centers already offer the homeless training in job and social skills. These locally based organizations directly target drug and mental illness issues, but they are underutilized because the city has turned a blind eye to illicit drug use and continues to tolerate street camping.

Another key part of the solution is to give renewed focus to mental health treatment. Sometimes, that may require at least a temporary respite from independent living. Both the general population and the homeless are put at risk by the current situation.

To better serve these individuals, we must remove the stigma surrounding mental health treatment and replace it with understanding. That may be the only hope for these individuals to regain safe, productive lives.

Douglas Blair is a member of the Young Leaders Program at The Heritage Foundation.

Joel Griffith is a research fellow in the Roe Institute at The Heritage Foundation.